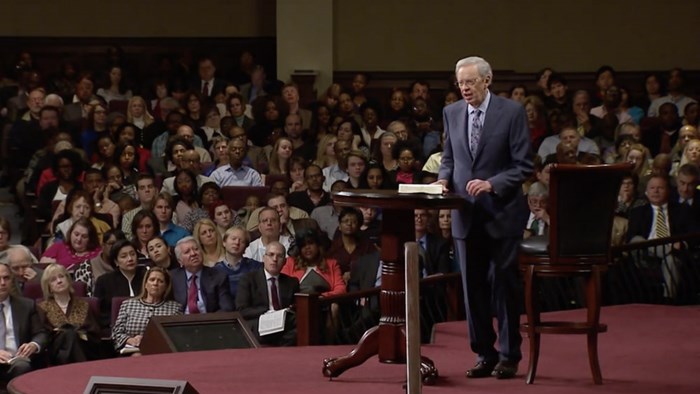 Charles Stanley has been spending more time with family since he stepped down as pastor of First Baptist Church Atlanta in 2020. He has continued his schedule of preaching on TV and radio with In Touch Ministries. And he is working on a book about prayer that will be released this fall.

He has not started a new business selling gummies and other products infused with cannabidiol (CBD), a compound extracted from the marijuana plant.

Enough people thought the longtime Southern Baptist pastor, considered one of the best evangelical preachers of his generation alongside Billy Graham and Chuck Swindoll, might have gotten into the CBD business, however, that In Touch Ministries released a warning on Saturday: “IT IS A SCAM.”

“Dr. Stanley has not begun any new venture,” the official statement said. “Scammers are attempting to trick you into giving your personal information or infect your electronic devices by using Dr. Stanley’s image.”

In Touch Ministries staff have reported the false advertising to Facebook and other social media sites selling “Charles Stanley CBD gummies” and “Charles Stanley CBD oil,” but new ads—with the preacher’s name superimposed over a large marijuana leaf, or the preacher’s name next to a spilled pile of glistening gummy bears—have appeared to replace them.

“Our social media team has been working with Facebook to quickly remove these false ads as soon as we are alerted to them,” Seth Grey, an In Touch Ministries spokesman, told CT. “Unfortunately, as soon as one ad is removed, another pops up in its place.”

And just to be clear: “This is false and Dr. Stanley does not endorse anything like this,” Grey said.

The false advertisements seem to have started back in April, beginning simultaneously on multiple websites registered in Iceland. Some of the sites were started right before the scam began, while others have previously advertised the same CBD products with other celebrities’ names, including Oprah Winfrey and Martha Stewart.

A second wave of websites, designed to look like news outlets with names like “24x7 News” and “Big News Network,” pretended to review the product in May and June. Each piece ended with a large red button to buy the product.

The promotional material was all written in garbled English, infused with health and fitness buzzwords.

“Charles Stanley CBD Gummies are one of the most selling and effective health improvement products that are constituted from various herbal and natural ingredients that are pure and natural to help consumers to get over various mental and physical health issues such as anxiety, depression, stress, mental headache, sleeping disorders, acne issues, heart diseases, etc.,” said one website.

Another explained that with this miracle product, “one’s wellness, namely in terms of inflammation and related health consequences is believed to gradually reverse with time.” The phrase “health consequences” linked to an advertisement on another site designed to look like a news report on a safe herbal ingredients.

One of the fake reviews said that “Charles Stanley CBD Gummies Gummies have 600mg of unadulterated, top-notch CBD to assist you to really feel extraordinary without the substantial!” and concluded, “CBD is as of this moment astonishing the us.”

The artificial English, snake-oil promises, and nonsense “reviews” serve as a backstop for the social media ads, providing an appearance of legitimacy to convince computer algorithms and anyone doing a quick Google search that Charles Stanley CBD gummies do, in fact, exist.

They don’t, but these scams do work, according to consumer protection advocates. The Better Business Bureau has documented more than 400 people taken in by CBD scams in the US in the last five years.

Others, signing up for a “free sample,” agree to pay shipping and handling and then later find their bank account charged hundreds of dollars month after month. There is no established estimate of how much money is stolen this way every year.

In some cases, however, the product does exist. It’s just the endorsement that is not real.

The Charles Stanley CBD ads link to gummies and oils that are actually sold by a company called Smilz, which is owned by a self-described “serial entrepreneur” and “mind/body transformation guru,” named Jas Mathur. According to an advertisement designed to look like an article in USA Today and other media outlets, “Jas is a testament to a hidden truth of progress: one can only behave according to what they believe they can do and when he sets his mind, Jas can do anything.”

Whether Mathur is behind the ads claiming Stanley’s endorsement for CBD products or there are other parties involved is unclear. The company’s public relations firm did not respond to a request for comment.

Scammers seem to choose famous people with a very broad fan base and a well-established reputation for reliability. Actors Morgan Freeman, Jennifer Anniston, and Sandra Bullock have all had their names and images misused in this way. The fact checking site Snopes investigated whether Tom Selleck is a spokesman for CBD oil. He is not.

Tom Hanks’ name has been used to sell CBD twice, sending the actor to Instagram to make a statement.

“I’ve never said this and would never make such an endorsement,” wrote the star of Forrest Gump, Saving Private Ryan, Sleepless in Seattle, and Toy Story. “Come on, man. Hanx!”

Stanley did not address the scam during his televised sermon on Saturday, but he did preach about the dangers of deception.

“When the Holy Spirit is within you, you’ll have foresight,” he said. “You’ll be able to see things that look like one thing when they’re another. You’ll be able to discern deception and know that what you’re seeing is a lie.”

Stanley said we can ask God to help us recognize counterfeit promises of “joy and peace and happiness and prosperity” as “one big Satanic lie.”

Then he went back to not selling CBD products.