Masterpiece Cakeshop owner is now in a legal battle with a customer who put in an order to celebrate her gender transition.
Colleen Slevin – Associated Press |March 24, 2021 08:54 AM 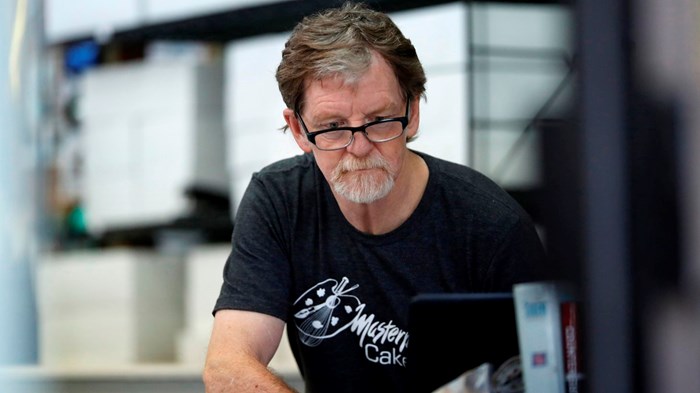 A Colorado baker who won a partial victory at the US Supreme Court in 2018 for refusing to make a wedding cake for a same-sex couple went on trial Monday in yet another lawsuit, this one involving a birthday cake for a transgender woman.

Autumn Scardina attempted to order the birthday cake on the same day in 2017 that the high court announced it would hear baker Jack Phillips’s appeal in the wedding cake case. Scardina, an attorney, requested a cake that was blue on the outside and pink on the inside in honor of her gender transition.

Her lawsuit is the latest in a series of cases around the US that pit the rights of LGBTQ people against merchants’ religious objections, an issue that remains unsettled by the nation’s top court.

On Monday, during a virtual trial being conducted by a state judge in Denver, Scardina said Phillips had maintained that, as a Christian, he opposed making the gay couple’s wedding cake because it involved a religious ceremony but would sell any other type of product.

She said she called Phillips’s Masterpiece Cakeshop to place the order after hearing about the court’s announcement because she wanted to find out if he really meant it.

When her lawyer Paula Greisen asked whether the call was a “setup,” she said it was not. “It was more of calling someone’s bluff,” she said.

In opening arguments, a lawyer representing Phillips, Sean Gates, said his refusal to make Scardina’s cake was about its message, not discriminating against Scardina, echoing assertions made in Phillips’s legal battle over his refusal to make a wedding cake for Charlie Craig and Dave Mullins in 2012. With Phillips getting media attention since then, he could not create a cake with a message he disagreed with, Gates said.

“The message would be that he agrees that a gender transition is something to be celebrated,” said Gates, who noted later that Phillips had objected to making cakes with other messages he opposed, including Halloween items.

Before filing her lawsuit, Scardina filed a complaint against Phillips with the state, and the Colorado Civil Rights Commission found probable cause that Phillips had discriminated against her. Phillips then filed a federal lawsuit against Colorado, accusing it of waging a “crusade to crush” him by pursuing the complaint.

In March 2019, lawyers for the state and Phillips agreed to drop both cases under a settlement which still allowed Scardina to pursue a lawsuit on her own. At the time, Colorado Attorney General Phil Weiser said both sides agreed it was not in anyone’s best interest to move forward with the cases.

The US Supreme Court ruled in 2018 that the Colorado Civil Rights Commission showed anti-religious bias when it sanctioned Phillips for refusing to make the same-sex wedding cake for Craig and Mullins. However, the justices did not rule on the larger issue of whether businesses can invoke religious objections to refuse service to gays or lesbians.

The court is currently considering a related issue in a case over whether a Catholic social services agency can refuse to work with same-sex couples as foster parents in Philadelphia.