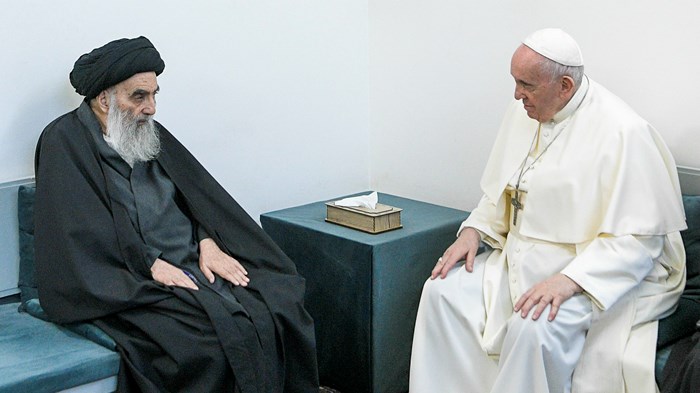 Pope Francis, a “pilgrim of peace” to Iraq, has made history by becoming the first pontiff to meet a grand ayatollah: Ali al-Sistani, whose hawza (seminary) in Najaf, 100 miles south of Baghdad, is considered the foremost center of learning in Shiite Islam.

Two years ago, the pope met the grand imam of Egypt’s al-Azhar, considered the foremost center of learning in Sunni Islam. With Ahmed al-Tayyeb, Francis signed the “Declaration of Human Fraternity,” calling on both Christians and Muslims to embrace religious diversity with freedom and respect.

This weekend, Francis came to Iraq to support and encourage the nation’s beleaguered Christians, whose numbers have decreased from 1.4 million in 2003 to about 250,000 today.

But he also wished to sign a similar document with the reclusive leading figure in Shiite Islam, which represents 1 in 10 of the world’s Muslims—and 6 in 10 Iraqis.

The result with Sistani was more modest than with Tayyeb, but Francis did secure a very important fatwa (religious ruling).

“[Christians should] live like all Iraqis, in security and peace and with full constitutional rights,” said Sistani in an official statement. “The religious authority plays [a role] in protecting them, and others who have also suffered injustice and harm in the events of past years.”

Francis removed his shoes upon entering Sistani’s modest home. And while the ayatollah usually sits to receive visitors, he stood to welcome the pope.

Will the ruling make a difference? Will it have any impact in Iran, the neighboring theocratic Shiite state? And what really drives the regional conflict: religion or politics?

In Muslim history, the answer is both.

While differences exist in rituals and theology, Shiism emerged in a dispute over succession to Muhammad, in both his religious and political roles.

Sunnis believe that Muslims chose Abu Bakr to serve as the first caliph—which means successor in Arabic—after Muhammad’s death. This process continued for the three leaders who followed his rule, who were selected from among the pious in the community.

But Shiites believe that the fourth caliph, Ali, Muhammad’s cousin and son-in-law, was the prophet’s original choice, passed over by conspiring Muslims.

When Ali was assassinated in A.D. 661, a usurper took his role and established the family-based Umayyad dynasty. Ali’s two sons chose different paths of resistance, trying to reclaim their rightful place of leadership. Hassan, the older, was eventually poisoned. Hussein was killed in battle and heralded as a martyr.

Ali’s shrine is located in Najaf, the site of Sistani’s hawza.

Sunnis hold that the caliphs were simple political leaders. But Shiites hold that Ali was an imam, possessing spiritual authority that passed on to those who succeeded him. Shiites divided into many sects disputing this line of succession. But the majority hold that the 12th imam disappeared mysteriously in A.D. 874 and one day will reappear from occultation as a messiah figure alongside Jesus to establish the true Islamic state.

Yet ever since the death of Hussein, Shiites—which means “party of Ali” in Arabic—were on the losing side of Islam’s political struggles. And when the 12th imam vanished, they had no formal leader.

About 170 years later, clerics coalesced in Najaf to chart the course for the Shiite sect. Though not a formal institution like the Vatican, the office of the Grand Ayatollah emerges from the consensual esteem of Shiite colleagues acclaiming their top religious scholar.

Every scholar is known as a mujtahid (legist, or legal expert), who can risk declaring himself a marja’ (reference, or source to follow) in hope of attracting followers. Among their authority is collecting the khoms (fifth), and distributing this 20 percent tithe on profits for the good of the community.

But their main duty is to issue fatwas advising on right conduct in real-life circumstances, which Shiite Muslims who claim a given scholar as a reference are duty-bound to follow.

The political philosophy Shiites developed was to accommodate with the ruling power. Yet they never accepted the caliph’s legitimacy, believing only the hidden successor to Ali rightly bore the title of imam. But to keep the peace and protect the Shiite community, the grand ayatollah did not foment rebellion.

In 2004, after the fall of Saddam Hussein, Sistani’s fatwa legitimized democratic elections. And in 2019, he forbade violence against peaceful mass demonstrations, backing participants’ rights as citizens to protest government corruption.

But historically, accommodation did not spare the Shiites from persecution by Sunnis, as they failed to signal complete allegiance to the political inheritors of Muhammad. In response, they developed the practice of taqiya (dissimulation), in which hiding their religious identity and heterodox practices became a permissible response under duress.

Concentrated in Persia and Mesopotamia, Shiite communities emerged elsewhere in the Levant, Arabian Peninsula, Pakistan, Afghanistan, Indonesia, and for a while even held power in North Africa, where they founded Cairo’s al-Azhar. But it was not until the 16th-century Safavid Empire established by the Kurds that Shiites ruled over a majority Shiite population.

The ruling kings looked to emulate Sunni practice and establish a recognized religious authority. But the majority of Najaf clerics resisted, holding to the tenet that joining a regime would impinge upon the legitimacy due only to the hidden imam.

Yet a seed was planted, which eventually blossomed in the Ayatollah Khomeini.

While the Arab scholars in Najaf kept to their medieval traditions, the non-Arab Persian Shiites began to assert an independent path. With origins in the 10th century, the hawza of Qom, 90 miles south of Tehran, became favored by the Safavids. But it was not until 1922 that the seminary was re-established, to struggle with the modern world.

Clerics in Qom grew conversant with Marx. They sided with the people against the ruling shah. And when the Ayatollah Khomeini returned to Iran from exile in France in 1979, he brought with him a marginal Shiite theory called Wilayat al-Faqih.

Translated as “Guardianship of the Jurist,” it posited that the hidden 12th imam had delegated his full authority to the top cleric to rule in his stead. Mobilizing politically, Khomeini seized control of Iran’s revolution and marginalized all others to establish this theocratic legitimacy. And the clerics of Qom, willingly or otherwise, produced the scholarship necessary for the new regime.

So while marja’ exist throughout the Shiite world, only Najaf and Qom—now symbolized by Iran’s supreme leader Ali Khamenei—compete for community leadership. Some have interpreted the pope’s visit to Sistani as an implicit backing of the Najaf hawza. While possible, it is more likely Francis’ main concern was simply to honor his local religious equal, and to secure cooperation in defense of Iraqi Christians.

Do they need it from the Shiites? ISIS, the main persecutor of Christians, was a fanatical Sunni movement.

Throughout Middle East history, minority Christians and Shiites have often developed empathy as fellow victims of majority Sunni persecution. But it was Sistani’s fatwa in 2014 that legitimized the development of Shiite militias in defense against the ISIS threat. Today, some of these militias have encroached upon Christian territory, impeding the return home of displaced Christians.

Sistani’s fatwa during Francis’ visit will resonate broadly with the Shiite majority in Iraq. It is a high-profile endorsement that Christians share the nation, with equal rights and responsibilities. All who follow Sistani as marja’ must act accordingly.

Several militias within Iraq, however, are backed by Iran. Whether they follow Qom in religion, or Tehran in politics, these may well ignore Sistani. As a product of Najaf, Iraq’s grand ayatollah neither claims nor possesses political authority to enforce his ruling.

Yet the Chaldean Catholic patriarch in Iraq was satisfied.

It was “a turning point in Christian-Muslim relations,” said Cardinal Louis Sako of Sistani’s fatwa.

And while the visit did not result in a grand declaration like with al-Azhar’s Tayyeb, Francis made sure to lay his Christian intention before Sistani and the Shiites.

The pope “thanked the grand ayatollah for speaking up … in defense of those most vulnerable and persecuted,” stated the Vatican.

“He continues to pray that God, the Creator of all, will grant a future of peace and fraternity, for the beloved land of Iraq.”

Wajih Kanso, a Shiite professor of philosophy at the Lebanese University, and Salah Ali, a Sunni consultant at the Ministry of Religious Affairs in Iraqi Kurdistan, were consulted for this article.

Correction: The Najaf shrine cited belongs to Ali. Hussein’s shrine is in Karbala, not Najaf.