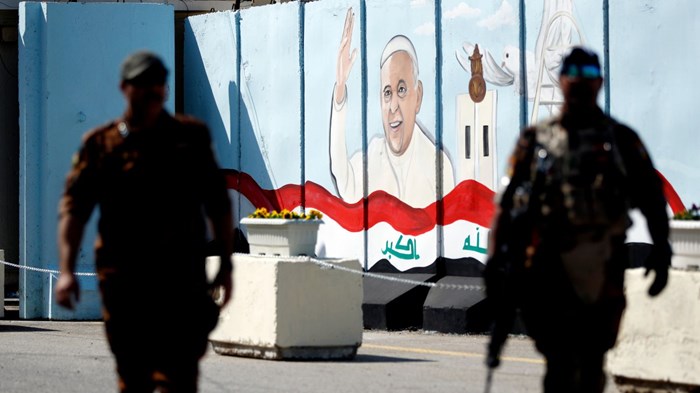 Pope Francis traveled to war-torn Iraq today “as a pilgrim of peace, seeking fraternity [and] reconciliation.”

The trip’s official logo, written in three languages, comes from Matthew 23: “You are all brothers.” Iraq’s evangelicals, therefore, have asked for the pope’s help.

“The other churches don’t want us, and accuse us of everything,” said Maher Dawoud, head of the General Society for Iraqi National Evangelical Churches (GSINEC).

“But we are churches present throughout the world. Why shouldn’t the government give us our rights?”

Dawoud sent a letter to the Vatican, asking Francis to intercede—on behalf of evangelical Christians—with the Catholic church in Iraq, and ultimately with the government in Baghdad.

The World Evangelical Alliance (WEA) had gone straight to the United Nations, long before.

One year ago, the WEA filed a report with the UN Human Rights Committee, protesting the denial of legal recognition for Iraqi evangelicals. Fourteen other denominations are currently counted within the Christian, Yazidi, and Sabaean-Mandaean Religions Diwan (Bureau).

Now estimated at less than 250,000 people, Christians are a small minority of Iraq’s 40 million population, 97 percent of which is Muslim. Evangelical numbers are even smaller.

The Chaldean Catholic Church represents 80 percent of the nation’s Christians, with 110 churches throughout the country. Syriacs, both Catholic and Orthodox, constitute another 10 percent, with 82 churches. Assyrians, primarily through the Church of the East, have a 5 percent share, and Armenians, 3 percent. (Other estimates count 67 percent for the Chaldeans, and 20 percent for the Assyrians. Their identity and history are disputed.)

Evangelicals have 7 churches, Dawoud said. Representing the Baptist, Pentecostal, Nazarene, Alliance, Assemblies of God, and Armenian Evangelical denominations, the GSINEC has petitioned Baghdad for recognition since 2003.

While their churches are open and able to conduct services, they lack the authority to perform marriages, conduct funerals, and interact with the government. This prevents them from owning property, opening bank accounts, and producing religious literature.

It also keeps Protestants from invitations to official events—like the visit of a pope.

But not all of them.

“I will ask Pope Francis to agree with me in prayer,” said Farouk Hammo, pastor of Baghdad Presbyterian Church, who will join other recognized denominations in a private meeting with the pontiff.

“That more people will come to know Jesus as Lord and Savior.”

The Presbyterian church was issued a decree of legal recognition long ago by the Ottoman Empire, honored by all subsequent Iraqi governments. Gospel work began in the early 1800s, and the church continued even after the expulsion of missionaries in 1969.

Today the denomination has congregations in Baghdad, Kirkuk, and Basra. While emigration closed an additional church in the capital, and ISIS shuttered its church in Mosul, it has intentions to open more soon.

The Presbyterians are not a member of the GSINEC, whose churches were only established after the fall of Saddam Hussein. But Hammo has been asked to intercede for them, Dawoud told CT.

The main rejection comes from the traditional churches of Iraq. The Ministry of Religious Affairs, Dawoud said, defers to them in lieu of taking a decision. The primary accusation is over “stealing sheep.”

Evangelicals simply say their churches are open to anyone.

A spokesman for the Chaldean Catholic church told CT he did not have knowledge of this dispute, which could be followed up with after the pope’s visit.

Hammo told CT he is willing to bring the other evangelical churches under his administrative umbrella.

But Dawoud, who served 12 years as secretary on the Presbyterian council, does not find this acceptable. Now pastor of the New Testament Baptist Church of Baghdad, he insists on independence.

But Hammo told CT he has never been asked his opinion on the evangelicals, by either the government or the traditional church leaders. He prefers to stay out of it.

“I have no objection to their registration,” he said. “But if they are serving God, why do they need permission from others?

“This is their own headache.”

It is less of a headache in Iraq’s Kurdistan Regional Government (KRG).

Evangelical churches are recognized legally, said Ghassan Yalda, pastor of the Assemblies of God church in Erbil. He represents the evangelical churches before the regional government, and signs marriage papers with his official stamp.

But he was not invited to meet the pope.

In Baghdad, Hammo participates in the Council of Christian Church Leaders. But in Kurdistan, Yalda is shunned. In 2018, seven traditional church leaders wrote a letter to the regional government with the usual accusations, and requested the names of those involved with the evangelicals.

The Kurdish authorities let the complaint pass. Still, except from occasional communication from Christian members of parliament, he is frozen out of official communication with the government.

“The KRG wants to show Europe and the US it deals with everyone in freedom,” he said. “But I ask them: Why are you shy with us?”

The law in Kurdistan permits each citizen to follow his faith of choice. Yalda’s church numbers about 250 members of Christian background—but includes an additional 50 converts from Kurdish and Arab communities.

Following Baghdad’s lead, however, the KRG does not permit them to change their religious ID cards. Yet depending on their family and tribal situation, some are able to publicly identify with Christ.

And some of these are gaining respect for the traditional churches.

“The Church of the East and the Chaldeans are not producing new Christians,” said Ashur Eskrya, president of Assyrian Aid Society–Iraq.

“But some converts are starting to ask: How did you live like this for centuries?”

A member of the Church of the East, Eskyra hopes the visit of Pope Francis will serve to better unite all of Iraq’s Christians. For 1,500 years, Iraq’s Catholics and Orthodox were divided over the translation of ancient creeds. Today the situation is better, and in the two largest churches, priests can conduct mass in the others’ congregations.

But in modern history, Protestants emerged from their flocks. So despite the differences that still exist between their sects, the traditional churches seek to keep guardianship over the Christian population.

“The government should not defer to them,” Eskrya said. “And the Catholics should realize: The Vatican divided our church in the 16th century.”

March 20, 1552 is cited as the day the Chaldean Catholic Church separated from the Church of the East.

But today there is a constitution, and Nadine Maenza of the US Commission on International Religious Freedom said Iraq should follow it.

“Evangelicals should be registered, as should Jehovah’s Witnesses and Baha’is,” she said. “Iraq’s religious freedom conditions remain poor.” She notes, however, that people are excited about Francis’ visit.

Evangelicals, perhaps, are cautiously optimistic. “Iraq was on the map in black and white. This visit will give it color,” said Hammo, alluding to the flag of ISIS. “Iraq is not a place of hate, but of heritage.”

But pressed further, he said there is only so much the pope can do.

“It means a lot for the pope to come, and not just for Christians,” Hammo continued. “This visit will improve things for the whole nation—but ask the president about that.”

Ara Badalian, pastor of National Evangelical Baptist Church in Baghdad, is fearful everything will end as soon as Francis leaves.

“But I hope for much more,” he wrote in the Ezidi newspaper. “I aspire for it to become a catalyst for peacemaking, and acceptance of the religious other.”

Yalda noted the jokes being told about papal preparations: “‘Can the pope come every couple months? They are only fixing the areas he is scheduled to visit.’”

Many people will be encouraged by the visit, he added, but it will take jobs and education to convince beleaguered Christians to stay in Iraq.

And while Francis is billing the visit as a pilgrimage of peace between Christians and Muslims, this does not resonate with many Iraqi evangelicals.

“What does this peace mean for us?” said Yalda. “We should have peace between the Christians first.”

Shortly after receiving the GSINEC letter, the Vatican wrote back with a note. The pope is very busy, it said. He will read your letter in one month.

“This trip is historic, and good,” Dawoud said. “It raises the morale. But we will see if there are any results.”