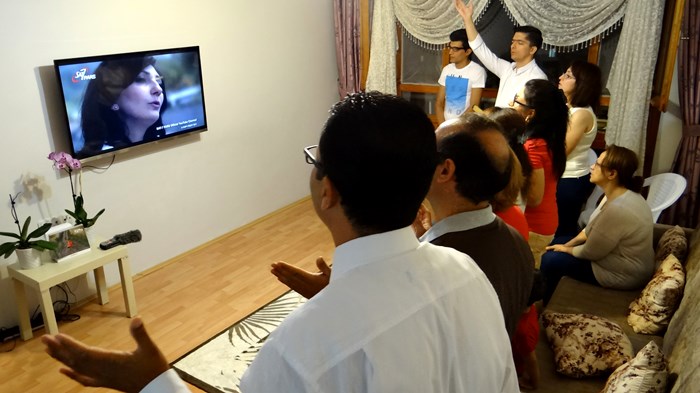 Growing up in civil war–era Lebanon, Rita El-Mounayer’s family often had to hook up the television to a car battery.

“Television was our only refuge during the war, and was a communal activity,” said the international CEO of SAT-7. “This is what we will miss with [video on demand], but we have to be where the technology leads.”

SAT-7 is a pioneer in the field. Beaming Christian satellite TV programming into the Arab world since 1996, it now hosts channels specializing also in Turkish and Farsi.

In 2007, it launched a dedicated kids channel. Ten years later, a separate academy brand was created to provide schooling to Syrian refugees and later to assist with at-home COVID-19 education.

Each is now available at SAT-7 PLUS, through web and mobile apps accessible via Android or iOS. Approximately 20 percent of the broadcaster’s 25 years of content can be streamed, along with all current live programming.

“In Morocco, it used to be that viewers had to wait for days until the Christian teaching program was scheduled,” El-Mounayer said.

“Now, they can binge watch.”

While the advantages for the ministry are obvious, the drawback lies in contributing to a culture of isolation. But Arab youth today are comfortable alone, El-Mounayer said, and Christians must find ways to reach them.

The media giants certainly are.

The Middle East was relatively slow in adopting on-demand video. In 2014, a mere 1 percent of households subscribed to a streaming service. Showtime’s local affiliate launched the service in 2008, and Netflix established a regional presence in 2016. Amazon, Apple, and Starz are also available.

By 2019, an estimated 30 percent of households were streaming online. By 2025, they are expected to outpace cable subscriptions.

And youth are especially addicted. SAT-7 research finds that 66 percent watch content primarily on smart devices. And gaming is especially popular for all ages, with Egypt on top at 68 percent.

But only 14 percent in the Nile River nation play on a traditional console.

These numbers are reflected in Christian media also, boosted by COVID-19.

SAT-7 reported a 16 percent rise in audience engagements in 2020, and a 70 percent rise for its children’s channel. With 50 million views on Facebook and 45 million on YouTube, it was a banner year for the once-satellite-only ministry.

More engagements lead to more opportunities to share the gospel.

Miracle Connect reported a 375 percent increase in audience connections, resulting in 5,000 presentations of the Good News. Heart4Iran, meanwhile, reported a 10fold increase in decisions for Christ in 2020. And 90 percent of its 12,000 decisions in the first four months of COVID-19 lockdown originated through the internet, reflecting the increasing millennial trends in the region.

Half of the population in the Middle East and North Africa is under 24 years old, according to UNICEF.

And for these, the largest increase was practical. SAT-7 reported a 335 percent increase through its academy channel, with hundreds of daily engagements.

It was a lifeline for many.

Even prior to the pandemic, 15 million children were out of school due to armed conflicts in Syria, Iraq, and Yemen. And the Beirut port explosion last year damaged or destroyed 120 schools, resulting in another 55,000 children deprived of education.

“The first thing 19th-century Christian missionaries did when they went to a new country was to open schools and build hospitals,” said George Makeen, SAT-7’s programming director.

“With modern technology, social media, and the power of satellite television, [we] have the ability to reach beyond previous boundaries, and help millions of children.”

And now, streaming services are the latest tool in the toolbox to reach their audience, said Febe Armanios, professor of history at Middlebury College. From handwritten letters to dedicated call centers to texting apps, on-demand video is the next step in creating intimate connections with viewers.

“In a crowded mediascape, Christian satellite ministries are continually distinguishing themselves and their brand from one another,” said Armanios, author of the forthcoming book Satellite Ministries: The Rise of Christian Television in the Middle East.

“But I don’t expect it to fully displace satellite TV any time soon.”

“This is a means of communication for those who can,” said Antoine Karam, SAT-7’s information technology and broadcast director, speaking directly to the question of security. “Our audience is vulnerable, but the newest generations are already aware of the risks.”

Many in restricted societies are already competent in VPN technology, he said. But to protect them further from snooping governments or malevolent hackers, SAT-7 has minimized data collection from online users. Anyone can watch content without registration, and full platform access requires only one’s first name, email, and age range.

SSL certification is built into the system, with opt-in multiple-factor authentication and geoblocking.

But while individual users—especially those of a Muslim background—must always weigh carefully their privacy concerns, El-Mounayer does not expect any pushback in the region. SAT-7’s board of directors has members representing the respected traditional churches of the Middle East, and maintains a strict policy to never criticize another faith.

In a region torn by sectarian division, it is a welcomed stance.

But recalling her youth, El-Mounayer finds the challenges today to be different. So while SAT-7 PLUS may accommodate the spirit of isolated binge watching, it will not surrender to the oft-resulting escapism.

The risk is acknowledged but considered to be minor. SAT-7 will monitor user patterns as closely as possible but doesn’t play the commercial game of cliff hangers at the end of every episode. Instead, the ministry focuses on discipleship.

Past episodes are chosen not only according to their HD quality, but also their educational value. SAT-7’s music, teaching, and dramas have always aimed to build up the church.

Now, they also address the need of the region.

“The biggest problem in the Middle East is not war or poverty, but hopelessness,” El-Mounayer said.

“So with every program we make, we convey a message of hope—spoken by fellow Middle Eastern people, who have put their faith in Jesus Christ.”