Hundreds of churches bless the world’s largest democracy as India celebrates 75 years of independence amid its many growing pains.
Surinder Kaur|August 16, 2022 03:15 PM 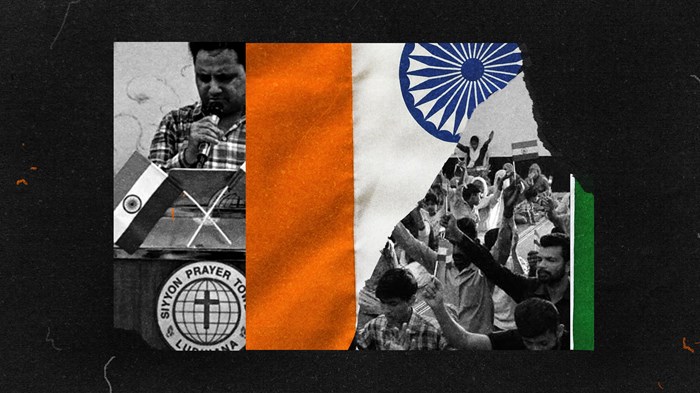 After 75 years of independence, Christians in India are proud to be part of the world’s largest democracy. But they also know it could use lots of prayer.

So on Sunday, hundreds of Protestant and Orthodox churches dedicated 30 minutes of their worship services to 40 prayer points, seeking God’s blessing for their nation as well as peace and prosperity in Indian society.

The Evangelical Fellowship of India (EFI) launched the National Day of Prayer (NDOP) six years ago, joined by the National Council of Churches in India (NCCI) two years later. The event is observed on the Sunday closest to India’s Independence Day, thus this year it fell the day before the August 15 holiday.

Denominational leaders told CT this year’s NDOP was different and significant, taking place during the Indian government’s 75-week initiative called Azadi Ka Amrit Mahotsav (Elixir of Freedom) “to celebrate and commemorate 75 years of independence and the glorious history of its people, culture, and achievements” from March 12, 2021, to August 15, 2023.

“God loves the nation of India and is at work in it,” stated EFI and NCCI in their joint call to prayer. “The Church has been called to pray and work for the peace, prosperity, and stability of the nation. The state of our nation and the challenges it faces stirs us to look to the face of the Almighty God and to pray for His unceasing blessings on India.” 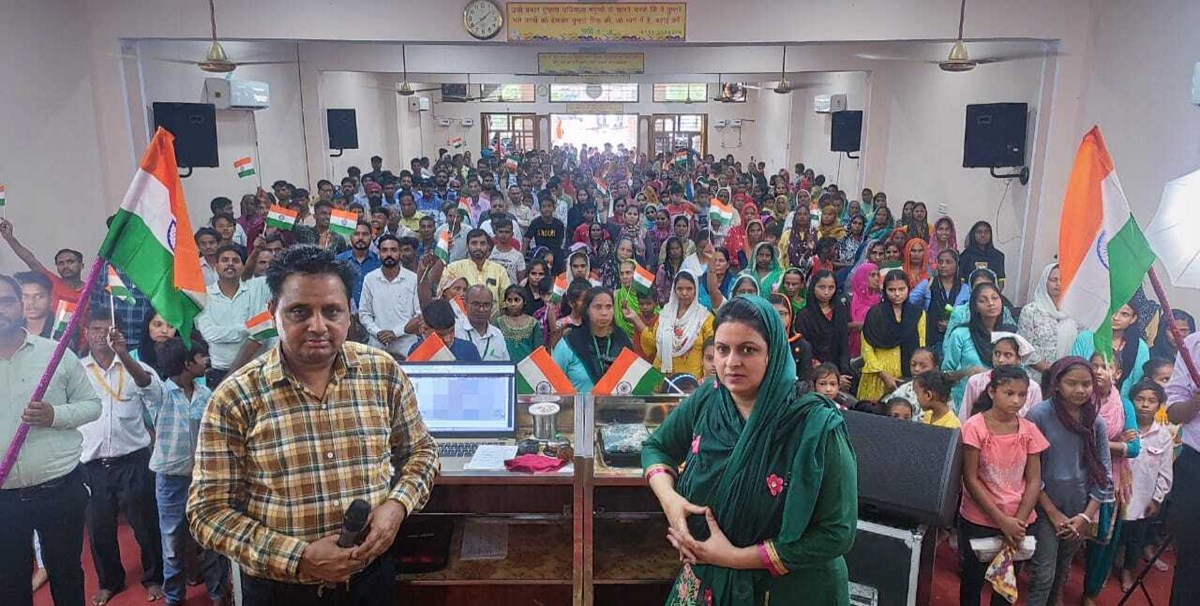 Siyyon Prayer Tower in Ludhiana participates in the 2022 India National Day of Prayer.

The two umbrella bodies appealed to Indian Christians to “earnestly intercede for our country, our leaders, and our fellow citizens.”

Churches in India “pray for the nation and its needs every Sunday and in our various weekday prayer meetings,” said EFI general secretary Vijayesh Lal. But in 2017, a special day of united intercession was identified and endorsed as a need.

A section focused on Indian churches requests that they “boldly proclaim and stand for the truth,” making Jesus known and imitating his humility and compassion, as well as “engage with God’s Word” and “speak out for the poor, marginalized, and discriminated and continue to serve them.”

A section focused on “the persecuted” requests that every Indian would be able to freely practice and propagate their choice of religion. “Pray for the suffering servants of God to be encouraged, emboldened, and courageous,” reads one point. “Pray that nothing would dampen their spirit to serve their Almighty God with undivided heart.” 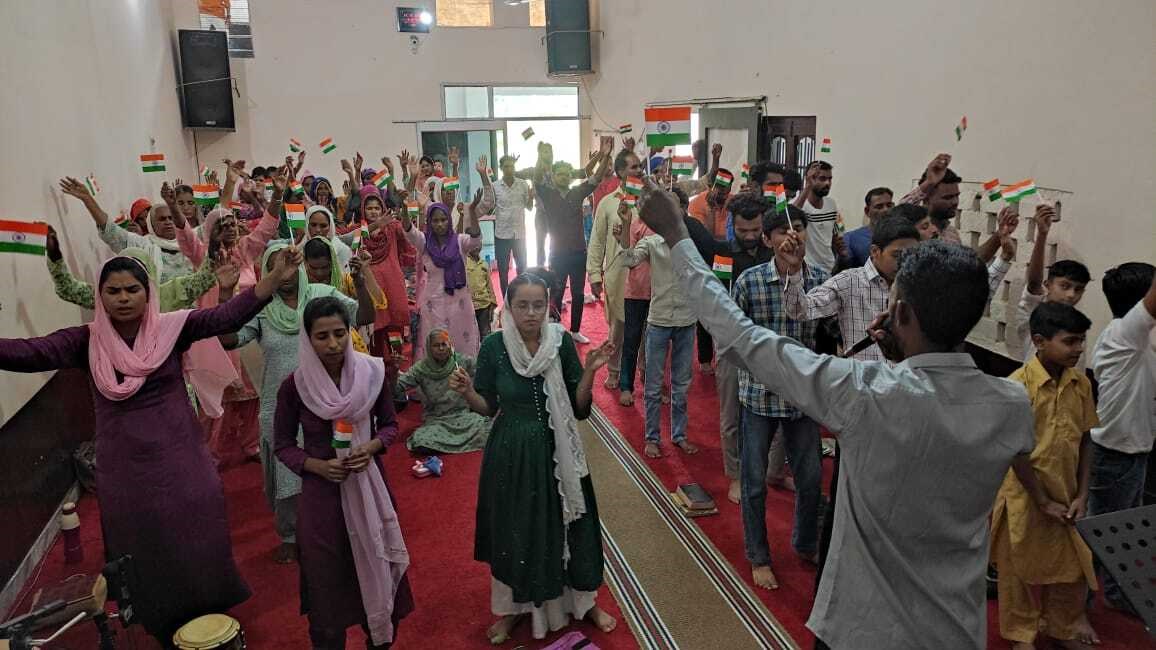 Bhatinda Church in Punjab participates in the 2022 India National Day of Prayer.

Tens of hundreds of congregations gathered to pray for their nation in their respective churches across India.

“It was a beautiful ecumenical gathering,” said T. P. Mordecai, joint secretary of Assam Christian Forum, highlighting the first such observance in Guwahati, the largest city in Northeast India. Participants included the Indian affiliate of Cru, Arunachal Christian Fellowship, and various evangelical and Catholic churches that “came together to intercede for the nation,” he said.

Isaac Dutta, EFI’s secretary for Northwest India, said more than 200 churches in his home state of Punjab set aside 30 minutes from their regular Sunday services for dedicated prayer for the nation. He said a “big difference” this year was the presence of India’s saffron, white, and green flag—colloquially know as the Tricolor—in most sanctuaries, given that Modi had called for a Har Ghar Tiranga (Tricolor in every home) Movement from Aug. 13–15 in order to “deepen our connect with the national flag.”

In Chennai on India’s southeast coast, the Evangelical Church of India’s three seminaries and 10 Bible schools all hoisted the Indian flag on their campuses. “We prayed for … all in authority, that God would give them wisdom to rule righteously,” said Bishop David Onesimu, principal of Madras Theological Seminary and College.

In the state of Kerala on India’s southwest coast, Bishop Thomas Abraham of the St. Thomas Evangelical Church of India said his Reformed Orthodox church has observed the NDOP every year. “But this year was a special year, as it was a jubilee year,” he said. They prayed for authorities using 1 Timothy 2:1–2 as a model: “I urge, then, first of all, that petitions, prayers, intercession and thanksgiving be made for all people—for kings and all those in authority, that we may live peaceful and quiet lives in all godliness and holiness.”

In Lucknow in North India, Bishop Rolly Singh said his evangelical church members pray for their nation every day. On NDOP they gathered scores of youth. “Sessions were held explaining various articles of the freedom of religion under the Indian Constitution,” he said, “and then prayers were offered for peace, tranquility, and unity for authorities and the body of Christ in the country.”

When asked why Indian Christians pray for those who persecute them, Abraham said, “We are to do this for the Lord’s sake.” He emphasized that “prayer has power and can change situations.”

“It is God’s desire that none should perish,” said Ebenezer. “Thus [our persecutors] also need to hear the Good News and rule the people with justice.”

Siyyon Prayer Tower in Ludhiana participates in the 2022 India National Day of Prayer.

EFI and NCCI released statements listing both the achievements of India as a nation and its remaining challenges.

“We should be proud of being the world’s largest democracy,” stated EFI of the 75th anniversary. “We are a nation of 1.3 billion people, a young and aspirational nation with great potential, and obstacles as great to overcome.”

While the Indian government claims the celebration as a “festival of awakening of the nation; festival of fulfilling the dream of good governance; and the festival of global peace and development,” Indian denominational leaders have their apprehensions.

“This year is significant … in terms of how things have been happening now,” said NCCI general secretary Asir Ebenezer. “The nation is moving to a totalitarian state where the ‘Pharaoh’ says [something] and everybody follows. So that is something very dangerous and divisive.”

He worries that while the central government persuades the masses with the tricolor flag today, tomorrow it “might ask us to do something else and if one does not do it, one would be deemed as anti-national.”

Onesimu highlighted the present-day challenges that Indian minorities face, especially Christians and Muslims, and appealed to the government “to focus on the persecution of the minorities and take adequate action against the perpetrators.”

Abraham noted the many “disparities, inequalities, and discrimination challenging our country” and said Indian Christians “must try to address that and pray for peace, unity, and equality to be maintained.”

“The one gnawing issue that soils the otherwise brilliant record of 76 years has been the recurring political use of religion,” stated EFI. “This has been the main cause of pain and suffering in many parts of the country over the last several decades.”

Red Flags must be raised this Independence Day on the basic glue that holds the nation together—of religious coexistence, mutual respect, and equality before the law. Religious polarization and the growth of high-pitched religious nationalism and majoritarianism, fueled by an equally toxic social media and television media, is a major challenge before the nation. The world has known India as the largest liberal democracy with constitutional values of secularism, liberty, plurality, fraternity, and tolerance. Today, that image is under stress and the result could be the weakening of the soft power of India. This should worry all citizens of the country.

Challenges such as poverty, pollution, inequality, and children at risk affect all faith groups and all Indians must work together to address them, said Lal. However, such collaboration is prevented by religious and political polarization, majoritarianism, and religious nationalism.

“These must be checked, and more concentration needs to be focused on what unites us as Indians as opposed to what divides us,” he said. “I am sure that when we as a people work together for the issues that confront us all—regardless of our caste, creed, or religion—we can rise as a nation and overcome.”