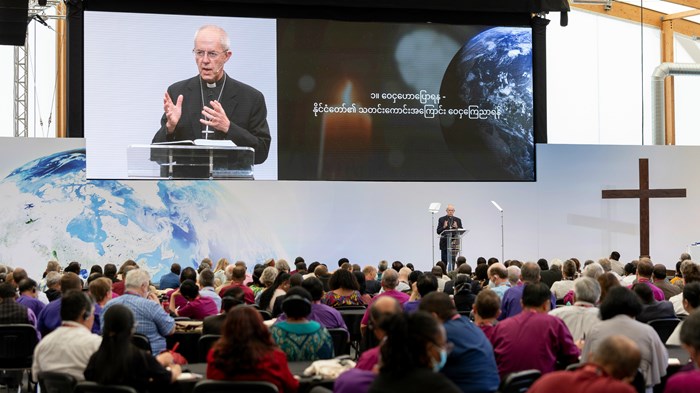 At least 125 Anglican bishops gathered at the Lambeth conference in Canterbury, England, endorsed a decades-old resolution against “homosexual practice” along with a new provision that “renewed steps be taken to ensure all provinces abide by this doctrine in their faith, order, and practice.”

The conservative Global South Fellowship of Anglican Churches (GSFA) launched an effort last week to have Resolution 1.10, adopted at Lambeth 1998, reaffirmed as the official stance of the Anglican Communion after 2022 conference leaders scrapped an initial plan to affirm the resolution among an array of “calls” or statements on pressing issues.

With about 85 million adherents, the Anglican Communion is the third-largest body of Christians worldwide and exists in 165 countries. Some 650 bishops attended Lambeth, which concluded August 8 and was last held in 2008, meaning the GSFA campaign garnered votes from about one-fifth of clergy present.

“I give thanks to God for all the bishops who have reaffirmed Lambeth 1.10–in its entirety–as the official teaching of the Anglican Communion on Marriage and Sexuality,” said Archbishop Justin Badi, primate of South Sudan and GSFA chair. “We have been greatly encouraged by the bishops worldwide at this conference who have expressed their support, in whatever form, for the Communion to be governed by biblical authority.”

Badi has emerged as a leading voice for conservatives and has not minced words in his criticism of liberal theology. To demonstrate their resolve, he and other conservative bishops at Lambeth refused to receive communion at services in the historic 1,400-year-old Canterbury cathedral, where Augustine served as a missionary in the sixth century.

“We cannot break bread with bishops who betray the Bible,” he said in an interview with Church Times, a UK newspaper focused on Anglican affairs. “We cannot just deceive ourselves, saying: ‘Fine, we are together.’ We are not really together. This is hypocrisy.”

GSFA will continue to seek the endorsement of 1.10 from bishops who did not attend this month’s conference. Bishops from Nigeria, Rwanda, and Uganda boycotted because several Anglican provinces, including Canada, Wales, Scotland, and the US, allow priests or bishops to perform same-sex marriages or ordain LGBT clergy. LGBT bishops participated in all aspects of Lambeth. 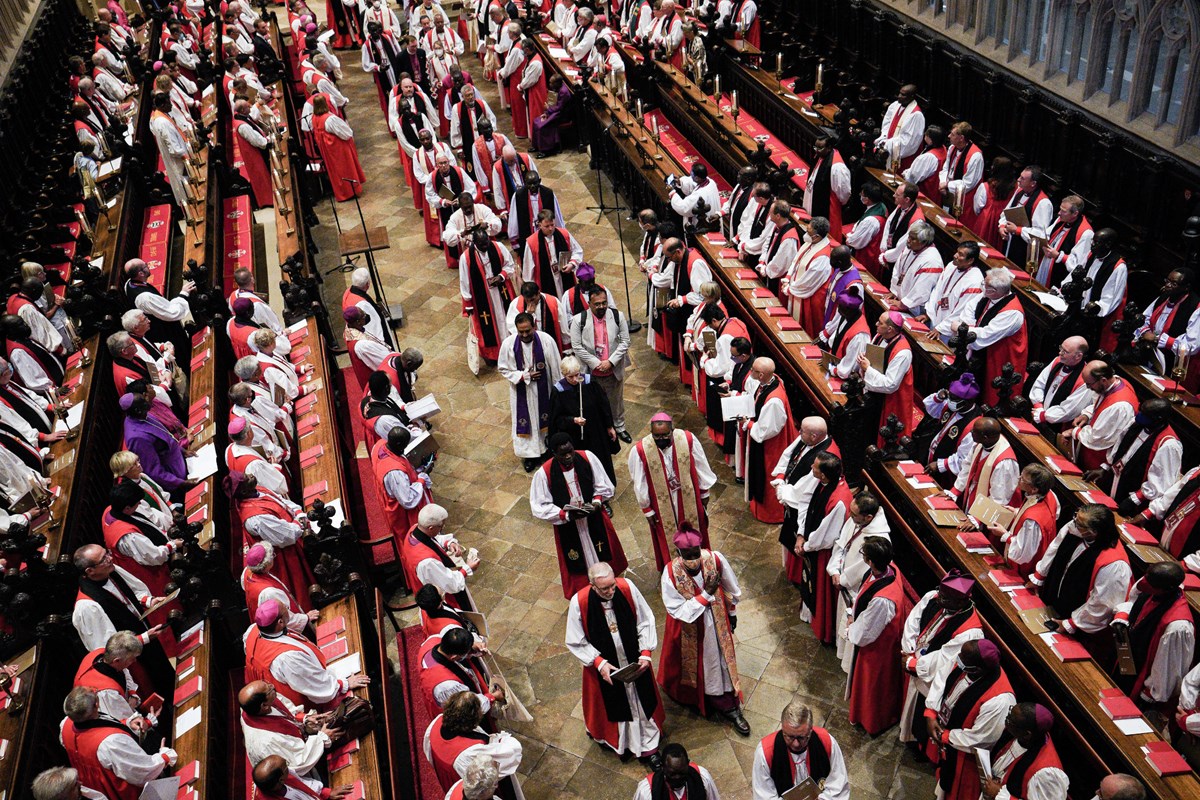 The opening service at Canterbury Cathedral during the 2022 Lambeth Conference in the United Kingdom.

During the conference, Justin Welby, archbishop of Canterbury and the topmost Anglican leader, affirmed biblical teaching that homosexual practice is sinful and that 1.10 remained a valid resolution. But he also told The London Times, “I will not punish churches that conduct gay marriages.” The comments were widely seen as an attempt to mollify his critics on both sides.

For some attendees, the high-wire act successfully “lanced a boil” and enabled clergy to conclude Lambeth agreeing to disagree, reported the Religion Media Centre. Particularly after Welby announced his priority as archbishop of Canterbury was unity. “I neither have, nor do I seek, the authority to discipline or exclude a church of the Anglican Communion,” he said. “I will not do so. I may comment in public on occasions, but that is all."

In his pivotal speech, Welby also asserted that the stance of Western progressives and Global South conservatives was essential to their ministries:

For the large majority of the Anglican Communion the traditional understanding of marriage is something that is understood, accepted and without question, not only by Bishops but their entire Church, and the societies in which they live. For them, to question this teaching is unthinkable, and in many countries would make the church a victim of derision, contempt and even attack. For many churches to change traditional teaching challenges their very existence.

For a minority, we can say almost the same. They have not arrived lightly at their ideas that traditional teaching needs to change. They are not careless about scripture. They do not reject Christ. But they have come to a different view on sexuality after long prayer, deep study and reflection on understandings of human nature. For them, to question this different teaching is unthinkable, and in many countries is making the church a victim of derision, contempt and even attack. For these churches not to change traditional teaching challenges their very existence.

Welby’s reluctance to hold Anglican priests and bishops accountable for ignoring 1.10 has stirred up a hornet’s nest of ongoing criticism from conservative Anglicans. Liberals, meanwhile, criticize the archbishop for being tolerant of homophobia and unjust treatment of the LGBT community within the communion.

Twenty-four years ago, a supermajority of Anglican leaders agreed in resolution 1:10 that “homosexual practice is incompatible with scripture,” intending to ban same-sex marriages and LGBT ordinations. But since then, progressive church leaders have consecrated LGBT priests and bishops and have married same-sex couples in the US and Canada, among several other provinces.

Since assuming office in 2013, Welby’s attempts to mediate the controversy over homosexuality have drawn sharp rebukes and boycotts from conservatives. “To authorize the practice and teaching of same-sex unions as normative and not a violation of divine intentions for humankind,” said Badi, “is to undermine the clarity and authority of holy scripture, which is the bedrock of our common life as a communion.”

GSFA describes itself as a “holy remnant” within the Anglican Communion. Its leaders participated in Lambeth 2022, while leaders of the conservative GAFCON movement boycotted.

A few liberals have spoken with more moderate rhetoric toward conservatives. “We in the Anglican Communion live with a plurality of views on marriage,” stated Michael Curry, presiding bishop of The Episcopal Church in the US. “… [T]here is another view equally to be respected: a view that includes and embraces same-sex couples who seek the blessing of God on their loving relationships, their commitments, and their families.” 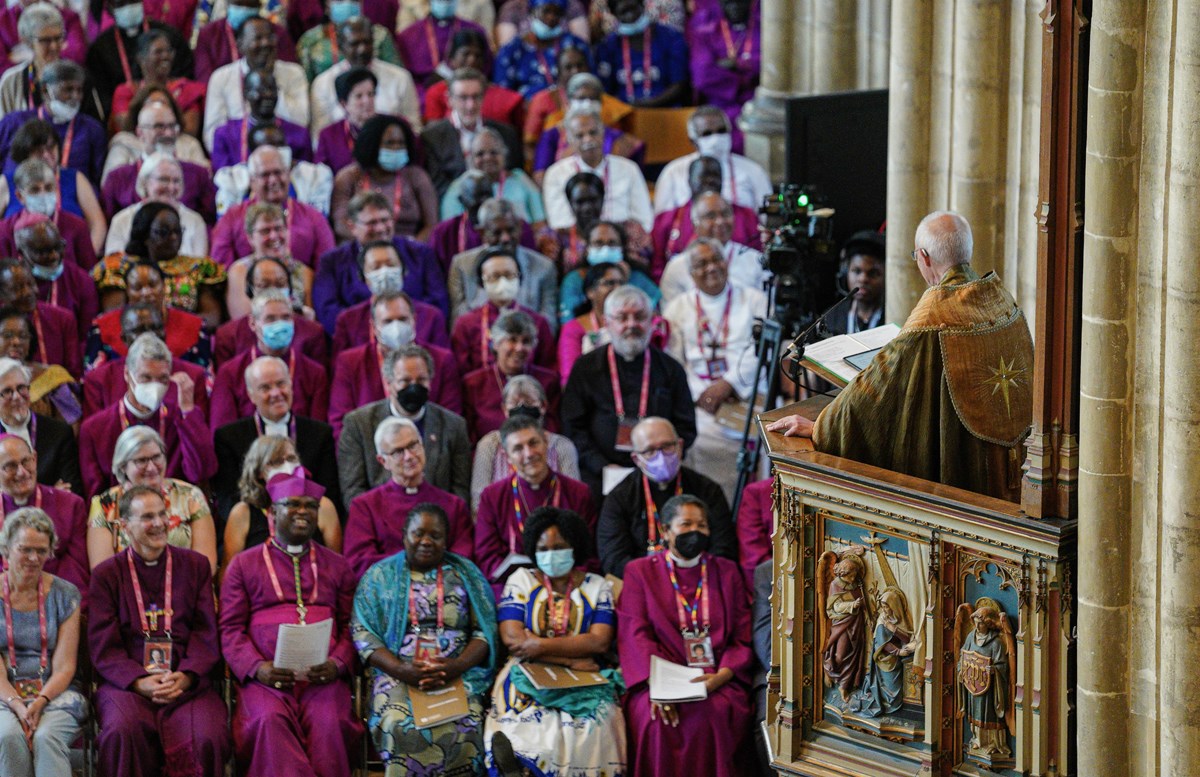 Archbishop of Canterbury Justin Welby gives the closing sermon of the 2022 Lambeth Conference in Canterbury Cathedral in the United Kingdom.

These disagreements over LGBT rights occur amid the demographic decline of Anglican/Episcopal churches in North America and the UK and the rapid rise of traditional churches in the so-called Global South. “There are more Anglicans in church on Sunday morning in Nigeria than in all the British Isles and North America combined,” according to Gerald McDermott, a scholar and author of The Future of Orthodox Anglicanism.

In the UK, the discordance between church and state complicates the Anglican Communion’s stance toward same-sex unions. The British Parliament approved same-sex civil marriages in 2013, and Queen Elizabeth II, the titular head of the Church of England, gave her “royal assent” to the new law.

Yet the Church of England has a policy to not allow priests to conduct such marriage services but supports celibate same-sex couples in civil legal partnerships. Changing Attitude England, a leading LGBT advocacy group, views opposition to same-sex marriage as homophobia.

The clash among Anglicans is unfolding as more nations have legalized same-sex marriages. As of 2022, 32 nations allow them worldwide. But Africa with its population of 1.2 billion, is the one region where homosexuality is often criminalized and same-sex marriage banned. South Africa is the only one of 54 African nations to legally recognize same-sex marriages.

Years ago, at the 1998 Lambeth, African bishops emerged as a key part of the conservative drive to maintain orthodox Anglicanism. Largely due to the growing number of African bishops in attendance, and with the support of then Archbishop of Canterbury George Carey, Anglican leaders voted 526–70 (with 45 abstentions) for resolution 1.10, a supermajority of 82 percent. The resolution text counseled that “pastoral care” be the church’s core means of spiritual care for same-sex couples. There was no provision for punishment of clergy for marrying a same-sex couple.

The Global Anglican Futures group (GAFCON) is event-based and first met in Jerusalem in 2008 with 1,100 delegates from 29 countries. Ten years later, GAFCON convened 1,900 delegates from 53 countries. GSFA has its roots in high-level meetings that began in 1994 and currently has 24 member churches, including the breakaway Anglican Church in North America.

Conservative Anglicans will face another test of their resolve when they meet up in Kigali, Rwanda, in 2023 for the fourth GAFCON gathering. Many believe the future means to “decolonialize” the faith, moving Anglicanism away from its historic center at Canterbury and heterodox Western leaders. Or as Canon Chris Sugden, a leader at the Oxford Centre for Religion in Public Life, summarized their argument: “Africa is now the actual heart of Anglicanism.”

Badi pledged that his Global South colleagues would remain and pursue “repair of the tear” in the communion. “Let those with revisionist theology go or repent,” he told a press conference. “The West had the gospel and took it to us in Africa. We may have to bring it back.”