Over half say they believe their congregation is politically unified already.
Aaron Earls - Lifeway Research|November 1, 2022 01:37 PM 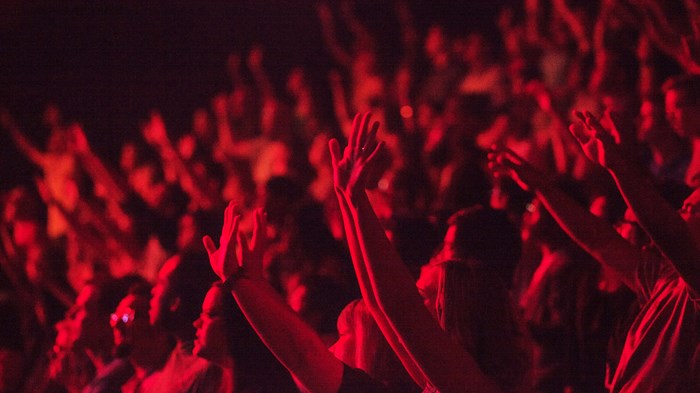 As churchgoers head to the ballot box for midterm elections, most expect the rest of their congregation to be voting the same way they do.

Half of US Protestant churchgoers say they’d prefer to attend a church where people share their political views, and 55 percent believe that to be the case at their congregation already, according to a study from Lifeway Research.

“Studies have shown that voting patterns and political affiliation correlate with the type of church and amount of church involvement someone has,” said Scott McConnell, executive director of Lifeway Research. “But when asked if churchgoers want political similarity to flow back into their church relationships, this is desirable for only half of churchgoers.” 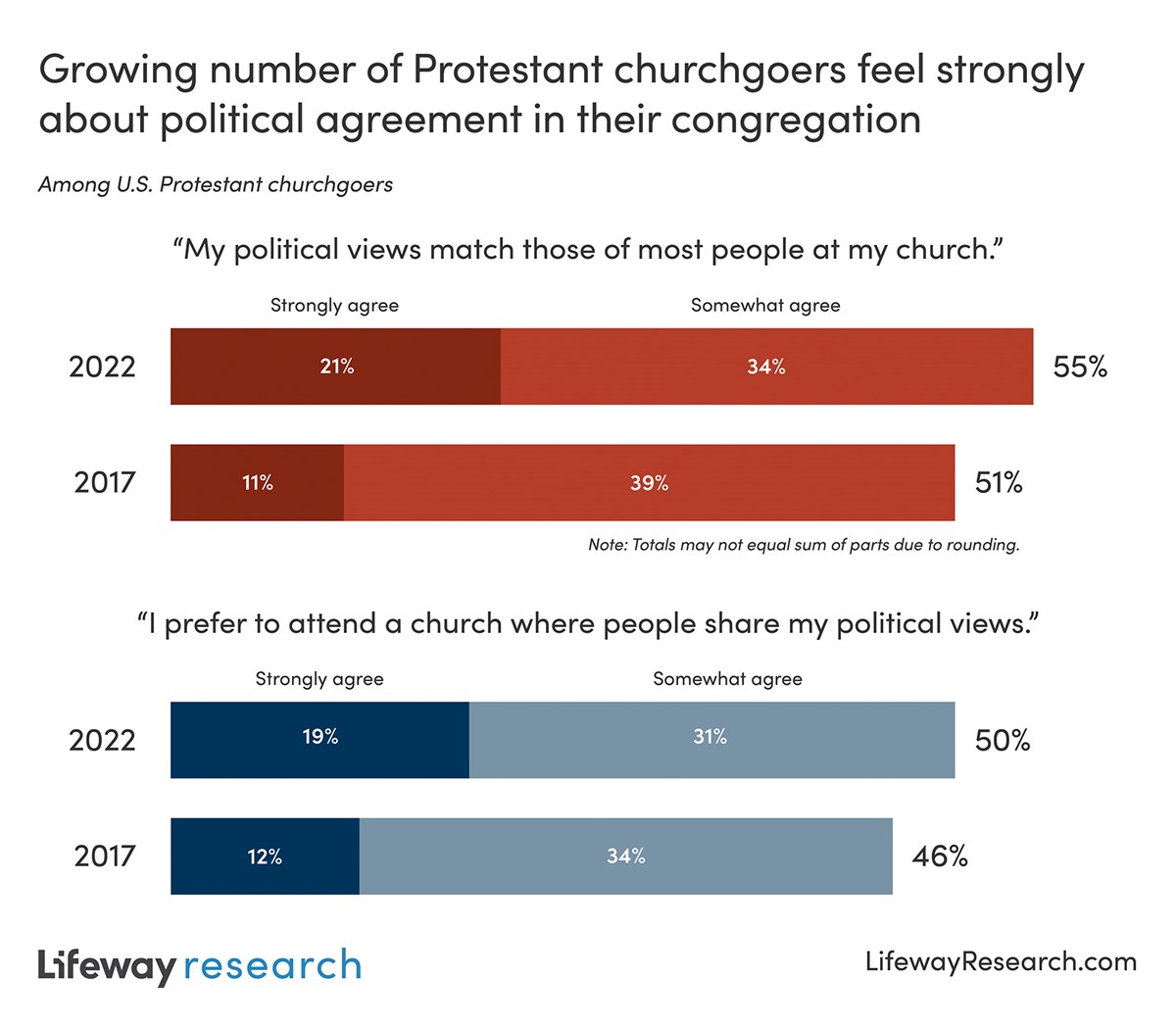 “While almost 1 in 5 churchgoers is adamant that they want to attend church with those who share their political views, there are just as many who strongly disagree with that perspective,” said McConnell. “The 23 percent who strongly disagree are clearly saying the source of unity they have with others in their church has nothing to do with partisanship.”

Younger churchgoers are more likely than older ones to prefer sharing a pew with someone of the same politics. Almost 3 in 5 of those under 50 (57%) want a congregation with people who share their political views, compared to 47 percent of those 50 to 65 and 41 percent of those 65 and older.

Ethnicity and education also play a role. White (54%) and African American (53%) churchgoers are more likely to want a church with shared politics than Hispanic churchgoers (25%). Those who are high school graduates or less (44%) are among the least likely.

Denominationally, Methodist (88%) and Restorationist movement (80%) churchgoers are more likely to say they want their congregations to have a common political perspective than Baptists (47%), Presbyterian/Reformed (47%), Lutherans (38%) and those who attend a non-denominational church (38%).

Churchgoers with evangelical beliefs (44%) are less likely than churchgoers who don’t strongly agree with the four core evangelical theology statements (54%) to say they prefer a church where people share their political opinions.

Despite their preferences, churchgoers may stick around even if the rest of the congregation doesn’t share their views. Another 2017 Lifeway Research study found only 9 percent of Protestant churchgoers said they would consider changing churches over political views.

Regardless of their preferences, most churchgoers believe they’re among their political tribe when at church. More than half (55%) of US Protestant churchgoers say their political views match those of most people at their church. Fewer than a quarter disagree (23%) or aren’t sure (22%).

Additionally, fewer churchgoers are seemingly unsure about the political opinions of their fellow congregation members. In 2017, 30 percent said they weren’t sure if their political views matched those of most others at the church. That dropped to 22 percent in 2022.

“If one looks at the culture today, you might assume that most churches have been arguing over politics as well. While it appears more churchgoers notice the political views of other attendees, only 28 percent of pastors agree (14 percent strongly) that their church has experienced significant conflict in the last year,” said McConnell. “Those who want political continuity may simply want a respite from political strife at church, and others may want to move together in political action.” 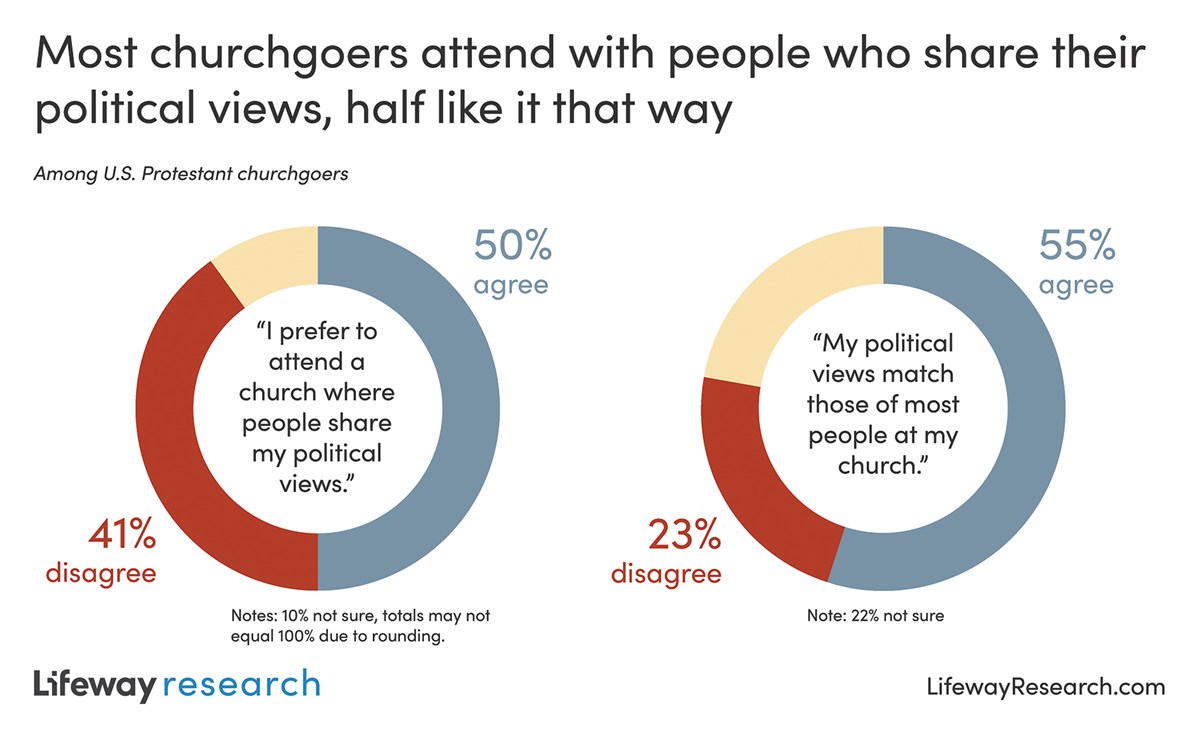 For many groups, their perception of their church matches their preferences. Older churchgoers, those 65 and older, are the least likely to think most people in their church share their politics (46%) and the most likely to say they aren’t sure (32%). African American (60%) and white (58%) churchgoers are also among the most likely to agree. Denominationally, Methodists (89%) and those a part of a Restorationist movement church (76%) believe most of the fellow churchgoers share their political views.

Churchgoers who don’t qualify as evangelical by belief are just as likely to say they prefer to worship in a church that shared their politics (54%) as they are to believe that is the case (53%). Churchgoers with evangelical beliefs, however, are different. They’re more likely to believe they belong to a congregation that predominantly agrees with them politically (59%) than they are to say that’s what they’d prefer (44%).

Based on an online survey of 1,002 Americans was conducted September 19-29, 2022. For more information, view thecomplete reportand visitLifewayResearch.com.