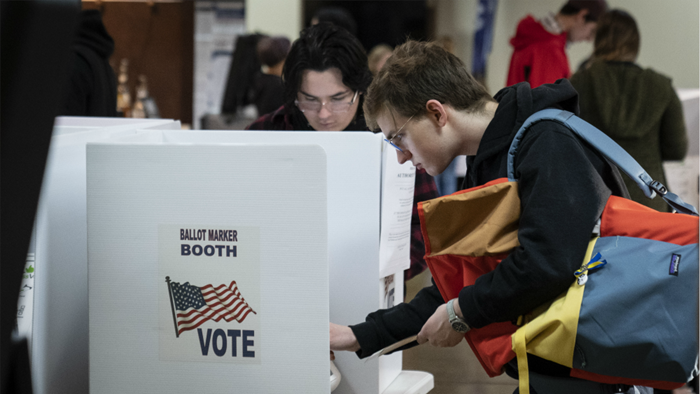 Image: Drew Angerer/Getty Images
A young person votes in the midterm election at a Church of Christ in Indiana.

Lydia Franklin says the leaders of her church don’t talk much about politics. But they do talk about Jesus, his commands to love your neighbors, and the importance of Christians helping others.

So when the 18-year-old went to the polls for the first time this election, those are the values she took with her into the voting booth.

“To be evangelical is to follow Jesus Christ and to do as he teaches in the Bible,” said Franklin, who lives in Oklahoma. “I feel that as Christians, we are called to help people. What better way to help than to vote for people that will get the job done?”

Franklin was part of the estimated 27 percent of Gen Z that voted in the midterm election—a notably higher turnout rate than millennials and Gen Xers when they were between the ages of 18 and 29.

The turnout doesn’t surprise Kevin Singer, president of nonprofit Neighborly Faith (NF). He has been looking at younger evangelicals’ civic engagement and the influences on their politics.

A recent NF study, done jointly with Philanthropy for Active Civic Engagement and Springtide Research Institute, surveyed nearly 2,000 people ages 18 to 25, oversampling those who identified as evangelical (24%) and born-again (54%) and asking questions about their views of Jesus and the Bible. They wanted to see how faith shapes civic engagement for Gen Z. What they found is that Gen Z evangelicals are activists.

More than half say it’s important for them to vote, but about 45 percent say they also get involved in community service and fundraising. They are more likely than their nonevangelical, non-Christian, and nonreligious peers to say they believe in advocating for a cause, engaging with local government, and even protesting.

And Gen Z is also less likely than older cohorts to be partisan.

“It was extremely unlikely that young evangelicals would contribute to a ‘wave’ in either direction [in the midterm election],” Singer said. “Our data shows this group watches CNN and Fox News at the same rates. They listen to both Ben Shapiro and Bernie Sanders.”

Other media figures they listen to for political perspective include Donald Trump and Joe Biden, Elon Musk, Candace Owens, Jimmy Kimmel, and Joe Rogan. The majority of the younger evangelicals say they are not taking their cues from media figures, though. They are more likely to look to their religious leaders.

Nearly 40 percent say their political opinions have been influenced by a religious leader. “Prayer leaders” were ranked most influential in this aspect of their lives (approximately 48%), followed by assistant pastors (43%), pastors (41%), camp leaders (39%), and worship ministers (37%).

Only 16 percent of young evangelicals said leaders in the church don’t impact their politics at all.

The religious influence may be more clearly seen with some issues than others, though. Gen Z evangelicals said they were most influenced on the topics of education, health care, COVID-19, abortion, and economics (in that order). The survey also asked about crime, prison reform, gun violence, climate change, immigration, LGBT issues, and foreign policy but found few felt that religious leaders influenced their views on these topics.

According to Singer, however, younger evangelicals like Franklin are thinking less about specific issues than they are about values. When they go to the polls, they’re looking for ways to coherently connect their faith-formed values with their vote.

“Coherence is really important for young people—to feel like their values are truly represented in what they’re engaging in,” Singer said. “They need to know that there is coherence in how they’re behaving politically in the world.”

They also may not ask about specific issues. Kirby Neely, the students’ senior director and pastor at Woodmen Valley Chapel, a multisite church in Colorado Springs, says the young people he sees don’t talk about politics a lot.

“Our broader cultural backdrop has led many students to wonder whether politics will harm relationships, even in the church,” he said.

They build relationships first and talk about issues with people they can trust. And even then, they’re more likely to focus on broader and deeper values than anything that seems “hot button.”

Franklin relates to this. She cares about issues, but when she thinks about voting, she thinks about her faith and how as a Christian she is called to “love people for who they are and to help people in any way I can.”

She doesn’t claim to speak for her generation, saying she personally believes that if the “right people got out to vote,” the democratic process would be an effective tool for change. She’d like to see it change so that poverty is eradicated or at least significantly decreased. She’d like there to be less inequality and wants to see unhoused people given homes.

“I hope to see more acceptance for others, no matter what they look like or who they are,” she said.

And ultimately, for Franklin, all this is about faith—living out her love for Jesus in a way that others can see.

“Through my actions,” she said, “I can then hopefully lead more people to Christ."