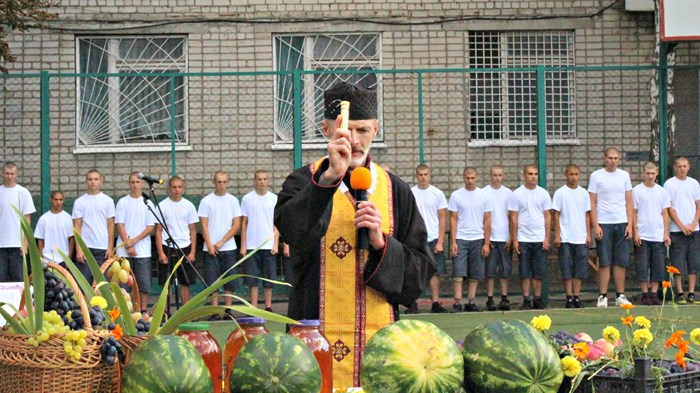 Vyacheslav Kogut was so angry he could spit.

The Russian invasion once again drew him out of his normal ministry as executive director of Prison Fellowship Ukraine (PFU) and into relief work. The military counterattack had just liberated another village on the eastern front, where several civilians had been shot.

The source of his ire, however, was his summons back to prison.

“We have Russian prisoners of war who need clothing,” informed the warden.

“I’ll bring them skirts and dresses,” Kogut shot back, grumbling.

Internally seething at having to leave his injured compatriots, he then remembered his Bible: If your enemy is hungry, feed him—as well as, I needed clothes, and you clothed me.

He went into the storehouse that collected goods for displaced Ukrainians and took the best of its donated items. Security guards at the prison were amazed at the quality. And in addition to the regular food and supplies they offer to Russian POWs in ongoing weekly visits, his team now adds candy and sweets.

“It is a way to show many people, besides these prisoners, that God is love,” said Kogut. “And when they go back to Russia, they can never again return with guns and hatred.”

Affiliated with the international network of the Chuck Colson–founded ministry, PFU began work in Ukraine in 2002. The nation is home to a prison population of 48,000 in 85 still-surviving jails, and Kogut says his team ministers in all of them.

It was not always so. Despite its ecumenical approach from the beginning, PFU’s evangelical orientation worried some prison officials. But consistent ministry to inmates and guards alike won favor, as did the scope of entertainment options presented.

Soccer teams visited from Brazil, Eurovision stars put on performances, and—dearer to the hearts of the prisoners—summer camps were held to care for their children.

And in 2008, PFU began teaching courses on chaplaincy, receiving certificates from the central government to enter any prison in Ukraine. Within two years, Kogut said, the prejudice was overcome.

“Our mission is dependent on unity,” said Constantin Panteley, PFU secretary and a priest in the Ukrainian Greek Catholic Church. “We only bring misunderstanding about Christianity if we are divided.”

Many prisons now have separate chapels for Orthodox, Catholic, or Protestant services. But inmates often are a product of Soviet irreligion and have only nominal attachment to a denomination. Panteley has seen many converted, who then choose their favored service.

“We will win this war because of our unity of differences,” he said, drawing contrast to the persecution meted out to non-Orthodox in occupied areas of Ukraine’s eastern Donbas region. “Unlike Russia, we appreciate freedom.”

For instance, a priest may serve as a substitute if a Pentecostal pastor is not available to minister to an inmate. Even clergy from the Ukrainian Orthodox Church, which did not cut ties with Moscow until May this year, have stepped in when needed. Their cooperation survived the damage from the 2014 Russian-backed separatist movement in Donbas and the annexation of Crimea.

The strife, however, severed 20 percent of Ukraine’s prisons from the central government. But even in the contested region, PFU maintained connections with prisoners. Some hid cell phones to continue counseling. Sympathetic local citizens secretly delivered Bibles.

It all came to a halt with the Russian invasion.

“The war resulted in a severe breakdown of the supply chain for food and medicine into prisons,” said James Ackerman, president of Prison Fellowship USA. “And as you might imagine, prisons and halfway houses are at the bottom of the food chain.”

The US board, Ackerman said, donated $1 million to repair the supply chain.

Through PFU, PF Romania, and local churches, over 2,500 volunteers are delivering essential food and medicine to inmates, while working with authorities to repair remote, dilapidated structures and expand facilities to accommodate prisoners evacuated from elsewhere. At least five facilities have been hit by Russian shelling, though inmates in each had already been transferred to safer areas.

And recently, the US branch of Prison Fellowship approved funding to buy generators. Since Ukraine began its surge on the battlefield, President Volodymyr Zelensky said that Russian drones have destroyed one-third of the nation’s power stations.

At the start of the invasion, all jails were closed to outsiders for security. The minister of justice, responsible for the prison system, said civilian evacuations should be prioritized. Guards were left behind as their families fled.

The fear was palpable, Kogut said. Even the transfer of inmates and officials alike weighed heavily on their souls. Eventually, PFU regained access, and the existing indifference to regular chapel services was replaced by fervency. A mini-revival is underway.

So is an ad hoc reform PFU proposed at the highest levels. The ministry agreed in principle to implement a probation system to sentence those convicted of lesser crimes to a rehabilitation center rather than prison. The invasion sidelined official implementation, but now by necessity these halfway houses are bursting at the seams.

“Some come to us with diseases, broken in body and spirit,” said Mikhail Dren, who oversees a center in Lviv. “But we help restore them and bring them into a relationship with God.”

Some centers are run by the government; others, by churches. Church facilities usually house 10–12 people, although Dren’s can accommodate 100. Pastor of the Pentecostal New Life Church in nearby Boryslav, he said room and board costs $3,000 monthly. And this is in addition to the extra 120 families they care for, internally displaced by the war.

But the results are worth it. Only 5 percent of Ukrainian convicts eligible for rehabilitation can find housing, he said, but 70 percent of those in PFU centers remain in church and contribute to society after their release. Over 20 formerly incarcerated persons, now with wives, children, and jobs, attend New Life.

Responsible for all prison ministry in western Ukraine, Dren’s efforts place him in close communication with the national Ministry of Justice. And as a result, he was tapped to lead the spiritual outreach to Russian POWs. A reported 51 small detention facilities are scattered throughout the country’s regions, along with one large center in an undisclosed area in the west.

It has not been easy.

While Dren was serving as a frontline chaplain in 2015 during the separatist struggle, his good friend was shot in the groin by a Russian sniper. Under fire and unable to evacuate, he watched his friend bleed to death.

More recently, Dren delivered aid to the family of a killed soldier. The soldier’s young boy, distraught from the war and his father’s long absence ran up and clasped Dren around the legs, crying out, “I finally found Dad.”

From there he went to the POW camp.

“First, it is God’s grace; and second, it is impossible,” said Dren. “But we are Christians, and we must share the gospel.”

The Russian prisoners are a captive audience, he said, and listen politely. Initially, they kept quiet, assuming chaplains to be part of Ukraine’s security apparatus. But over time they engaged more, as “huge numbers” of them realized these volunteers were ordinary people who were treating them well.

By contrast, the UN has documented cases of torture, dire health conditions, and denying family communication to Ukrainian POWs in Russia. Ukraine has been criticized for lesser violations of the 1949 Geneva Convention governing treatment of prisoners of war, hosting press conferences with confessing soldiers and posting videos in which soldiers reveal personal details.

Conditions in the prison camp cannot be disclosed for security reasons. But an official visit to one facility, granted to Agence France-Presse, pictured steel-framed bunks with wafer-thin mattresses. A television and outdoor recreation are made available, while prisoners are assigned work to contribute to Ukraine’s well-being.

“Given that we didn’t exactly come here for a [tourist] visit, it’s what you’d expect,” said one. “They feed us, water us, do not offend us.”

PFU kindness gets through to some. Dren said that POWs have broken down in tears and apologized. Others, as he can tell in their eyes, connect with the spiritual lessons. He has yet to meet a POW with evangelical faith, and upon the frequent prisoner swaps, they say goodbye without emotion.

Around 800 Ukrainians have returned home from Russia in roughly 20 prisoner swaps, said an intelligence official. The number of Russians exchanged has not been disclosed.

Dren is confident there is an impact, but the greatest transformation is internal.

“I have no desire to go to them, to give hugs and kisses,” he said. “But agape love, above our understanding, does exist.”

Yet many Ukrainians warn that it should not be demanded of them.

“Only those who have personally seen the war, seen hellfire in the flames, and seen the enemy in the face have the right to admonish,” said Taras Dyatlik, regional director of Overseas Council, United World Mission (Ukraine). “The call to love your enemies comes from the cross, not from a Jerusalem pub or temple.”

Within the last month, at least three evangelicals have died in the war. Andrey Zhuravel, a Presbyterian from Kharkiv, died defending the frontlines. Ernest Skalun, a member of Renewal Church in Mariupol, died in the shelling. And so did Mikhailo Makhnyk, a deacon in the Baptist church in Siversk, killed while delivering humanitarian aid.

Dren pleads for more Western military support. Panteley agrees, though he emphasizes that Ukrainian love of freedom will win the war. And while Kogut also concurs, his sense of victory comes from the highest cause.

“The evil of Russia can only be stopped by force—this is what our soldiers do,” he said. “But it can only be defeated by love.”