Ministries double-down on efforts to build community in the wake of debilitating isolation.
Emily Belz in New York|October 12, 2022 01:00 PM 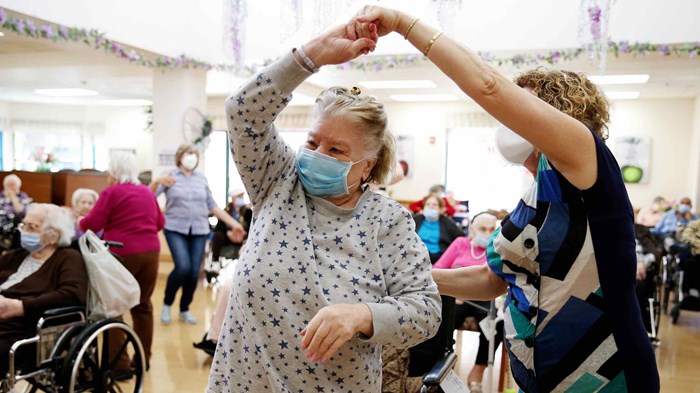 Inside an Upper East Side nursing home on a September Sunday, Mimi Weinstein, who organizes and leads a weekly worship service there, bounced from resident to resident. She handed out bulletins and greeted people by name while shaking a tambourine. Two dozen residents showed up for the service, filling the activity room. Weinstein’s husband, Jerry, sat down at a baby grand piano, the top propped up with a copy of Jonathan Franzen’s Freedom, and started playing worship songs.

When a volunteer announced the first song of the service, one resident shouted at the top of his lungs, “Amen sister, Amen!”

This same neighborhood was bleak in 2020, with empty streets and mobile morgues outside of overwhelmed hospitals. In the US, over 200,000 long-term care residents and staff have died from COVID-19, according to a count from the Centers for Disease Control and Prevention. In five states, they accounted for more than half of COVID-19 deaths up through 2021. But since the vaccine rollout, they make up a much smaller portion of COVID-19 deaths in the US.

All across the country, nursing home residents didn’t have visitors other than staff for months, and sometimes more than a year. In March 2020, the Centers for Medicare and Medicaid Services banned visitors from nursing home facilities, and administrators have dealt with regularly changing guidance on visitation since.

Cleopatra Mullings, 84, who resides at the Upper East Side Rehabilitation and Nursing Center in New York, didn’t see her son Gene Mullings for a year.

“I think about it sometimes, but I try to push that thought back,” she said from her wheelchair, with her son sitting beside her on a Sunday in September. They were participating in the weekly worship service put on by volunteers from Hope for New York, an organization that partners churches with other organizations serving the city.

Nursing home residents would like to forget the isolation of the previous two years, but the new norms of postpandemic life mean that a few infections might close a home to visitors for a week, a month, or more. Before the pandemic, nursing home residents dealt with social isolation, but if norms from the pandemic lockdowns continue, they could be more isolated than ever. Some churches and ministries are responding to this new reality by expanding their work in nursing homes.

An October 2020 survey of nursing home residents by healthcare nonprofit Altarum found residents’ activities inside homes (including religious services), their visits, and trips outside all dropped precipitously since the pandemic restrictions.

Another survey from January 2021 of residents’ families reported that, when they were able to finally return to visit, they found their loved ones in extreme mental decline. Residents wept, stared vacantly, hallucinated, or stopped walking. Some nursing home staff reported that residents had stopped eating.

“Although the regulations were deemed essential to COVID-19 containment, the continuation of this lockdown for a prolonged time has resulted in potentially irreversible physical, cognitive, psychological and functional decline,” said one 2020 paper in the Journal of the American Medical Directors Association, which focuses on geriatrics.

Ministries want to be careful about seniors’ health while also attend to the deep loneliness they are finding in these facilities, as well as the exhaustion and stress among nursing home staff.

“The isolation is, without question, devastating to the souls of the people,” said Bill Goodrich. He leads God Cares, a 30-year-old organization to support about 10,000 nursing home ministry volunteers. He has been visiting residents since September of last year and says, “They’re numb... They’ve turned off. They just exist. …They’re not dying from the one thing, but they’re dying from the other thing.”

The pandemic did bring attention to residents’ plight. Ministries are trying to return relationships and joy in homes in creative ways, like enlisting elementary classes to write letters if a facility goes into lockdown. The window visits that took off during the pandemic have continued when the visitor or resident is sick. Homes and ministries are better at using technology for outside connection, with Zoom Bible studies and Facetime calls.

On the Upper East Side, Gene Mullings has visited his mother every day since the facility incrementally opened up. Visitors at this facility take a rapid test upon arrival and wear masks.

“She’s a trooper,” Mullings said, wrapping his arm around his mom.

Cleopatra Mullings’s facility has a host of activities now, and she is signed up for all of them: jazz, karaoke, a reading group, bingo, and Sunday worship. The Mullings family is part of a Lutheran church and the Christian Cultural Center in Brooklyn.

This Sunday, the scheduled preacher for the day got stuck in a malfunctioning subway train, so Mimi Weinstein gave a brief message. She read the biblical text the pastor had chosen, John 5:19–23, and then asked the room, “What are some miracles Jesus did?”

“Healed the blind!” said one resident.

“Raised the dead!” said another.

Weinstein read John 5:20 again. She talked about Jesus being the vine, and his followers the branches: “We are getting all the nutrients we need by the vine. And we can bear fruit. Are we loving? Are we peaceful? Are we patient? Are we doing good? Are we gentle with one another?”

She went on: “There’s more we need than food and clothing and entertainment. There’s something more we need for nourishment, which we get by sticking with Jesus.”

Kitty Foth-Regner has volunteered at a 100-bed nursing home in Milwaukee for more than 20 years. Before the pandemic, she used to visit 15 to 20 residents every week and lead a weekly Bible study and a monthly hymn sing. Now she only visits three or four residents individually each week, and only one church volunteer comes with her. Other volunteers switched activities when they couldn’t get into nursing homes for so long.

Because of privacy laws, she doesn’t know what happened to the residents she used to visit: “There were few funerals during the pandemic, and little in the way of published death notices,” she said in an email.

A few weeks ago, Angela Hey, who is both board chair and volunteer pianist for SpiritCare Ministry to Seniors in California’s Bay Area, was supposed to go to an assisted living home to play hymns. But three residents had just died of COVID-19, and the home went into lockdown. It was pouring rain outside, so SpiritCare couldn’t have a service outside on a patio, the usual backup plan.

“It’s like Whac-A-Mole; just when we think we’ve got the schedule all worked out, someone says, ‘We’re going to shut down for a couple of months,’” Hey said. But long-term mass shutdowns seem to be over.

When Hey was allowed to come back to play piano about six months ago, the residents were “thrilled,” she said, even though “I’m not the best pianist.” Some residents had given up walking when they had no one to visit and walk alongside them, but Hey said residents are starting to walk again.

SpiritCare has learned some things from its pandemic ministry: It did Zoom services during lockdown but found that, especially for patients with dementia, the big heads of people on a Zoom screen were disconcerting.

“It’s like a monster,” Hey said. People did better with individual Facetimes, so one of their chaplains would walk around with a tablet and hold it for residents to do Facetime calls.

During the height of the pandemic, one resident had asked for prayer, and a volunteer began calling the resident to pray with her every week. The volunteer said the resident burst into tears during the first phone call.

SpiritCare has, like others, ministered to staff too, who are grieving the loss of residents and even some coworkers. Homes are often short-staffed and dealing with the stress of regular turnover. Families pulled family members out of elderly care homes because of the pandemic, Hey said, which created even worse financial problems for the homes.

Sometimes when a church wants to start a ministry, Goodrich from God Cares said the church will want to just convert all the residents: “That’s cool but it’s not how it works. … You have to provide something that assists the staff. … We’re going in not to do our thing, but to support their home.”

He suggests asking a facility’s activity director how to help meet the spiritual needs of the residents. After decades in the work, Goodrich said that ministry in a nursing home often starts with visiting a friend and then visiting others. “Because there’s such a need, you can’t help it.”

For almost a year, no one could visit the two members. Church staff and volunteers called them on the phone and got them tablets to watch Sunday services. Another Tenth member worked at the home and kept an eye on them and their health.

“The pandemic helped us to realize there is a sense in which nursing home residents are like prisoners,” said Enrique Leal, who leads Tenth’s mercy ministries. “They cannot get out, and during the pandemic they were not allowed to see people.”

Leal and his staff prayed about how to restart all their mercy ministries to international students, immigrants, prisoners, the homeless, the deaf, and those in nursing homes. Their prison and nursing home ministries were the toughest to figure out—Tenth couldn’t return to a detention center in the city to do its weekly Bible study until September.

At the nursing home, eventually Leal and one other ministry worker could—with a rapid test, a temperature check, and masks–go to the lobby of the nursing home. Staff would bring the two residents to the lobby, and they would meet with Plexiglass between them.

For months, they read the Bible together, prayed, and took Communion. Now the staff lets them meet in a room that used to be a cafeteria. The Tenth volunteers now do a monthly worship service, a weekly Bible study, and monthly Communion during Bible study. A few weeks ago, another resident became a Christian.

“I think it was a good testimony for the people in the lobby,” said Leal. “Some of the other residents started to be curious.” People were hungry for fellowship, Leal said.

Despite outbreaks and shutdowns, Leal estimates their ministry is doing 60 percent more in the nursing home than it did before the pandemic. He hopes eventually they have enough volunteers to do a weekly worship service.

At the weekly service on the Upper East Side, Gene Mullings bragged about how well his mom was doing post-pandemic. She went into the nursing home three years ago weighing 117 pounds and has gained 50 pounds as her health improved.

“I give all praise and glory to God,” Mullings said, adding that they would be at the worship service next week.