When making a living feels like dying, how can a pastor help?
Robert L. Veninga 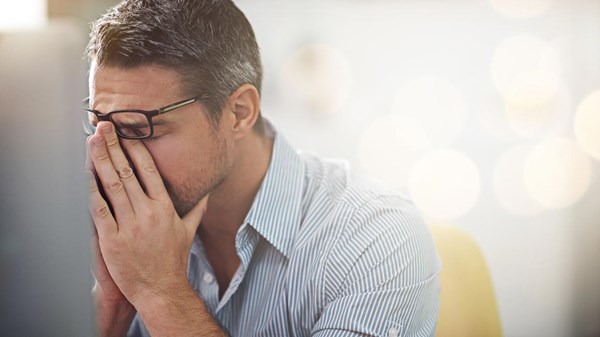 "I get a knot in my stomach every Sunday evening. I dread the coming week. I work for a boss who seldom shows an ounce of compassion and never tells me whether I have done a good job. I feel tremendously alone in this company. I work with colleagues who really aren't friends. I spend most of the day on the telephone or pushing papers to another office. Seldom do I see the end result of my work, and frankly, I haven't felt good about what I'm doing for the past half dozen years. But it's hard to quit when you are paying off a mortgage and have two kids to put through college."

The pain in this man's expression is not unusual. As a church leader you minister to people at birth, marriage, illness, retirement, and death. But millions of people bear a silent crisis almost alone—the crisis of a soulless job.

Americans are having increased difficulty coping with their work environment. The Opinion Research Corporation of America has found that workers are more dissatisfied in their work now than at any time during the past twenty-eight years. In a survey of 2,821 executives by the American Management Association, 52 percent found their work unsatisfying. In a 1980 Gallup poll, the researchers asked: "Do you enjoy your work so much that you have a hard time putting it aside?" Fifty-two percent responded in the affirmative twenty-seven years ago. Today, only 34 percent respond positively.

What can you do to help your parishioners with problems at work?

First, find out what members of your congregation do for a living. This includes (a) the worker's responsibilities, (b) the quality of on-the-job relationships with supervisor and peers, (c) the rewards of the job, and (d) the threats of the job, both physical and mental.

Visit with workers on the job site. Most members would love to show you what they produce with their hands and the ideas that absorb their minds. Many will confide their frustrations and hidden pain. You may be the first pastor who has shown an interest in their working lives.

At the job site, most workers will bubble over with enthusiasm as they explain the intricacies and complexities of their working lives.It's as if suddenly, after years of employment, someone has taken an interest in this vital part of their lives. Paul Tournier once reflected: "A worker can spend years in a factory, shop or office without meeting anyone who takes the slightest interest in him as a person. The daily routine, together with the prevailing atmosphere of our times, makes it possible for him to associate with companions whom he really does not know and who do not know him."

Second, be sensitive to the frustrations that individuals may be having with their work. In economic hard times, more and more people are seeking out pastors for counsel on dead-end jobs, unrealistic workloads, boredom, a punitive boss, and the prospect of unemployment. Be aware of the five stages in the job dissatisfaction cycle:

• In the first stage, job contentment, workers report that they "love their job" and "everything is going great." Frequently they report working sixty, seventy, or more hours per week. While on the surface everything appears to be going well, vital adaptive energy is being consumed.

• If that energy is not replenished through sound exercise, sleep, and vacations, individuals move into stage two, which is job disappointment. They complain about tiredness, and lack of energy, and an inability to sleep soundly. Frequently they comment on their lack of creativity and their inefficiency. One executive in this stage noted: "I guess I have been hitting it too hard. I don't have any spunk. I feel jaded and indifferent." He indicated that he is never caught up, a common feeling among individuals in this second stage.

• In the third stage, job disillusionment, the person feels exhausted. Symptoms of ill health become acute: "I became almost physically ill," said one worker. "My body ached as if I had a viral illness. I got tension headaches and was nauseated." Anger often accompanies the physical symptoms. The worker resembles a volcano on the verge of eruption.

• In the fourth stage, job despair, workers have few waking moments when their thoughts are not riveted on their jobs. They think about their problems driving home and while watching television. Over and over again they replay the day's events and come away feeling, "This job is bad for me; the problem isn't going to go away." At times the individual wants to look for an escape hatch by fleeing the job or the family or even the whole way of life.

• In the final stage, hitting the wall, workers often find they cannot continue working. Some turn to drugs and alcohol; others experience serious physiological deterioration.

Often they have too many goals, while others have too few. Dr. Alaman Magid, a San Diego physician, assists patients under stress with a set of techniques he calls "time therapy." He has found that positive visualization undertaken in the early hours of the day helps give a sense of contentment with one's work environment. So he has his clients write out their goals for the day, visualizing what the entire day is going to be like.

Helping counselees establish leisure goals is also important. If you are counseling someone in stages four or five, you might suggest a short vacation. Several three or four day vacations may be more helpful in restoring adaptive energy than one long vacation.

One of the best and quickest antidotes to work stress is exercise. Recommend walking a mile or two every day. One worker who almost had a breakdown because of employment pressures became an enthusiastic racquetball player. Later he confided, "Playing racquetball has helped me handle the pressure."

Scientists recently studied a group of workers at Exxon's physical fitness laboratory in New York and found that after only six months of exercise, workers had a significantly increased capacity for work. Most reported that they felt less tired and had more energy. Researchers at the University of Wisconsin who studied the value of jogging as a treatment for depression found that at the end of ten weeks, individuals who were exercising regularly showed more improvement than those undergoing traditional psychotherapy.

Fourth, develop a theology of work. Central to such a theology is the belief that all work can be sacred.

Sigurd F. Olson devoted his life to protecting the wilderness and the serenity of nature. For him, all life was sacred. He fought many battles with people who wanted to exploit forests and lakes. But whatever the outcome, he had a way of affirming others and affirming the meaning of his own work as an environmentalist.

At the age of eighty-two, he died while snowshoeing in northern Minnesota. After the funeral, friends went to his wilderness cabin, where he had written many books. In the typewriter was a sheet of paper that read: "A new adventure is coming up, and I'm sure it will be a great one."

If we could instill that kind of positive outlook in church members, their work can become an integral part of their exciting life in Christ.

Discipleship
So What Exactly Does a Pastor Do?
My job is to pray for you, whether you're a Christian or not.
columnist Marshall Shelley
Trending