Before creating such classics as 1984 and Animal Farm, George Orwell was a policeman in the dusty village of Moulmein in Lower Burma. Once an elephant temporarily went berserk and tramped about wildly. The villagers ran for the authorities, who happened to be Orwell on duty alone. As he walked, rifle in hand, to where the beast was last sighted, thousands fell in behind him—clamorous, festive, anticipating the ripe spectacle of an elephant shoot.

Orwell found, however, a quiet animal who now seemed intent on nothing more than grazing. "I did not want to shoot the elephant," he wrote. "I watched him beating his bunch of grass against his knees, with that preoccupied grandmotherly air that elephants have. It seemed to me that it would be murder to shoot him. … At that moment, with the crowd watching me, I was not afraid in the ordinary sense, as I would have been if I had been alone. A white man mustn't be frightened in front of 'natives'; and so, in general, he isn't frightened. ...

Discipleship |Leadership|Outreach
The Hopeful Reality of Church Scandal
Humbled by recent events, the church has an opportunity to shine even more brilliantly.
Karen Swallow Prior
Trending 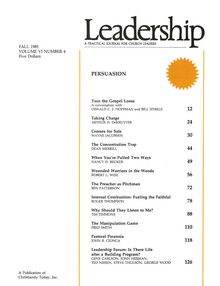 This article is from the Fall  1985 print issue of Leadership Journal. Subscribe to continue reading.