While a student at Union Theological Seminary following an early career as a teacher and writer, Frederick Buechner took part in field education in New York City. The following excerpt from Now and Then relates a slice of his experiences.

In addition to the worlds of Union and home, there was also the world of East Harlem, where, as part of the fieldwork program, I found myself running what the parish called an "employment clinic," though all it was was me sitting with a telephone and no other qualifications in a storefront office on 104th Street.

I was born in New York and had lived there off and on all my life, but the New York I knew was bounded by Central Park to the west and Lexington Avenue to the east, to the north by 96th Street and to the south by Grand Central Station. Broadway theaters took me to the west side every once in a while and secondhand bookshops to the lower reaches of downtown, but by and large the city I knew was one relatively unscarred by violence, poverty, ugliness. ...

Discipleship
Small Groups: How One Church Does It
A pastor shares a working model of how Christians can build supporting relationships into each other.
James R. Tozer with Daniel W. Pawley
Trending 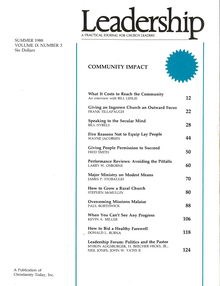