In the early 1960s at Dallas Theological Seminary, a young student named Chuck Swindoll was advised, "Be on the lookout for a professor named Howie Hendricks. He's a man worth getting to know." That advice led to a mentoring friendship that continues to shape the lives of both men.

Hendricks is celebrating his fiftieth anniversary at the seminary. Swindoll is now the school's chancellor, after seven years as president, even as he continues his Insight for Living radio ministry and pastoring Stonebriar Community Church in Frisco, Texas.

Mentor and student were reunited as Leadership's Marshall Shelley asked them to reflect on their relationship and what it takes to keep yourself growing.

Howard, what do you remember about Chuck Swindoll as a student? What was your first impression?

Howard Hendricks: What impressed me about Chuck was he sat right under my nose right in the first row.

Hendricks: He needed an umbrella. (Laughter) 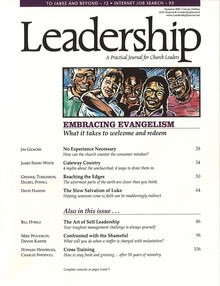 This article is from the Summer  2001 print issue of Leadership Journal. Subscribe to continue reading.