Our church’s walk with a homeless man marked us indelibly.
Fred Liggin 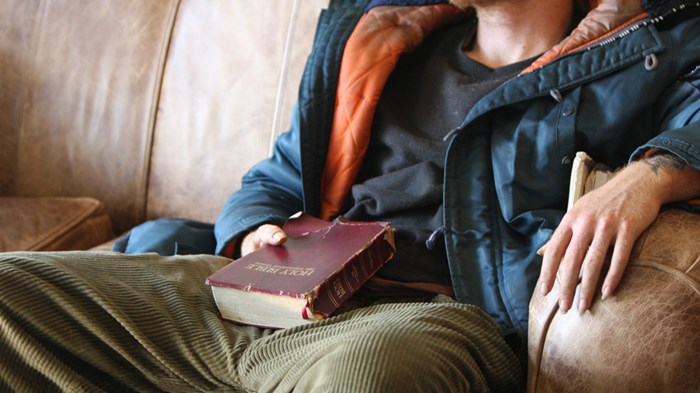 Tommy walked into our worship gathering almost three years ago. With his bushy red hair, he was hard to miss. Every Sunday he would stumble in, taking the last seat of the last row in the worship center. The smell of alcohol and homelessness surrounded him.

But so did our church family.

Tommy wasn’t the first homeless person to walk into our lives and he certainly wouldn’t be the last. But we also knew that someone like Tommy didn’t want to be crowded, so we gave him his space … until he began weeping. Without fail Tommy would weep during the song after the Sunday message and without fail someone in our church would wrap an arm around him, making sure he didn’t weep alone. When the gathering ended, Tommy would wait in the back to shake my hand and then leave for home—a tent nestled far back in the woods.

Having walked with some friends from homelessness to holistic sufficiency, I asked others about Tommy. The word on the street was that he had been estranged from his family for over a decade. While he was a kind man who took great pride in his work as a skilled laborer, it was also clear that Tommy faced many barriers, including mental illness accompanied by a 40-year addiction to alcohol and eight years of homelessness.

Tommy faced many barriers, including mental illness accompanied by a 40-year addiction to alcohol and eight years of homelessness.

Eventually Tommy and I became friends and shared many cups of coffee together, though we never talked about moving out of homelessness. He knew about our 3e Restoration Process, a highly relational, curriculum-guided process, where as a church we could walk with him from homelessness to holistic sufficiency. But he wasn’t ready for that. He just wanted a place where he was welcomed, safe, and could encounter the God of the Bible he read often.

Tommy entered into 3e Restoration Process and we began addressing the cognitive, emotional, social, physical, and spiritual realities arising from years of homelessness. Now his church gathered around him in a very particular and intentional way. Despite his literacy challenges, Tommy was learning tools that pushed against his impulsive responses grounded in his posture of living to survive. Tommy began slowly accepting invitations to share meals and spend time with others. He even would join my son and me on Sunday bike rides that, in the mind of my six year old, quickly became a tradition since Tommy was “family.”

For Tommy, life was getting better. Once hopeless, he now had hope. Once forgotten, he now had family. Once hurting, he was healing. But life wasn’t easy. Mental illness and alcoholism riddled his journey with discouragement. But Tommy was doggedly determined. For the first time in his life, he was experiencing freedom from some of the patterns of his past. We were all proud of him and thankful for what God was doing in his life.

Soon Tommy decided he needed a professional counselor so he could address some of the underlying conditions of his alcoholism, including past narratives influencing his life. At first this was hard; trusting others wasn’t easy. After several positive meetings, it was suggested he meet with a psychiatrist to evaluate his mental health concerns. Hesitantly, Tommy agreed. After 15 minutes of seeing Tommy, the psychiatrist impetuously informed him that a relapse to alcohol was imminent and that after he “falls off the wagon,” he could come back and get the proper medications he needed.

The doctor’s words were the beginning of the end. This psychiatrist didn’t know all Tommy had accomplished, and he didn’t know that this sort of statement echoed the same sentiment Tommy had heard throughout his life, beginning with childhood. It was “trigger-language” sending Tommy right back into his fear response—flight.

Tommy called me immediately and said, “I’m done. The doctor doesn’t believe in me and says I’ll never overcome the alcohol. Maybe he’s right. I just need to go back to my camp and be alone for a while.” He had said things like this before and I was usually able to talk him into pressing on. This time was different. He wasn’t listening or relenting. And he left. That was the last I heard from Tommy.

One week later, I received a call from a friend at the fire department. Knowing Tommy and I were close, he told me that Tommy’s body had been found in the woods. Apparently he died four days prior, and his body was decomposed. Tommy, my friend and brother, died all alone. My heart was broken.

As a pastor I am well acquainted with death. I have stood in the “thin place” of countless bedsides as people took their last breath. Each time they were surrounded by loved ones and didn’t die alone. And if by some chance they did, they were loved in life and death, and received a dignified burial. Tommy died alone and was left for dead for four days. And if my church family—his church family—didn’t step up, his remains would have been shipped to some graveyard in southern Virginia where all the “indigent” are buried. We could not let that happen. Tommy was family and we loved him in life, so now it was time to love him in death.

The next Sunday I informed our church family of his passing. The floodgates of grace opened up as the tears poured out. Intuitively our family responded with donations, insuring that Tommy would have a proper burial. I coordinated with other local pastors and service providers who served Tommy over the years. We all came together to provide a meaningful celebration of life service for Tommy. Even Tommy’s estranged daughter and brother were present. It was a beautifully redemptive day, and afterward we laid his ashes to rest at a columbarium, paid for by another anonymous Christ-follower.

The past three years with Tommy was a journey filled with many ups and downs. Tommy’s life and death reminded us of many things, and even taught us some that are new.

For one, we were reminded that everyone needs to be needed. Being needed is part of what it means to be created in the image of the Triune God. We are hardwired for relationship—for community—as our lives are inextricably connected to others. When we finally awaken to the reality that we belong to God, we also discover that we belong to one another. This compels us to learn how to live with self-giving love. In this kind of community, our lives are (re)formed for humility, mutual submission, and reconciliation. We can offer those who've been abandoned or feel alone beloved community; we become a tangible sign of God's kingdom and presence in our world. We remember that if the Incarnation teaches us anything, it’s that no one deserves to be abandoned. This is one of God's beautiful purposes of his Church but is only manifest when the Church is faithful to Jesus as Lord.

Tommy’s life and death taught us that when a church takes hospitality seriously, it is never safe. The people are committed to doing the hard work of drawing close to another and welcoming others, despite fears and vulnerability. When a church, practicing hospitality, orients its life toward the least, last, left-out, and lonely, we enter a particular form of vulnerability that means we will suffer, as a community. Suffering becomes more than mere sentimentality because it comes from a commitment to mutual submission and leads to mutual responsibility for one another. Particularly, as we share in the burdens of people living through homelessness, addiction, and absolute loneliness, we learn that we must love them not only in life but in death too.

In my work as a pastor and president of a non-profit dedicated to equipping local churches to walk in intentional relationship with people living through homelessness, I have found that many churches want to reach “the broken.” I believe their desire is sincere and comes from a commitment to follow Jesus into the hard places of society. Usually this amounts to program-centric efforts like meals, shelters, or recovery ministries where the socially displaced experience transactional engagement. Churches don’t mean it this way; it just happens. But friends like these need churches to move beyond transactional engagement and into relational engagement where the journey is hard, unpredictable, non-programatic, and friendship-centered.

Doing this is choosing the difficult and costly commitment of practicing gracious hospitality and self-giving love. Not only does it cost churches more than a few difficult discussions with hesitant members, it costs time and resources, and will amount to some measure of communal suffering. But with the suffering comes an invitation to lean upon the One who suffered the most as he welcomes us into his peace and provision. Here we are called to lean upon collective resources to love well in life and love well in death. Here we find the courage to begin again and again, doing as God has always done and relentlessly welcoming all others into our lives and into the life of God, with self-giving love.

In life and in death Tommy taught my church family how to love more faithfully. I pray we will.

Fred Liggin is a pastor at Williamsburg Christian Church, founder and president at 3e Restoration Inc, and Mid-Atlantic Coordinator at Mission Alive. He lives in Williamsburg, Virginia.

How Exercise Nearly Killed me
If church potlucks don't get you, the fresh air will.
Richard Asmussen
Trending