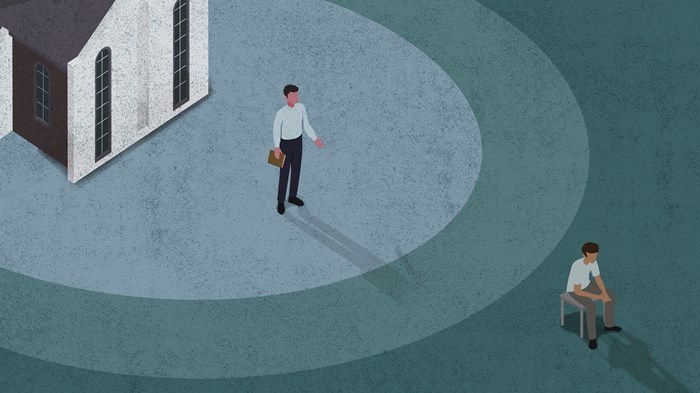 My wife, Susan, comes from a Christian family of nine kids. They had lots of family times together around a long table. (Her father considered installing a drain down the middle to catch all the spilled milk.) But one thing Susan rarely got was time alone with both of her parents at once. In fact, she remembers only one occasion, and she remembers every detail. As with my wife’s family, seeing that each person in our church family gets personal attention is difficult, but it’s part of a church being a home.

Eugene Peterson once said that next to the Bible, the church directory is the most important book in the pastor’s study. Near the beginning of Peterson’s book, Five Smooth Stones for Pastoral Work, he writes,

It is the unique property of pastoral work to combine two aspects of ministry: one, to represent the eternal word and will of God; and, two, to do it among the idiosyncrasies of the local and personal (the actual place where the pastor lives; the named people with whom he or she lives). If either aspect is slighted, good pastoral work fails to take place.

Sometimes churches forget that names matter. I remember talking to a staff member of a church of about 400. Their staff had gone through the church directory and realized that half the people listed were unknown personally to any of them. That’s not a healthy family.

At the end of Paul’s letter to the Roman church he mentions 33 names, each precious to Paul.

I commend to you our sister Phoebe, a deacon of the church in Cenchreae. ... Greet Priscilla and Aquila, my co-workers in Christ Jesus. They risked their lives for me. Not only I but all the churches of the Gentiles are grateful to them. Greet also the church that meets at their house.

Greet my dear friend Epenetus, who was the first convert to Christ in the province of Asia. Greet Mary, who worked very hard for you. Greet Andronicus and Junia, my fellow Jews who have been in prison with me. They are outstanding among the apostles, and they were in Christ before I was.

He goes on to his “dear friend” Ampliatus, his “co-worker” Urbanus, Apelles, “whose fidelity to Christ has stood the test,” Rufus, “chosen in the Lord, and his mother, who has been a mother to me, too,” and others. He never asks how big the congregation is now. He just asks about the people and sends greetings to them from eight specific people who were with him.

I grew up in a small rural church in South Dakota where it wasn’t a problem to remember names. We knew a lot more about one another than names! The church I now serve in the northern suburbs of Chicago is different. We might have 200 people on a Sunday morning, but the names keep changing. In a recent five-year period, we said goodbye to 261 people and welcomed 261 people. That’s a lot of goodbyes and hellos, and those are a lot of names to learn. But if we’re going to be a family, learning names is a priority.

When I called Pat by name on her second Sunday her eyes got wide. “How did you remember my name?” she asked. I didn’t tell her that I work at it. Learning someone’s name is an introductory act of Christian love. We can’t dismiss this duty by saying, “I’m just not good with names.” If that’s the case, then you’ll just have to work harder at them. The second time folks show up in church I want to call them by name, because I am a shepherd and they may become my sheep.

Names are sticky. Once you learn someone’s name you can start attaching details to it: a hometown or a profession, a personality type or a testimony of faith. But without a name you can’t do much more than be an acquaintance.

Jo and Arthur were part of our church for just two years while Arthur was in seminary. They’d been part of large churches in Singapore and Australia. They had loved those churches and admired their pastors, albeit from afar. When they left Village Church, Jo wrote of me in her blog, “He is the first shepherd on earth who knows my name. I will never forget the first time Pastor Lee called my name in the foyer the second Sunday we met. I was moved beyond words. I am truly thankful for a shepherding pastor who knows me.” Names matter.

In a classic sermon on Romans 16 entitled, “When the Roll Is Called Down Here,” Fred Craddock concluded with these words to pastors:

Write these words: “I thank my God for all my remembrance of you.” Now write a name. Write another name, and another name, and another. Keep the list, because to you, it’s not a list. In fact, the next time you move, hold on to that list. Even if you have to leave your car, and your library, and your furniture, and your typewriter, and everything else, take that list with you. In fact, when your ministry has ended and you leave the earth, take it with you .

One-on-one pastoral care is every pastor’s inefficient imperative. It invariably seems we could get more done if we were left alone to study or plan, or if we could be with a group of our people all at once to teach or worship or just eat together. There is this powerful instinct to always shepherd the flock in bunches, in herds, because it seems patently obvious we’d get more done. But efficiency is a poor pastoral master.

We would hardly know Jesus if it weren’t for all his personal encounters in the Gospels. Peter at his nets, Matthew at his tax table, Mary at Jesus’ feet, the desperate centurion, the raving demoniac, Nicodemus, the woman at the well, the thief on the cross. Jesus met people one-on-one.

I wonder whether, in some divine miracle, a whole church has a sense of being shepherded well when only one or two actually had the shepherd’s attention. The 99 in the fold are better off—healthier, more content—when the one lost sheep is carried home to the flock. Heaven is certainly the happier for it.

Marv would just drop by my office. No appointment. Just stick his nose in my door and strike up a conversation. (Not all pastors have gatekeepers.) He was needy. He really was. And it helped him to talk. It frustrated me to pieces, and sometimes I told him I was busy. I never felt those visits were very useful because he never seemed to get better, but I eventually decided that what Jesus had me doing was washing Marv’s feet.

Pastoral work is humbling. It’s humbling because we so frequently feel inadequate but also because it is often such small work. A pastoral friend writes a birthday card to every person in his church. Small work. Another quietly prays through the church directory. Small work. We call on people and no one ever hears about it. We sit and make small talk with someone while trying not to worry about our unfinished sermon. Small work. We pray for a tenth grader’s audition or a 45-year-old’s job interview. We take a newcomer to lunch or help arrange some funds for a sister with a need. Small work.

I can think of few Christians who have more opportunities to get rich slowly than pastors. When we were trudging down hospital corridors or going back to the church for evening counseling, when we were squeezing in a visit to a shut-in or meeting with a 17-year-old just to talk about school, we were bringing food to hungry hearts. We were inviting in strangers. We were clothing people—maybe in garments of white. We went into prisons, some with unseen bars, and jingled the keys of grace. “The King will reply, ‘Truly I tell you, whatever you did for one of the least of these brothers and sisters of mine, you did for me.’” It was so ordinary, so small, but look where it got us: “in his glory, and all the angels with him.” This is what pastors do if we want to minister like Jesus. It is inefficient, to be sure, but that’s how it is.

Lee Eclov is pastor at the Village Church of Lincolnshire (north of Chicago) and an adjunct professor at Trinity Evangelical Divinity School.

Taken from Feels Like Home: How Rediscovering the Church as Family Changes Everythingby Lee Eclov (©2019). Published by Moody Publishers. Used by permission.

The Introverted Leader
Even if you struggle to be a "people person," you have much to offer the church.
Adam McHugh
Trending