And how can they avoid the allure of the self-destruct button?
Stephen L. Woodworth 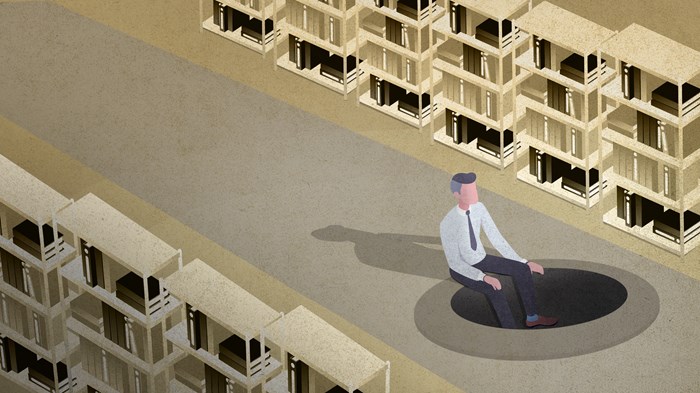 Can we be brutally honest with one another for a moment? Can I ask you, pastor to pastor, the question that no one dares to ask?

How often do you want to quit?

I do on those Monday mornings when the post-sermon blues hit me so hard I could stay in bed for days. When people judge my children, second-guess my motives, and criticize my teaching. When I spend another sleepless night on the couch, in the silence and stillness of my house, wondering if there might be anything else in the world someone like me could do, but when the thing I know how to do best is pastor the souls of broken men and women.

These haunting questions are the unspoken underbelly of the pastoral calling. They are asked by those torn in two by the burden of their calling and the desire for escape, those who have invested too much time and money building a platform they can’t afford to lose, and those who wake up some morning to discover that all the years of preaching truths they never experienced themselves bored a deep cynicism into their souls.

This kind of pressure pushes some pastors toward the light, draws them closer to Christ, and grows them into greater spiritual maturity. Yet it casts others into the darkest of corners, sends them running away from Jesus, and tempts them to give in to temptations that have haunted them for years. While many pastors handle the burden of ministry with grace for decades, why do some crash and burn in only a few years?

Many people believe the reason is quite simple: the sinful human heart. This is true, of course, but also vague enough to be of little value for those seeking a specific prescription. Others suggest pride or a culture of celebrity that elevates pastors above the law. Still others talk about pastors’ isolation, their lack of confession, their diminished willingness to engage in self-reflection. Or as my wife suggested, some pastors have gotten so used to faking it that this becomes the norm in every sphere of life. Undoubtedly these all play a role in pastoral failure.

But I want to suggest another option: Some pastors sabotage their ministries on purpose.

I often read that pastors never decide one morning to become addicted to pills, to bed down with someone other than their spouse, to endlessly click through pornographic websites, or to drink until life becomes a dull blur. And while it’s true that these decisions probably aren’t spur of the moment, we deceive ourselves if we pretend pastors never willingly and intentionally decide to fail. Some do.

As Carey Nieuwhof reflects, failure is sometimes the quickest escape.

When I first started out in ministry, I met with a pastor who had just had to resign because of an affair. He was 20 years my senior, and we met for lunch.

I asked him why he had an affair, and he told me in part it was because he couldn’t handle the pressure of ministry anymore but couldn’t find an easy way to get out. The affair forced him out.

Years later I would discover the pain of burnout personally. … I was so burnt out an escape from my life looked appealing. By the grace of God, I knew enough to keep my head in the game even though my heart had stopped working. As a result, during my darkest months, I kept saying to myself “whatever you do, don’t do anything rash—don’t cheat on your wife, don’t quit your job and don’t buy a sports car.”

In its simplest terms, self-sabotage, or self-defeating behavior, includes any behavior that undermines a person’s own goals. Psychologist Ellen Hendrickson suggests that, among other reasons, many people self-sabotage because it gives them a feeling of control over their situation. She notes, “It feels better to control your own failure. At least when you’re steering the ship, going down in flames feels more like a well-maintained burn.”

Others may sabotage themselves due to insecurity. Many pastors feel like imposters, and it may feel easier to fail morally than face the potential of being fired for inadequacy. “How does this manifest?” asks Hendrickson. “Feeling like a fraud easily leads you towards procrastination and diversion—if you’re faced with a task that makes you feel like a phony, it’s a lot more tempting to … realize there’s no time like the present to immediately start a DIY spice rack project.”

And then there are those who pursue self-sabotage as a way to return to a sense of equilibrium. To one degree or another, every pastor feels the gnawing sense of their own hypocrisy. We are called to preach, week after week, about a vision of Christianity that we may not fully experience, a love from God we sometimes don’t feel, prayer we don’t practice, parenting and marriage advice we forget to employ in our own homes, forgiveness we struggle to give, an identity in Christ in which we struggle to stay rooted. Amid that tension, pastors may look for a way to balance others’ external expectations with their internal reality. The higher the pedestal, the stronger the pull back down.

I do not believe pastors misunderstand the ramifications of these sort of actions. Certainly, many have successfully hidden their sins for years, but the truth usually finds its way to the surface. And when it does come into the light of day, pastors can’t speak about biblical ignorance or moral ambiguity. Indeed, perhaps the greatest irony of pastoral failure is the amount of teaching, preaching, and writing pastors have often dedicated to decrying the very sins that lead to their fall. Pastors are uniquely positioned to understand the gravity of their immoral decision. This is precisely why their moral failures are more shocking, and why it is difficult to deny that, at least in some cases, pastoral failure is an intentional push of the eject button.

Even while I use the word intentional, it is important to remember that the motives for our self-defeating behavior may be hidden from us in the moment. As with many poor decisions we make, our motives may be limited to hindsight. Such is the case for Darrin Patrick, who underwent three years of restoration since his firing from The Journey church in 2016. After years of counseling, reflection, prayer, and repentance, Patrick came to understand his own act of ministerial self-sabotage was driven by a deep need to be rescued and rebuked:

Perhaps most important for Patrick during his season of restoration was the counsel he received from CrossPoint Ministry founder Richard Plass, who shared with Patrick, “You have been crying out for help since you were a little boy; you’ve been wanting somebody to come and be your dad, be your older brother. You’re acting out in order to be rebuked.”

Stepping Back from the Ledge

I shared these reflections recently with some pastoral colleagues who resonated with many aspects of the self-sabotage temptation. When I asked them how they had managed to avoid this fate, a few themes repeatedly rose to the surface of these conversations.

Several pastors mentioned that their primary driver of frustration, disillusionment, and sometimes despair is the inherently dehumanizing nature of ministry. In too many churches, the pastor is a role, not a person. Pastors fulfill certain duties—they pray, they preach, they visit, they counsel—but many don’t feel seen as individuals. When someone or something makes a lonely pastor feel “human” again, that pastor may struggle not to run straight into its arms. And the temptation grows even stronger when giving in to it might provide an easy out from a ministry that otherwise feels unavailable. This is the temptation Henri Nouwen was guarding against when he wrote about the need for constant community in the life of a pastor:

When spirituality becomes spiritualization, life in the body becomes carnality. When ministers and priests live their ministry mostly in their heads and relate to the Gospel as a set of valuable ideas to be announced, the body quickly takes revenge by screaming loudly for affection and intimacy. Christian leaders are called to live the Incarnation, that is, to live in the body, not only in their own bodies but also in the corporate body of the community, and to discover there the presence of the Holy Spirit.

Second, my colleagues suggested that pastors on the verge of self-sabotage begin to notice the moments in which temptations strike hardest and keep track of when their particular struggle rears its ugly head. Is every spiritual success, every instance of high praise, met with a plunge into the depths of darkness? Pastors on the verge of collapse should ask those who love and know them best if they recognize a pattern in their bouts of depression, anger, despair, or defeats with temptation. If these pastors are seeking a sense of stability to help balance their external persona with their internal reality, they should talk to older pastors about their feelings of inadequacy, their guilt of hypocrisy, and their desire to leap off the pedestal. More ministry “success” will only aggravate the problem.

Finally, and maybe most importantly, my colleagues recommended that pastors learn to grieve. Pastors everywhere, regardless of ministry context, size, or denomination, will sometimes experience a sense of personal loss, betrayal, and anger toward congregants—people who criticized their ministry, tried to get them fired, or consumed their time with petty gripes about music, sermon topics, or the youth ministry. People they poured their life into, yet they still left the church for another one down the street with better coffee in the foyer. People who tried to split the congregation over a trivial issue or personally attacked their spouse or kids. People who hurt them.

Pastors need a way to take these wounds seriously and address them in healthy ways that don’t include passive attacks from the pulpit. They should make time for regular, extended Sabbath rest and quarterly appointments with a trusted counselor who can help them process their pain.

Stephen L. Woodworth is an ordained pastor and vice president of the International Theological Education Network, a ministry arm of the Evangelical Presbyterian Church, World Outreach living in Georgia.

Join the conversation on Facebook
Tags:
Addiction and RecoveryAdulteryBrokennessBurnoutFailureLonelinessPastorsPerseveranceTemptation
Posted:June 6, 2019

Perfume from the Titanic
Service is a sweet-smelling sacrifice.
columnist Eric Reed
Trending