In a short time, one church in multiple locations has become a new normal. A pioneer of the model predicts where it’s headed.
Interview by Kevin Miller and Kyle Rohane 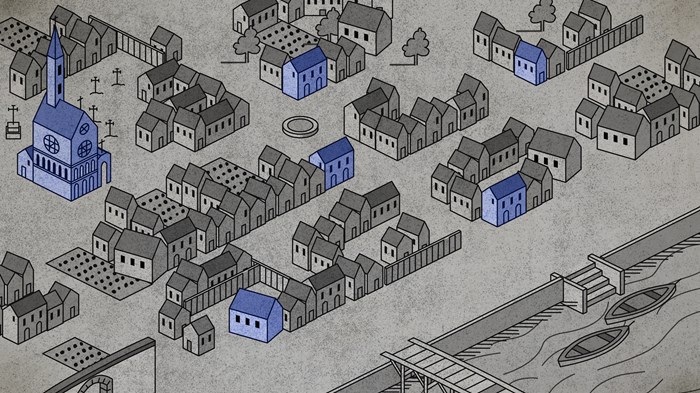 Imagine you are starting a college savings account for your three-year-old, so you put $200 in the bank and want it to become $8,000 just 15 years later. To reach that, you’d need an annual interest rate of 260 percent.

That explosive, unthinkable growth rate is exactly what’s happened with the multisite model of church.

In 2001 Lyle Schaller estimated there were about 200 multisite churches nationwide. Now, according to a Duke University study, there are over 8,000, prompting Greg Ligon of Leadership Network to declare, “Multisite is the new normal."

One pastor who helped pioneer the multisite model is Dave Ferguson, lead pastor of Community Christian Church, with locations throughout Chicagoland; co-founder of NewThing church-planting network; and president of the Exponential Conference. The editors of CT Pastors sat with Dave in the “Yellow Box”—the first permanent site of Community Christian—to find out where multisite is moving next.

What’s your earliest memory of multisite?

I was 24, preparing to plant a church, when I heard Carl George was translating lessons from the largest reproducing church in the world in Seoul, Korea. Carl was talking about celebration and cell. Everybody else thought, This is a hot mess, but I thought it was awesome. So I called Carl and begged him to let me come to his next consultation, and he said, “No, you have to be a big church—and you haven’t even started a church.” But finally he said, “Okay, you can come to Cincinnati, but you have to sit on the observer’s bench,” which meant I could sit on the side and not say anything. But it was a really nice thing God did for me. It was the last thing I heard before we planted a church. So I told my friends who were planting with me, “This is what we’re doing.”

So you had the DNA of multiplication from the beginning?

But you weren’t calling your church “multisite”?

Nobody knew about multisite. Then a couple of real-estate developers became Christ-followers through a small group I was in. They asked me, “This experience we’re having in our small group—how can we get this into the real-estate properties we’re reproducing across the Midwest?”

Their first idea was, “Let’s move our church, meeting in the high school, to a piece of property we have two towns away.”

“I don’t think we can move two towns away,” I said.

The developers then asked me, “Well, why don’t you start a second location?” They had 26 real-estate developments, so why couldn’t we have two churches?

Did that feel crazy?

I went to Lyle Schaller [the late futurist of church life in America], who happened to live nearby. He said, “Dave, you think you’re the only one, but there are about 100 churches that have multiple locations.”

I would credit Bob Buford and Dave Travis and Leadership Network with that number. They identified this innovation early and said, “We need to get these people together.” They asked us to host because Chicago is a central location. Seacoast Church came, North Coast, Lifechurch, Willow—a lot of the early players. But the event was held on September 11, 2001. When that happened, everybody started scrambling to get home.

Though 8,000 churches is a lot, that’s still less than 3 percent of US churches. Why does multisite have an outsized influence?

I think it’s because 62 percent of megachurches are multisite, and megachurches still have the most influence. They are still the fastest-growing portion of the church in North America. The leaders of those churches are also the leaders who speak at the conferences and write the books that others read.

What wins has the multisite model brought to all churches, including ones that will never go multisite?

I think one big win is the reintroduction of multiplication and reproduction back into the church. The critique of the church-growth movement was that it focused on growing and forgot that the purpose of growing is to send. We grow our churches to send out disciples to start new groups, new churches, and other forms of ekklesia.

To encourage reproduction thinking, we’ve introduced the terminology of “Level 5” churches. Level 1 is Subtracting—churches in decline. Level 2 is Plateauing—churches plateaued. Some 80 percent of churches in North America are on one of those levels. Level 3 is Adding—growing by addition. Level 4 is Reproducing—planting new churches—and Level 5 is Multiplying—where the churches you plant are planting others.

What challenges are there in multisite ministry that you didn’t expect?

When we started working as a multisite church, I would say stupid things like, “We don’t have policy. Why would we need policy? The only people who have policy don’t have a strong enough culture to reinforce their values.” But when you get many locations—and some are far apart, so the people on staff don’t get to be together every day—it turns out you need something on paper. So we created “campus constants.” [See sidebar.] We got into a room and made a list of the ten things we agreed on. That gave people the playing field and defined what was out of bounds.

Also, when I started, I told everyone, “Launching a site is easier than planting a church.” I’m not so sure now. Launching a site is like having a kid. When you have a baby, it never occurs to you, “We have to pay for college.” And when I first started a site, it never occurred to me, “You have to pay for all these sites.” I never thought they’d want buildings. I don’t like buildings. I just like to start new things. But in launching sites, just as in raising kids, they wear your name, and sometimes they get into trouble and you have to discipline them.

Have any of your sites said, “I don’t want to be in the family any more”?

Yes. Many times we have sent staff to start independent churches, and that has been a big win. One site, though, we started in an under-resourced and ethnically diverse community because we wanted to make an impact in that neighborhood and to expose the rest of our church to that neighborhood. When the leaders of that site wanted to go out on their own, we allowed them to do it, but it was a loss to the rest of the church, and it hurt.

Where will multisite be 10 years from now? What’s next?

A whole bunch of multisite churches are led by people like me—slightly too driven and ambitious—and I hope God’s redeeming it for some good. Those leaders are asking, “Now that I have many sites, what do I do next?” We’re answering the question this way: a network of church plants.

When you get reproduction in a church happening, you almost have to be intentional about stopping it. Now that a lot of multisite churches have reproduction in their DNA, what I think will be next is launching networks. We tell people, “Start a church-planting network,” and they’re doing it.

For the last few years we’ve led cohorts we call LARN: Leading a Reproducing Network. We gather leaders from five or six large, multisite churches (about one-third from outside the US). We help each team of leaders create a learning plan, then every month teach or meet with them to work on their plan. So far we’ve had 22 churches go through LARN, and there are 760 new, reproducing churches in the pipeline.

Will these networks essentially become denominations?

What would you tell pastors who are not multisite but are looking at the array of models and trying to make sense of what to do?

10 things that hold multiple sites together.

FromExponential: How to Accomplish the Jesus Mission, by Dave Ferguson and Jon Ferguson (HarperCollins, 2010)

This interview originally appeared in CT Pastors’ Guide to New Church Models, which offers an overview of the model-rich landscape of church ministry. It can be found at BuildingChurchLeaders.com.

Cartoon
One Church for All?
Mary Chambers
Trending