How do we combine the total-kill (annihilation, genocide) texts with the drive-out (exile, expulsion) texts? Is one more important than the other? One the means of the others? Contradictory? In William Webb and Gordon Oeste, in their Bloody, Brutal, and Barbaric? book that examines this topic with comprehensive thoroughness, one chapter is devoted to these questions, and for many their conclusions will be compelling.

A problem facing any reader of the Bible is that the total-kill instructions seem to contradict the drive-out instructions if both are taken literally. If the Israelites are instructed to kill (literally) all Canaanites, why are they also commanded to drive them out of the land?

The three options can be configured along these lines:

Contradictory sources: total kill (one source) and drive out (another source)

Literal means: drive out by means of (literal) total kill

Along with critiquing the competing options, we argue that total kill and drive out are equally acceptable ways of achieving the same goal.

In ancient Israel’s understanding, the land was sacred space—Yahweh’s temple land, terra sancta—and the goal of Israel’s battles with the Canaanites was to create conditions for the exclusive worship of Yahweh in the land. This made the land as new Eden and sacred space (chapter three) the foundational issue and not necessarily killing every breathing Canaanite. If total-kill and drive-out instructions were both acceptable options for achieving the primary goal of restoring terra sancta, then this chapter provides yet another good piece of evidence for understanding total-kill language in a hyperbolic (not literal) sense.

On the First Option: too many of the total-kill texts combine with drive-out texts. Thus, Exodus 23:23,28:

On the Second Option, which means drive out by total kill.

The evidence shows no consistent drive-out-by-total-kill sequence in the Pentateuchal passages or in the Joshua-Judges texts where total-kill and drive-out actions are described together. Instead, we find variation in how driving out and total killing are to be accomplished. This variation prevents “drive out by (literal) total kill” from being the best description of how these actions relate to each other. We also see that the recounting of particular incidents does not establish that the rumor or fear of total-kill warfare drives the Canaanites out of the land. Finally, numerous passages show how the driving out of Canaanites could be described independently of any total-kill actions. These lines of evidence demonstrate that a thesis that the driving out is to bemeans of total killing takes cannot be sustained. 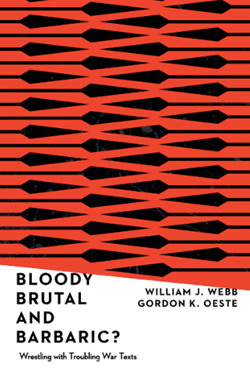 Hence, the Third Option: the goal of a sacred land drive this option. What is desired is a New Eden and sacred space for the dwelling of God’s people with a God who dwells with them. In fact, this reminds me of Zechariah’s Song (Benedictus) in Luke 2, where he desires a place where the people of God can worship God. For the total kill texts, then, expulsion or exile is the same as eradication. A good illustration is Deut 9:3:

Know then today that the LORD your God is the one who crosses over before you as a devouring fire; he will defeat them and subdue them before you, so that you may dispossess and destroy them quickly, as the LORD has promised you.

The goal then is three-fold:

You must demolish completely all the places where the nations whom you are about to dispossess served their gods, on the mountain heights, on the hills, and under every leafy tree. Break down their altars, smash their pillars, burn their sacred poles with fire, and hew down the idols of their gods, and thus blot out their name from their places. You shall not worship the LORD your God in such ways. But you shall seek the place that the LORD your God will choose out of all your tribes as his habitation to put his name there. You shall go there, bringing there your burnt offerings and your sacrifices, your tithes and your donations, your votive gifts, your freewill offerings, and the firstlings of your herds and flocks. And you shall eat there in the presence of the LORD your God, you and your households together, rejoicing in all the undertakings in which the LORD your God has blessed you.

In a sacred space

Thus, not only do Pentateuchal texts provide an understanding of Yahweh’s land as sacred space, but so also does the book of Joshua. In this context, descriptions of destruction or expulsion of the Canaanites in the book fall under the auspices of an ancient rationale for the actions of the Israelites, in which Israel’s battles are a means by which the land can be sanctified, preparing for the exclusive worship of Yahweh at his sanctuary within his sanctuary lands.

In a New Eden, here Genesis 2 shapes how much of the place of worship is to be understood.

Webb and Oeste, then, make a case that the focus is not genocide but creation of sacred space for the worship of God. With this stunningly significant conclusion:

If biblical authors understood Yahweh’s sacred space as the overriding goal, and driving out was an acceptable alternative to killing (both achieved the same goal), then the total-kill language ought to be understood as hyperbole. If one says, “Kill all of them!” and in the same breath, “Oh, yes, kick them out of the land; that is fine too!” it seems reasonable to infer that the “all” in the kill command is not literal.

Join the conversation on Facebook
Tags:
None
Posted:
March 24, 2020