The Manti Te'o Hoax, from the Perspective of a Football Fanatic's Wife

After falling for it, I realized deception is nothing new.
Lesley Miller, guest blogger 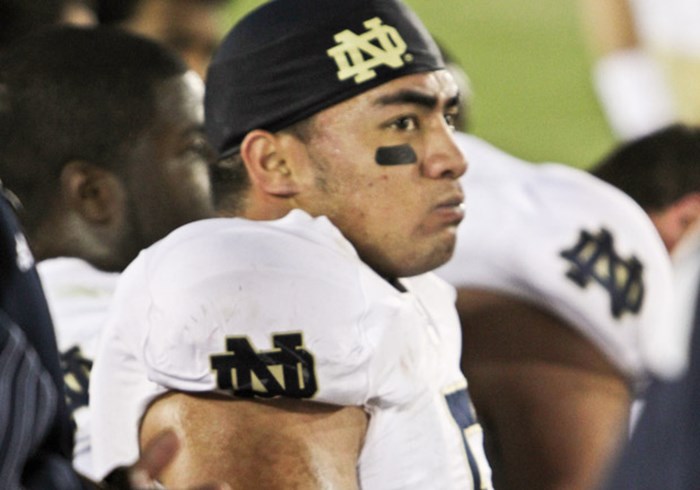 A few months into my marriage, I was faced with the biggest and only secret my husband's ever kept from me: the man watches a lot more football than I ever imagined. Since those days, I've accepted that football will be on most weekends from August through February every year. While I can't admit to enjoying the game much more than I did seven years ago, I've learned how to share some of his passion: I simply can't get enough of the tearjerker human-interest stories.

Last season, nothing was more inspiring than the story of Notre Dame linebacker Manti Te'o. In September, the football star lost both his grandmother and his girlfriend within 24 hours. Or at least, that's what he said.

So when Deadspin issued a scathing report this week alleging the girlfriend's death was a hoax, I – along with many other football fans (if you can call me that) — was shocked. The writers explain a web of fake Facebook, Twitter and Instagram accounts used as part of the fraud; yet, I still question how Te'o could logistically pull off such a lie. Worse, who in their right minds would think such public deception is acceptable?

For one, Lance Armstrong. The famous cyclist finally admitted to doping charges during a sit-down interview with Oprah Winfrey airing Thursday, though he has vehemently denied the accusations for years. In the interview he admits to doping as early as the mid-1990s and discusses the massive measures taken to cover-up his ...

The Manti Te'o Hoax, from the Perspective of a Football Fanatic's Wife

The Manti Te'o Hoax, from the Perspective of a ...