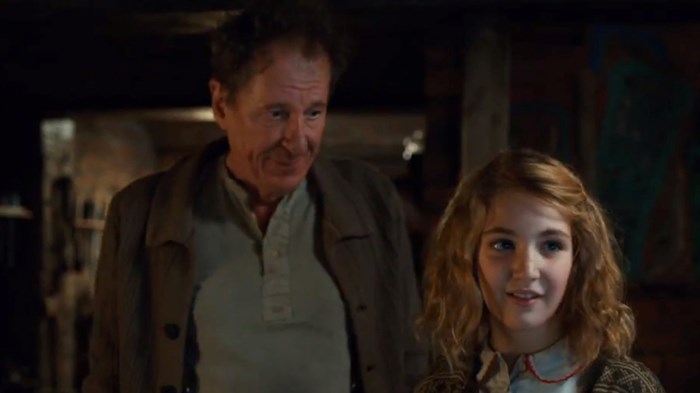 "I'm always finding humans at their best and their worst," concludes Death, narrator of the new film, The Book Thief, "I see their ugliness and their beauty, and I wonder how the same thing can be both."

"I am haunted by humans."

The Oscar-nominated film The Book Thief is indeed a haunting look at humanity, although an unexpected one for a World War II film.

The film opens in 1938 as a train barrels across Nazi Germany. Liesel Meminger and her brother are soon to be settled in a foster home. Liesel hums a lullaby, and next to her, her mother holds her younger brother's listless body. Suddenly, he is glassy-eyed. "Mama!"

"It's not what you call a soft opening, to meet this 10-year-old girl whose 6-year-old brother dies on page one," says Geoffrey Rush, who plays the role of Liesel's foster father, Hans Hubermann. "Then in the next scene, her mother's a Communist and gets taken away. I can't think of many films that start with a 10-year-old with a burden that's comparable to Hamlet's."

Death, both as voice and violent reality, opens and closes the film. Nevertheless, some critics have called the adaptation too safe and sanitized. "The brute facts of the Second World War in Germany—Nazi oppression, hunger, people hiding in basements—have been turned into a pleasantly meaningless tale of good-heartedness," writes Brian Denby of The New Yorker.