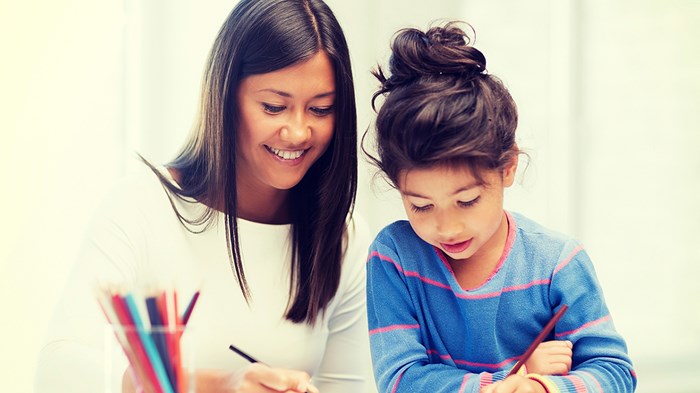 After two and a half years of being a stepmom, I still don’t always act—or feel—like one. When my husband and I got married, people congratulated us on our “instant family.” As a never-been-married single woman with no kids, I hadn’t planned for a happily ever after that began with three boys. But “just like that,” people would say, I was a mom! I got stamped with the mom label the moment I said, “I do,” but easing into parenthood—especially step-parenthood—takes time.

In The Smart Step-Family, Ron Deal points out that the process of merging two families into one doesn’t happen overnight. “Stepfamily integration hardly ever happens as quickly as adults want it to,” he writes. Some researchers suggest it takes anywhere from two to seven—seven!—years. And moving into the role of stepmother specifically, Deal says, may be one of the most challenging transitions of all. “Unguided by norms, role clarity, or realistic expectations, the stepmother works to ‘make up for the past’ experiences of the stepchildren, only to come to the awareness that she is overwhelmed, frustrated, and less committed to them than she believes she should be,” he writes.

Not all stepmoms adapt to their new role at the same pace, or struggle with the same issues. To get a broader picture of the process, I invited four other stepmoms to share their experiences. We spent time talking about one of the greatest challenges of stepmothering: it just takes time.

1. It Takes Time to Get Used to Being a Mother

Most of us expect to become parents by birthing our children one at a time and raising them from infanthood. Step-mothering, on the other hand, requires a crash course.

My husband and I dated for a few months before marriage, and during that time, I got to know the boys, observing their habits and personalities. But nothing prepared me for cooking their meals, helping them find missing jackets, and being responsible for many aspects of their daily lives—not to mention enforcing rules and shepherding their occasionally wandering hearts.

Getting used to the idea that I’m a parent has been the hardest part of adjusting as a stepmom. The boys already have a mom who loves them dearly. They spend half their days and nights with her, so I’m not the only mother figure in their lives. But the things I do for them are motherly. They come to me with their splinters and permission slips and questions about dinner. When they can’t figure out their homework, they ask me for help. When they get home from school, they want to tell me their stories. Me—their stepmom.

When Carol Boley, coauthor with Kathy Lipp of But I’m NOT a Wicked Stepmother!, became a stepmom, she had no children of her own, but Carol’s stepdaughter didn’t have a mom anymore. That changed how Carol thought about her role.

“I entered the marriage with the knowledge that I was now this child’s only living mother on earth, so thinking of myself as a mother helped the feelings develop,” she says. “And as I suspected would happen, the feelings of being a mother grew as I intentionally and prayerfully did motherly things with her and for her.”

2. It Takes Time to Develop Emotional Bonds and Trust

I’ve gotten along well with my stepsons from the first time we met. But to really become a family, we need to do more than just get along. They need to know they can trust me, and I need their respect. Then there’s this this thing called “love,” which goes a long way when tempers flare or dirty laundry gets left on the bathroom floor. But developing the bonds between parent and child in a stepfamily takes time, especially when the children are older or when both biological parents are still very much part of the kids’ lives.

Kathi Lipp became a stepmom to two teenagers while already having two teenagers of her own. She thought the main goal of being a stepmom was for her husband’s children to like her. But soon, she knew something else was needed.

“So often, I think we are waiting and praying to have the same kind of relationship that we would have with our own kids,” Kathi says in a recent interview. “With our own kids, we start with love and then move into having them respect us and our authority . . . . I tried that—thinking, of course, my stepkids will love me as many other people do! But with stepkids, the order is reversed. First comes respect, then comes relationship.”

Getting the order right gave Kathi the freedom and framework to really work on her relationship with her stepchildren. “Once I figured that out, I stopped the push and pull of ‘Will they like me more if I’m less strict? Will it take longer for them to love me if I make them pick up their clothes?’” she says. “We worked on respect first, and love eventually came.”

3. It Takes Time to Establish New Routines that Honor Both Families' Pasts

When I became a stepmom, I sold the only house I ever owned, moved to a new city, changed churches, and went from full-time to part-time work. Everything changed, from the meals I cooked to the time I spent commuting to the way I hung my towel after my shower. But I couldn’t just move in with my husband and his three boys and change everything for them too.

Before I could establish new routines that worked for all of us—or decide if we even needed new ones—I had to understand what the existing routines were. Every new process I established in our house meant a change for the boys, on top of the biggest change of having a woman living with them now. We had to move slowly.

Human resources professional and leadership consultant Jen Sandbulte had a similar experience. When she married her husband, Jen went from being single with only a dog to being the stepmother of two children. Not only did she have to change and adapt all of her own day-to-day activities, she also had to help her stepchildren adapt to the changes as well.

“Developing some routine and structure literally saved me!” Jen says. She recruited her teenage stepdaughter to help cook meals, and as often as possible, they ate together as a family and had devotions during the meal.

“Just the simple routine of engaging in a meal together and having conversation set the tone for communication at our house,” she adds.

4. It Takes Time to Help Everyone Else Develop Relationships with Each Other

Stepfamily life meant I also entered a relationship with an entire network of in-laws and step relatives—from my husband’s ex-wife (with whom we interact almost daily), to her mom and stepdad (who have graciously accepted me as family), to my husband’s dad and stepmom and extended family. My husband and the boys also are getting to know my family. Helping everyone involved get to know each other and feel comfortable being together for birthdays and other special occasions happens only with time.

About a year ago, I happened to be with the boys’ grandma—their mom’s mom—and she was trying to explain to someone how we know each other. “Okay, so my daughter used to be married to her husband,” Jeanne starts. We looked at each other and started giggling. “Never mind,” she says. “It’s complicated.” There aren’t adequate labels to describe all the relationships established when a stepfamily is created.

For Diane Bailey, author of 30 Days to a Better Step-Family, navigating the complex web of step-relationships begins by focusing on the right things. “Keep your eyes on God and on your marriage and children,” she advises. “Sometimes we just need to expect and accept that we cannot make everyone like us. So we just need to not waste energy trying to build bridges no one will ever cross. It takes a long time, but when they see that you are putting the children first, it can help create a relationship.”

Stepfamilies are born out of separation and loss—without divorce or death, there would be no stepfamilies. Though the stepfamily is created in an instant, it takes time for each member of the family to adjust and begin to feel whole again. In some ways, I feel like I am just beginning to understand what it takes to be the stepmom to three boys. And in other ways, I know I’ve come a long way.

Charity Singleton Craig is a freelance writer and editor, serving as a content/copy editor for The High Calling, a contributing writer for Tweetspeak Poetry, and a staff writer for Curator Magazine. She is the coauthor of On Being a Writer. Connect with her at CharitySingletonCraig.com or on Twitter at @CharitySCraig.