In the midst of relational uncertainty, this season invites me to savor God’s goodness.
Brianna Dewitt 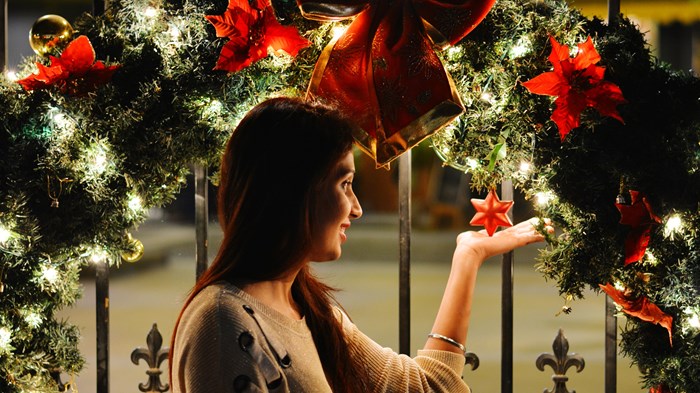 Scripture is filled with stories of people who waited. Hannah waited for an unspecified number of years before having her son Samuel. The Israelites waited 70 years in exile before being allowed to return to their homeland. The Jewish people waited hundreds of years for the promised Messiah.

During Advent, we are reminded of the significance and holiness of waiting. All of us carry hopes and desires for our lives: We’re waiting for a relationship to heal, for a wayward child to return to faith, for a baby to arrive in our arms. Some waiting is definite—it has an endpoint. We experience “definite waiting” when we anticipate outcomes that we know will eventually arrive, whether it’s a verdict on a new job, a grade on a final exam, or a wedding day. Although these experiences are often laced with frustrations and the outcomes mixed, the waiting will eventually come to an end.

Mary the mother of Jesus experienced definite waiting when the angel Gabriel announced that she would be “with child.” Although the process was undoubtedly difficult at times, she knew that in nine months, the promised child would put an end to her waiting. Even in her reply to the angel, we hear a level of certainty. “‘I am the Lord’s servant,’ she answered. ‘May your word to me be fulfilled’” (Luke 1:38).

Some waiting, however, is indefinite.

In my own life, indefinite waiting has come in the form of singleness. For years I’ve prayed to meet a godly man, not only because I desire the kind of love and companionship that marriage brings, but also because I’ve seen how good marriages can make each spouse better able to love, serve, and glorify God. My single years have been a period of waiting without a clear end point, without any promise of a “yes” or even a definitive “no.” At times, I’m filled with hope for the kind of man God may bring into my life and also for what God can do in and through my singleness, but there’s also a desperation mixed in with my hope that I wish I could be rid of.

In the midst of my relational uncertainty, I have read and reread the biblical story of Hannah. She prayed for children for years, saw her husband’s other wife bear children while her own womb remained empty, and then rejoiced when God eventually gave her a “yes” named Samuel. Many years passed between the paragraphs of her praying and the eventual baby. Even the way it’s phrased in the New International Version leaves the timing ambiguous: “So in the course of time Hannah became pregnant and gave birth to a son. She named him Samuel, saying, ‘Because I asked the Lord for him’” (1 Sam. 1:20). Although her desire eventually came to fruition, nonetheless, Hannah’s story is a reminder of God’s timing and how his plans don’t always match up with our own.

Stories like Mary’s and Hannah’s have known outcomes, but what happens to us—and to our faith—when ours do not? When we ask and ask of the Lord, and seemingly receive silence in reply? Hannah’s statement, “Because I asked the Lord for him,” is difficult to read at times, when our hopes feel unfulfilled.

It’s here in the undefined waiting and wandering that Advent challenges us the most. This season reminds us that God has not promised us every little or big desire of our heart—instead, he promised us himself. “We are no longer alone,” writes Dietrich Bonhoeffer, “God is with us. We are no longer homeless; a bit of the eternal home itself has moved unto us.”

This is one of the key tensions of the Christian faith—to believe God is good not despite our waiting, but in it, and perhaps even because of it. Whether we’ve been waiting for a day, a month, or 20 years, our hope dwells in him—the incarnate God with his mysterious three-in-one nature, the baby in the manger who was born for us and then died for us.

However, we don’t wait knowing that everything will turn out the way we want it to on this earth, because God does not promise us healing, houses, or husbands. Advent is a painful and necessary reminder that in ways both big and small, all is not yet right in our world. Bonhoeffer goes on to say, “Our whole life, however, is Advent—that is, a time of waiting for the ultimate, for the time when there will be a new heaven and a new earth.”

Advent challenges us to live in this tension between hope and waiting, brokenness and healing, all the while trusting that God is not withholding gifts from us out of cruelty but out of a love we may not be able to understand on this side of heaven.

As my singleness continues into the unknown future, I look to Jesus, the God who “became flesh and made his dwelling among us” (John 1:14). For all of us, single or married, the particularities of our waiting may be different, but the promises of God will always be the same.