In the midst of Nazi resistance, this Christian martyr offered three models for the season of waiting.
Elisabeth Rain Kincaid 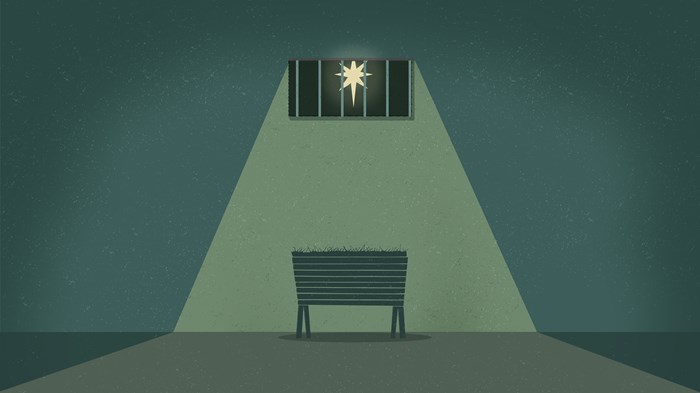 On November 21, 1943, Dietrich Bonhoeffer wrote a letter from Tegel Prison. “A prison cell like this is a good analogy for Advent,” he said. “One waits, hopes, does this or that—ultimately negligible things—the door is locked and can only be opened from the outside.”

The comparison between Advent and a prison cell may seem strange. It evokes powerlessness, perhaps even hopelessness. However, it is this particular type of waiting that Bonhoeffer believes best prepares us for Christ’s coming.

Although a Nazi prison gave him this metaphor, the sermons he wrote during his time of active ministry also present a similar vision of Advent waiting. In these sermons, Bonhoeffer sees the season before Christmas as a sharpened liturgical expression of the tension that informs our entire lives as Christians. Celebrating it prepares us to live as people who have made a radical break with the present world of sin and death and are also preparing for the redeemed future that God has already, in one sense, accomplished. Through Advent, we learn how to live in these two concurrent realities: We have already been delivered, and yet our deliverance is still to come.

Bonhoeffer’s Christmas and Advent sermons highlight three figures who exemplify life amid this tension and, by their example, might guide us through this season. Learning how to wait from these figures will not be warm and cozy but deep, dangerous, and shot through with sorrow and pain.

The first figure is Moses. This is not the triumphant Moses leading the people of Israel through a miraculously parted Red Sea or the lawgiver Moses carrying the stone tablets down the mountainside. Rather, the Advent Moses is the one found in Deuteronomy 32:48–52. Moses knows that God’s promise will be fulfilled, but he also knows that the promise will not be fulfilled in his lifetime. Instead, he will die on Mount Nebo, gazing across the river into the land. This Moses seems at first like the very antithesis of Advent, since he is the one for whom the promise is never fulfilled.

However, Bonhoeffer finds in Moses’ experience an expression of our own Advent waiting. Just like Moses, we know that the promise has been fulfilled—Jesus has come—but not yet completely. Through Moses’ punishment—his death before entering the Promised Land—we are also reminded that Advent is the season for death, judgment, and repentance. In a reversal of the world’s order, we pass from death into birth and new life. This awareness of our own death and judgment is crucial for us to understand that we only enter the Promised Land due to God’s victory, not our own. As Bonhoeffer puts it, “God is with us and we are no longer homeless. A piece of the eternal home is grafted onto to us.”

The second figure is Joseph. Like Moses, Joseph, in one sense, has seen the fulfillment of God’s promise. He trusts God and takes pregnant Mary as his wife. In response, God promises him the impossible: that Mary is “with child by the Holy Spirit” and the son she carries “will save his people from their sins” (Matt. 1:21). The child’s birth is accompanied by angels. However, despite the arrival of the promised Savior, the angel then commands Joseph to run back to Egypt, the land of his people’s slavery. So Joseph waits in Egypt. Even when God tells him to return, he doesn’t send him to Jerusalem, the land of promise, but rather to the most insignificant place in Judea—the town of Nazareth. As Bonhoeffer writes, “It was for Joseph as for all the world incomprehensible that the little-regarded Nazareth should be the destination for the savior of the world.”

Joseph’s entire life is marked by waiting, and it’s through his faithful waiting that God’s promises are more completely fulfilled. In coming out of Egypt, Jesus incorporates the liberation of God’s people into his own life and his own ultimate salvific rescue of all God’s people. Through his life among the poor, humble, and obscure in Nazareth, Jesus lives the life of all those who are humble and obscure, the life of all those, like his human father, who wait without ever knowing that God’s consummation comes.

The third figure is Mary. Bonhoeffer describes her as the person who “knows better than anyone what it means to wait for Christ.” As an individual, “she experiences in her own body that God does wonderful things with the children of men, that his ways are not our ways, that he cannot be predicted by men, or circumscribed by their reasons or ideas.” In this sense, she literally embodies a key theological tension: Pregnant with the Savior, she waits for his radical arrival but simultaneously feels deep within her own body how God’s promise has already been fulfilled.

Mary also exemplifies the corporate waiting of the church for the redemption of the people of God and the restoration of all of creation. In the Magnificat, she describes how the baby she bears will accomplish the overthrow of all systems of oppressive powers, the mighty taken down from their thrones and the poor and forgotten vindicated. Mary spends her life anticipating this redemptive conclusion. She waits through pregnancy, through Christ’s ministry, through the crucifixion, until Pentecost. Even after Pentecost, she still waits in the house of the apostle John, knowing that the culmination she foresaw—where all creation is made new—has yet to come.

These three “Advent” figures raise hard questions about the state of our hearts as we approach the season.

First, we have to acknowledge the radical break of Christ’s coming while also waiting within the “now.” However, we’re not free to bring about the completion of God’s promise on our own willpower or on our own timeline. In fact, we’re not even free to wait properly. Christ “is coming to rescue us from the prisons of our existence, from anxiety, from guilt, and from loneliness,” writes Bonhoeffer, but to be ready for this rescue, we first have to see how fully we are enslaved. (Here, his prison analogy returns to mind.) Advent, therefore, is defined by a double movement: first, knowing that we are still enslaved, and second, knowing that Christ has already set us free.

Secondly, whom are we waiting for? Jesus comes at Christmas as a child, but at the end of time, he comes in terror and might to dispense judgment. From Moses, we learn that Advent requires us to die first before we can be reborn. Accordingly, we can only welcome the child and come under his reign once we have accepted God’s judgment and, in a way, our own deaths. However, as we wait for judgment, we are also secure in the knowledge that we’re already taken up into God’s peace. We always see ourselves both “in the moment” and in Christ’s eschatological horizon. At Advent, then, it’s important to remember what it means to wait for a child, not just a King.

Finally, what do we do during this waiting? Bonhoeffer identifies Christians with the servants in Luke 12 who keep their lamps burning while waiting for the bridegroom. Because we know the bridegroom will come, our waiting is not passive or resigned. Rather, like Joseph and the servants, we learn to wait actively for God’s promises to be fulfilled.

We also learn how to live out the radical freedom that comes from God’s promise already being fulfilled. Most fundamentally, we are set free from captivity within ourselves. This freedom, says Bonhoeffer, releases us from “thinking only of [ourselves], from being the center of my world, from hate, by which I despise God’s creation. It means to be for the other: the persons for others. Only God’s truth can enable me to see the other as he really is.”

Bonhoeffer lived out this Advent waiting in his own prison cell. Although the door was locked and his life was collapsed in rubble around him, he still clung to the knowledge of his freedom in Christ, and he did so through the practice of Advent. In a letter sent to his parents, he described how an Altdorfer Nativity scene “in which one sees the holy family with the manger amidst the rubble of collapsed house … is particularly timely.” Amid the upending of the world, the fear of death, and the knowledge of our own failings and captivity, “even here one can and ought to celebrate Christmas.”

Elisabeth Rain Kincaid is an assistant professor of moral theology at the Aquinas Institute of Theology. Her research focuses on questions of moral formation, the development of virtue, and the intersection of law, business, and theology.