Why the supernatural events of this season are both credible and incredible.
Rebecca McLaughlin 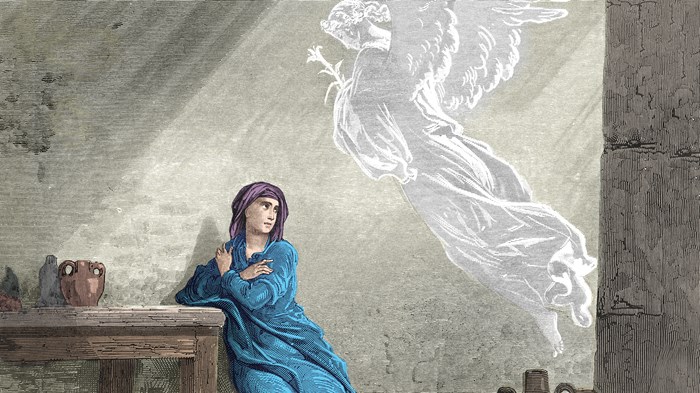 I’d just read my four-year-old the story of the angel Gabriel meeting with Mary. I tried not to panic.

“Well, do you believe that God made you?”

“And do you believe that Jesus died for your sins?”

“And that he rose from the dead?”

After more gentle probing, it turned out it was really just the angel that she didn’t buy. But nonetheless, my daughter isn’t alone in her natural skepticism about the supernatural. When we stop to think about it, Christmas stretches our credulity. It comes complete with an angel appearing, a virgin conceiving, a star guiding, and heavenly hosts singing. How can rational, scientifically literate, 21st-century people like us believe such things, when even a child finds them hard to take?

Here are four reasons to believe in Christmas in all its supernatural glory.

If you’re familiar with the Bible, you’re familiar with an a fortiori or “how much more” argument that draws secondary conclusions from a greater first point. For instance, Paul reassures the Christians in Rome of God’s care by saying this: “He who did not spare his own Son but gave him up for us all—how will he not also, along with him, graciously give us all things?” (Rom. 8:32). Paul argues from the greater thing to the lesser. If God gave up Jesus for the sake of believers, surely nothing else will be too hard for him to give!

By similar argumentation, to believe in the God of the Bible who created the universe and not to believe in miracles is rather obtuse. It would be like my daughters believing their dad could make bread from scratch (which he can) but that he couldn’t toast a Pop-Tart. In fact, if you are a Christian (or a Jew or a Muslim, for that matter) you are already signed up to believe that the universe and everyone in it is God’s handiwork.

At one level, the miraculous conception of a human baby is but a drop in the ocean. What’s incredible about the Incarnation is not so much that a virgin conceived (remarkable though that might be) but that God became man. “What is truly amazing about the Christian faith,” says the physicist Jonathan Feng, “is the idea that God made the universe—from quarks to galaxies—but at the same time cared enough about us to be born as a human being, to come down, to die and be crucified in the person of Jesus, and to bring forgiveness and new life to broken people.”

2. Miracles aren’t ruled out by science.

In his excellent new book, Can a Scientist Believe in Miracles? MIT professor Ian Hutchinson observes that “We tend to view God as mostly hands-off, standing on the sidelines, letting nature look after itself, but then on rare occasions reaching in to tweak things by the odd miracle here and there.”

But this, Hutchinson points out, is not the biblical view. The Bible reveals Jesus as the Word through whom all things were made (John 1:1, 3) and by whom all things are sustained (Heb. 1:3). Rather than standing on the sidelines, therefore,

[God] continuously hold the universe in the palm of his hand…It exists because of his continuous creative power and will: If he were to stop exerting that upholding power, stop paying attention to every part of the universe, it would instantly cease to exist.

In line with Christian philosophers like Alvin Plantinga, Hutchinson suggests we should not see miracles as God intervening in the natural order of things. The regular order of things that we explore through science is utterly dependent on his will. A miracle, therefore, is “an extraordinary act of God” by which God “upholds a part of the universe in a manner different from the normal.” Thus, the extraordinary acts of God that we celebrate at Christmas should not cause doubt for the scientifically minded. As Princeton philosopher of science Hans Halvorson points out, the modern scientific method was first developed by Christians precisely because they believed the biblical revelation of a Creator God.

It’s a common misconception that the gospel accounts of Jesus’ life were written down so long after the events they record that the figure they describe has been mythologized. The story goes like this: Jesus started as a great preacher with some groundbreaking ethical ideas, but over the years, exaggerated claims crept in. A virgin birth here, a resurrection there, and voila! the prophet of Nazareth becomes the Son of God.

But in his powerful new book, Can We Trust the Gospels? New Testament scholar Peter Williams argues that there simply wasn’t time for Jesus to be mythologized. The gospels were written when eyewitnesses of Jesus’ life were still around. They include a wealth of geographical and cultural detail about the precise area in which he lived—details that would not have been available to remote authors fabricating stories. And in the rapid spread of Christianity, the accounts of his life traveled so far and fast and with such remarkable consistency that there would have been no opportunity for later editors to add miraculous claims. Moreover, as Williams reminds us, we have more and better manuscript evidence for the life and works of Jesus than for those of Tiberius, the Roman emperor who ruled during his ministry.

In other words: We can disbelieve the claims about Christmas if we choose. But let’s not do so on the weak premise that they were made up hundreds of years after Jesus’ actual birth.

4. Forgiveness is the greater miracle.

My daughter was willing to believe that Jesus died for her sins but unwilling to believe that God could send an angel to tell Mary about the Virgin Birth. Forgivable though it is, her disbelief betrays a lack of understanding for what is truly remarkable. How often do we find ourselves making the same mistake? “Sure, Jesus can forgive my sins,” we think, “but could he really walk on water?”

When we read the gospels, however, this hierarchy of the unbelievable gets flipped on its head.

In one of my favorite gospel moments, Jesus is confronted with a paralyzed man. His friends have gone to great lengths to get him in front of the healer, and his physical need is obvious. But the first words out of Jesus’ mouth are, “Son, your sins are forgiven” (Mark 2:5). The crowd must have been confused by his response. The paralyzed man had come to Jesus for healing, not forgiveness. But Jesus saw a greater need and one that was far harder to meet. Healing this paralytic’s legs would cost Jesus a few words. Purchasing his forgiveness would cost Jesus his life.

This Christmas, when you’re tempted to wonder if the Virgin Birth and the singing angels could be historically true, remind yourself how much more incredible it is that the eternal Son of God became a baby for our sakes and that the sinless Savior suffered for our sin. That’s what’s truly unbelievable about Christmas.

Rebecca McLaughlin holds a PhD from Cambridge University as well as a theology degree from Oak Hill Seminary. Her first book, Confronting Christianity: 12 Hard Questions for the World's Largest Worldview, will be published by Crossway in 2019. Follow her on Twitter or at rebeccamclaughlin.org.