Christian history gives us reason to see Advent and Christmas as coexistent, not separate.
Courtney Ellis 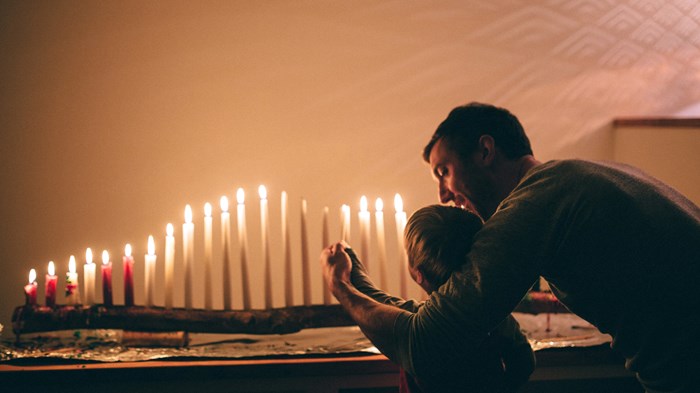 “Don’t rush Christmas,” a seminary professor once told me sternly.

Divinity school faculty often press pastors-in-training to hold off on Christmas celebrations until the eve of the big day, relying on a handful of Advent songs to get through the bulk of December and leaving tree-trimming for the very end of December. High churchgoers, from Anglicans to Presbyterians, cringe when the local mall blasts Bing Crosby the day after Halloween. “Advent is a season, too, distinct from Christmas,” we crow. “Must our culture hurry everything?”

The season of Advent marks a time of holy longing and anticipation. It opens space for sitting with the stories of Elizabeth, Zechariah, and John the Baptist, of Mary, Joseph, the angel Gabriel, and the long journey to Bethlehem. Its liturgical color, purple, is the same as Lent and links the two seasons together as similar spaces in which God’s people mourn the brokenness of the world and also participate in the sacred hope that Christ has come and will come again. To celebrate Advent is to make space for vitally important Christian practices: stillness, silence, and longing.

Yet here’s the rub—cultural Christmas starts early. As in, early early. Our local Costco had artificial Christmas trees on sale by mid-October this year. Schools and churches and community centers begin offering Christmas programs, concerts, and events before Thanksgiving turkeys have cooled. If the church holds off on the celebration of Christmas until December 24, we risk ending up so world-weary from cultural Christmas that we never properly celebrate the holier elements of the season.

The more persuasive argument, however, is that the theological practices of Advent and Christmas are not mutually exclusive. Keeping them rigorously separated might be less an exercise in Christian waiting than it is in unnecessary legalism. Why not overlap the two—celebration and anticipation—and commemorate the birth of Christ while awaiting his return?

A blended season may be truer to the spiritual practices we’re trying to sow the rest of the year for the simple reason that Jesus has been born but we are, in fact, waiting for him to come again. When we hold off until Christmas to celebrate the nativity of Christ, the advent of his second coming gets pushed to the margins, often a second thought at best and entirely forgotten at worst. Advent’s purpose is to remind us of these two separate but equally impactful events, and thus celebrating one (the birth of Christ) earlier leaves space to more faithfully and fully remember the other.

The arguments for strict Advent-keeping are often drawn from Christian history and tradition, and yet a close study of the holiday’s history shows us a less linear map for how Advent and Christmas should be celebrated. Christian traditions surrounding Christmastide have evolved over time, with the earliest records of festivities showing up around the fourth century. (Prior to that, Christians celebrated Easter and Pentecost, but a feast connected to the birth of Christ is absent from the writings of our earliest church fathers and mothers.)

In the Middle Ages, European children were given gifts on December 6 in honor of Saint Nicholas, a tradition that some still practice today. It was only as the Reformation started in the 1500s that the date of Christmas gift-giving began shifting to December 24, distinguishing Protestant celebrations of the holiday from Catholic ones.

Even today, if we take our cues from the global church, the liturgical Christmas season is far from straightforward. The Catholic church traditionally practices the longest celebration, continuing Christmastide through February 2 with the feast of Candlemas, which commemorates the presentation of Jesus in the Temple. Most Eastern churches celebrate the birth of Jesus on January 7. Liturgical Protestant communities commonly celebrate Advent the four weeks leading up to Christmas Eve and then the Christmas season following, ending with Epiphany on January 6. Nondenominational and lower-church congregations vary widely in how they celebrate, from hanging greens before Thanksgiving to holding off on Christmas celebrations until the big day itself.

When we look to key figures from Christian history, we find that some of our greatest theologians and writers have argued—directly or indirectly—for an early Christmas. In the fourth century, for example, Saint Augustine preached a Christmas sermon on Jesus being “Born of the Father without the limits of time.” Meister Eckhart later paraphrased this idea by saying, “the birth of Christ is always happening.”

In 1629, John Milton penned a poem titled “On the Morning of Christ’s Nativity,” reminding his audience that the birth of Christ had cosmic implications and needn’t be limited to one particular season of the year:

For if such holy song
Enwrap our fancy long,
Time will run back and fetch the age of gold,
And speckl'd Vanity
Will sicken soon and die,
And leprous Sin will melt from earthly mould;
And Hell itself will pass away,
And leave her dolorous mansions to the peering Day.

In the same century, poet John Donne proclaimed in “The Showing Forth of Christ” that Jesus’ “birth and death were but one continual act, and his Christmas Day and his Good Friday are but the evening and morning of the same day. … Every manifestation of Christ to the world, to the Church, to a particular soul, is an Epiphany, a Christmas day.”

Clearly, the diversity of practice that we find in Christian history and contemporary Christendom should give us room to approach the holiday season with an open spirit. There is no “right” date to begin celebrating these holy seasons, as many a Twitter curmudgeon would have us believe.

What are the benefits of blending Advent and Christmas?

First, it allows the church to unfetter some of our most theologically rich songs before Christmas Eve. From “O Holy Night” to “I Heard the Bells on Christmas Day,” Christmas songs turn our hearts to the plight of the oppressed and remind us of the hope for peace found only in Jesus.

An early Christmas also invites us to embrace gift-giving as an analogy of the ultimate gift God gave to us in his son, Jesus. As it is written in 1 John, “This is how God showed his love among us: He sent his one and only Son into the world that we might live through him” (1 John 4:9). The Incarnation tips us off to the unbridled generosity of a God who comes to live among his people. It also reminds us anew that our posture before him is first that of a receiver.

Finally, the holy waiting of Advent combined with the unfettered celebration of Christmas helps us behold the sacred complexity of this season. We’re invited to light candles in the darkness, to proclaim hope through the silence, and to embrace peace amidst the violence of a world in desperate need of a Savior. As Philip Yancey puts it in The Jesus I Never Knew, “Often a work of God comes with two edges, great joy and great pain.” In both Advent and Christmas, Christians are invited to embrace the "already, not yet" of the human experience—the reality that Christ has come, is come, and will come again.

You may not want to blast Burl Ives from the stereo in June like I do. But go ahead and decorate that tree today if you want. It might give pleasure to your family, your neighbors, and your friends. More than that, it’ll remind you that we celebrate Christ’s coming—and anticipate his second coming—all year long.

Courtney Ellis is a pastor, speaker, and author of the forthcoming Uncluttered: Free Your Space, Free Your Schedule, Free Your Soul (Feb. 2019, Rose Publishing). She lives in Southern California with her husband, Daryl, and their three kids. Find her on Twitter, Facebook, or her blog.