Disability changed our family. It also brought us closer to these three Christian truths.
Rachel Gilson 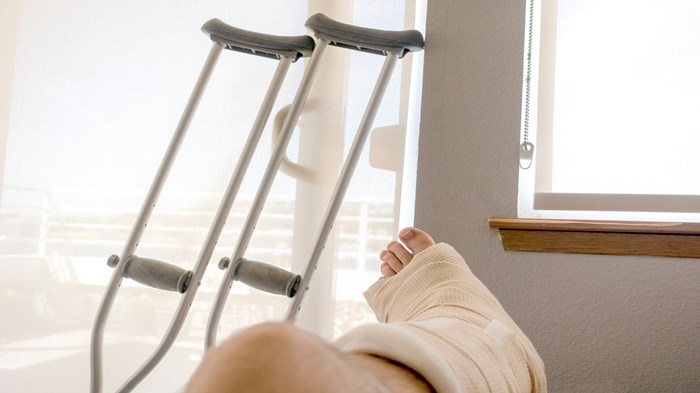 My husband Andrew’s foot ailments have given me a curious window into the Christian life.

Before he and I were dating, his first swelling incident was misdiagnosed by a college nurse, and we only discovered the mistake when it happened again five years later. Both seemed like freak incidents. Then in 2012, on a summer mission trip in the Middle East, his left foot swelled up and left him on the couch for the remainder of the trip. Much of his life since has been progressively couch-bound.

Every contradictory explanation added to the pain. How do you treat something that you can’t pin down? In 2013—around the same time that we found out we were pregnant—we discovered that one of the bones in Andrew’s feet had broken so many times that it had died. I didn’t even know bones could die. It would have to be removed, lest his body begin to eat it away, clearing itself of the decay.

Andrew doesn’t have an interesting injury story—he didn’t kick down a door to save a child or get into a fantastic sports accident. His feet are simply shaped all wrong for bearing weight, and it took two decades for that harvest to reap its fruit. Looking at him, one would never guess his body is so structurally unsound or that he’s had four foot surgeries in five years.

Even though his disability is often invisible to others, his vulnerability has dramatically changed our family life. Our daughter has always known her dad with some kind of “boo boo.” Sometimes she knows what’s going on because he has a giant pink cast on his foot that is highly visible. Other times his pain is hidden. He can’t play with her outside, even though he can walk around the house without crutches. The invisible danger of further injury always crouches nearby.

At the beginning of our life together, I was waiting for Andrew’s body to be normal again. After we did this procedure or got those orthotics, we’d have our life back, I thought. I was pragmatic, optimistic, even blasé. But years of doing one thing after another finally shook me by the shoulders: This constantly vulnerable state was here to stay. So were all the emotions that went with it. Realizing this caused me to enter into them truly for perhaps the first time.

Andrew and I would never have asked for his ailments, and we often pray for God to heal them. Nonetheless, living with them has brought many hard-won lessons that illustrate how we’re called to live as Christians in the world.

First, we live with constant awareness.

When I had strep throat in high school, I became painfully aware of how often a human needs to swallow. But as soon as it passed, I rarely thought about that vital function again. Similarly, in the life of faith, a crisis often brings some spiritual reality close and creates urgency where there was none. We are driven to vigilant prayer, scriptural study, Communion, even to fasting. The experience can be poignant, but oftentimes when the storm is over, our diligence and discipline also come to an end.

With Andrew’s long-term injuries, we have gained a mindset of constant awareness, which can be exhausting. Even when nothing is acutely wrong, we think about his body many times a day and speak about it just as often. Is there any progress? Is anything particularly weak or strong today?

In the same way, although much of our Christian life is an invisible reality, it should be constantly in our mind’s eye, because it is reality still. There is nothing about my body that necessarily shows I am risen with Christ, yet my union with him is even more real than my weight upon a chair. Accordingly, Paul urges us to set our minds on things that are above (Col. 3:1–2) and to think about it daily. Is there any progress in my faith? Is there anything particularly weak or strong today?

Awareness without action is foolish. We stay aware of Andrew’s long-term ailments so that we can act purposefully and wisely. Every day, he wears high compression socks. Every day, he intentionally limits his time on his feet. Every day, he treads as lightly as possible.

In the same way, our awareness of being united to Christ produces constant action. Every day, we pray and read our Bible. Every day, we seek the encouragement and correction of fellowship with brothers and sisters in Christ. Every day, we strive for grace-fueled obedience and limit our exposure to situations that tempt us to evil.

Actions are also more than everyday habits; sometimes unique circumstances call for unique choices. For example, if Andrew is having a good day with his feet, he may play with our daughter outside. But we’ll make sure that he ices his surgery wounds before and after. If he’s having a bad day, we’ll dramatically minimize his movements and in doing so have to say “no” to what might otherwise be good, healthy experiences.

Just so with our faith. If we’re having a good day—our faith is strong, our desire to draw near to God is high—we act accordingly. Perhaps we’re more boisterous during worship or quick to share the gospel with a neighbor. But we also have bad days, too. If despair clouds our spirit or we lose a battle against temptation, we may ask for prayer or read helpful verses to reframe our hearts and minds. These carefully calibrated actions are the mark of a Christian.

Finally, we live in constant anticipation.

The comparison between long-term ambiguous disability and our status as Christians may feel slightly mismatched. The first is unfortunate, a result of the fall. The second is a profound reversal of that fall, a great source of joy.

Yet we live on this side of heaven and can only see the beginning of Christ’s work—what is often referred to as the “already/not yet” of the Christian life. The Bible repeatedly encourages us to look to the future of Christ’s second coming, which should produce eager waiting. But unfortunately, the crush of the “not yet” can cause the “already” to lie limp in our hands.

For our family, that means we’ve cried thousands of tears because of the losses wrought by Andrew’s ailments—the many bottles of pain-killers taken, the many medical bills to pay, the many lost opportunities. Our daughter has made innumerable requests of her father that Andrew’s body forces him to deny. In other words, for all our awareness and action, we can’t take away the reality of his injury.

However, we know that God is bringing us to a new and better home, free from sin and free from pain. If Andrew’s ailments have brought us anything, then, it has been the joy of longing for this future home and eagerly waiting for it. Chronic illness has made the promise of our own resurrection very sweet for us, and we look forward to the day when Andrew will one day walk in a resurrected body with new and steady feet.

As Paul writes in Corinthians, “Listen, I tell you a mystery: We will not all sleep, but we will all be changed—in a flash, in the twinkling of an eye, at the last trumpet. For the trumpet will sound, and the dead will be raised imperishable, and we will be changed. For the perishable must clothe itself with the imperishable, and the mortal with immortality” (1 Cor. 15:51–53).

Resurrection life is so much more than a new body—but it is certainly not less. We will rejoice in the presence of our Maker, completely remade.

That’s something worth waiting for.

Rachel Gilson is director of theological development at Cru Northeast. She blogs at rachelgilson.com and can be found on Twitter @RachelGilson.

Join the conversation on Facebook
Tags:
DisabilityDiseaseHeavenHopeMarriageSuffering and Problem of Pain
Posted:October 16, 2018