How I’m learning to name both the injustice and goodness of my childhood in the South.
Amy Julia Becker 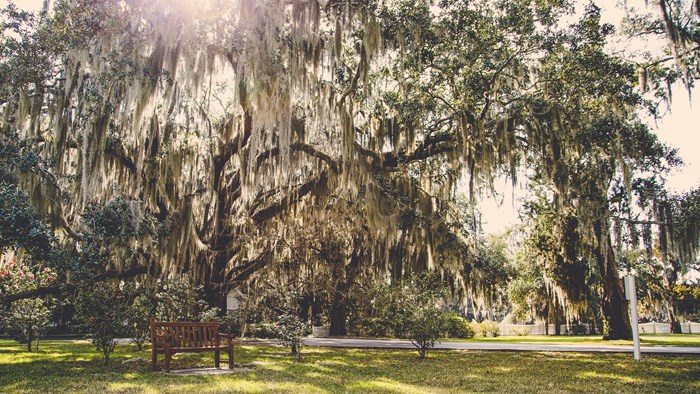 When I was a girl, sometimes it rained so hard and long that our backyard flooded. Our house sat a few feet above sea level, a block away from the inlets of the North Carolina coast. When the rains came, there was always a chance that the drainpipes would overflow, spill across the roadways, and fill the bottom of the yard with enough water to reach our waists.

We had no fear. No thoughts of snakes or disease or objects dislodged by the current menacing our bare bodies with their sharp edges. We knew the Sunday school story of the Flood as one of triumph and hope—animals, a rainbow, salvation. We didn’t learn about the waters of judgment. We stripped down to our underwear to wade through the murky pool and never considered the destruction that primordial storm had left in its wake.

I now look back on my childhood and see a similar mix of innocence and ignorance.

In our part of town, the houses were spacious, even grand, with wraparound porches, wide-planked wooden floors, and pecan trees shading the backyards. We lived within walking distance of the local plantation. Across an old wooden bridge and a road through the woods stood an imposing three-story white manor house. Past the house, cottages lined the dirt road, with clothes hanging out to dry. We sometimes drove down that road on our way to the country club. I stared out the window of our minivan from behind tinted glass and saw African American tenants sitting in rocking chairs on the front porches. The air was hazy and thick with heat, like a shimmering wall between us.

A woman named Caroline took care of my three sisters and me a few days each week. She was short and had light brown skin, a round face, and sparkling eyes. She wore a white dress and white shoes, like a nurse. There was also Vera, who helped with cleaning while Kate and I were at school. And there was Samuel, who saw to the lawn and any odd jobs my mother needed. He whistled while he worked, and every so often he would swoop me onto his shoulders, and I would rest my chin on his head, taking in the scent of tobacco, cut grass, and sunlight.

Vera and Samuel and Caroline reinforced the stability offered by my parents, as did the rest of the neighborhood—the other families with young children, the old ladies who lived on our block. In the afternoon, I would make the rounds to Virginia Hayes, who kept ginger cookies on hand in case one of us came to visit, to Miss Betty Applebee, with her unmarried status built into her name, who invited me to come in and play her piano, and to Elizabeth Sumner, with her flower garden and her little fountain and her white hair swept up into a soft bun. I was always welcome. Always safe. Always listened to. Always loved. Those were my good old days.

I look back on my childhood with fondness, with nostalgia, but also with a creeping uncertainty about how good it really was. It took me decades to see that the portrait of goodness in my memory involved only a small portion of the population and that it limited and constrained as much, if not more, than it offered. It dictated the boundaries of my relationships. It cut me off from hardship—both the hardship of engaging human suffering and the more mundane hardship of discomfort or even deprivation.

Beyond the ways my own life was limited by those boundaries, the goodness of my childhood was built upon the poverty of others. I was running around outside while my mother sat on the green and chatted with friends because Samuel and Vera and Caroline were cleaning and mowing the lawn for $2.50 an hour. That said, had my parents not employed local African Americans like these three, they would have effectively denied them the only work an unjust educational system had prepared them to do.

I loved Samuel and Vera and Caroline, but I never stopped to think what their lives might have been like if they had grown up in a different place or at a different time or with a different set of social expectations. Samuel’s stories of the Great Depression fascinated me—with only eggs to feed their family, no salt, no butter, no milk—but I didn’t stop to reflect on the sorrow that lay behind those memories until I was much older. I wondered about the equity of a world where Caroline lived in a tiny house on the outskirts of town while we lived in a big house in the center, but I couldn’t see another way to live.

Years after we had moved north and Caroline had retired, she called my father. She asked if he would send her some money so she could buy a prescription pair of glasses. He said, “Of course, but why?” She wanted to learn how to read, she said. She had stopped going to school when she was six because her mama hadn’t thought it was safe.

At first I heard that story as beautiful, a testimony to Caroline’s perseverance and creativity, to my father’s generosity, to the years of trust and respect built up between them. But then it struck me, like a blow to my windpipe. How many years had that longing gone unfulfilled? And how many of those years were spent with me nearby, curled up in a chair with a book?

I have replayed Caroline’s question for my father about the reading glasses again and again, wondering whether it wasn’t an act of trust and respect but of defeat, returning years later to a white man to ask for money to learn a skill that should have been offered to her decades before. If my childhood depended upon this imbalance, is it possible to label it “good”?

And when I allow that question, that confession, the admission that something wonderful to me was connected inextricably to the deprivation of someone I love, I no longer want to return to the past. My friend Sonja once told me that “the good old days” sounded like code for exclusion to her, an African American woman from Louisiana. Those words had always sounded like nostalgia for something beautiful until I started to see my childhood through a different lens.

There are two ways of seeing my childhood town—as a segregated backwater or as a bucolic landscape filled with flawed but generous people. There are two ways to see my parents—as a couple who ignored conflict and repressed emotion or as a source of love and grace and provision. There are two ways of seeing my heritage writ large as a white American—as a people who perpetrated years of unjust oppression of native peoples and African Americans and immigrants or as the founders of modern society with its celebration of liberty and justice for all.

I have always thought I had to choose. If I am grateful for my town, my family, my history, then I must not critique it. And if I name the ugliness inside that history, I forfeit the right to be grateful. I am starting to believe that both must be true, that I can hate the injustice and name the goodness of my life, that I can recognize my parents’ flaws and thank them for their gifts to me, that I can stand in the discomfort of the grief and gratitude of who I am as a child of privilege.

In Sunday school as a child, I learned the story of the Flood in Genesis through a fun song about Noah and exotic animals. We colored pairs of lions and giraffes and elephants. We played with wooden figures of the ark and its inhabitants. We cut out rainbows—the sign of God’s covenant after the waters receded, the sign of hope. When I later read Genesis as an adult, I realized the horror implicit within the story. The violence upon the earth was so great that God decided to reverse the initial act of creation. What had been created good had gone so bad that God decided to wipe it out—the animals, the plants, the human beings. Only Noah, his family, and a select group of creatures rode out the storm. The rest of humanity and creation drowned.

When I understood the scope of the story of Noah’s ark, it scared me, both because I did not want it to be true, and because I feared the truth it contained. I wanted to turn away from a world with such depths of evil. I wanted to turn away from a God with such capacity for destruction. I wanted to return to the children’s song, the construction-paper animals, and the caricatured, sanitized happiness. And when I look back on my childhood, I want to ignore the sorrow, the injustice, and the pain that I now can see beneath the beauty.

In the Bible, after the Flood, slowly, hope arrives. God acknowledges that the human heart will always bend toward evil, and then God promises never again to curse the ground or to destroy the living creatures. In a literal translation, God sets his “war bow” in the clouds. He lays down his weapon of destruction, and it becomes instead a rainbow.

That rainbow in the clouds comes not as the bright and cheery endnote of a happy-clappy religious message. It comes as a symbol of both power and vulnerability, of a God who hates violence and injustice and yet refuses to give up on human beings. The rainbow is a symbol of love, yes, but love that comes through sacrifice.

When I look at the “good old days” of my childhood, I need to acknowledge the injustice alongside the goodness, to wrestle with the past rather than glorify it. I want to return to the wonder of a flooded backyard. Instead, I return to the mournful story of a flooded creation and the tenuous promise of a bow of light stretched across the sky.

Amy Julia Becker is the author of four books, including White Picket Fences: Turning Toward Love in a World Divided by Privilege. She lives in western Connecticut with her husband and three children.

This essay was adapted from White Picket Fences with permission from NavPress. The book is a NavPress resource published in alliance with Tyndale House Publishers, Inc.