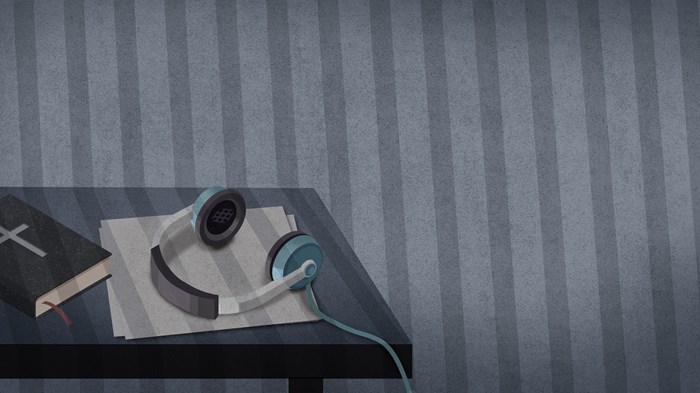 For years, author, speaker, and Bible teacher Ann White felt a burden to help at-risk women come to know the love of Jesus. Through her work in local American prisons as well as low-income communities in Southeast Asia, White saw a deep need for greater accessibility to Scripture.

As the founder of Courage for Life, an organization dedicated to “strengthen, equip, and empower the world for Christ,” White’s passion to share the good news of Jesus led her to take on a project that’s time had finally come: an all-female-voiced audio recording of Scripture.

The Courage for Life (CFL) Bible is the first audio version of the Word recorded with multiple women’s voices. It features a diverse group of female voice actors reading the New Living Translation. While the New Testament portion launched this year, White is currently fundraising to help finish recording the Old Testament. She spoke with CT about why the female-voiced Bible speaks to both sexes and how CFL plans to reach inmates across the country.

My first thought when hearing about your project was, “This is so long overdue!” Part of me couldn’t believe this hadn’t been done already.

That was my first thought!

Why did you choose to record the New Living Translation, in particular?

In working with local missions in our own backyard, whether it’s women in homeless shelters, battered women’s shelters, safe houses, or incarcerated women, their reading levels are very low. We chose the New Living Translation because it’s a great translation for the women we work with. Even when you take a printed book to someone who doesn’t read a lot or struggles to read, they’re really intimidated by the Bible.

In working with at-risk women, we know through research and our own experience that you want to use gender-specific treatment. You don’t have a man go in and work with a woman who has been victimized by a man. We thought the same thing could be true for teaching the Bible to a woman with past trauma. She can better hear Scripture from a woman’s voice.

So my first thought was, let’s find a women’s audio Bible and make it available. We started looking, and we couldn’t find one. We thought, “What in the world, why hasn’t this been done? Lord, are you calling us to do this?”

So we began fundraising, and our generous donors came alongside us and helped us get the New Testament done in less than a year. That was amazing. We had 12 professional voiceover actresses from Burbank, California. Our producer is a two-time Grammy-nominated recording artist and an incredibly godly man, and he auditioned close to 80 women before he chose 12 of them. We wanted different age groups and ethnic backgrounds.

These gals have just been on fire about this project—they’re chomping at the bit to get it done. We’re currently adding eight books of the Old Testament to the Bible app. That’ll be done in the next couple of weeks. The New Testament is already up. It’s being picked up all over the world, which is even more than I could have hoped for or dreamed of.

There are a certain number of states that are issuing tablets to inmates in order to give them positive content to combat the negative content in their lives. The prisons make certain things available, and then the inmates can choose what they’d like. There’s educational content there or music, and then, of course, the audio Bible. It takes time to go through all the hoops, but it looks like we’ll soon be up and running in one state—where there are roughly 50,000 inmates, both men and women—and there’s also another state waiting. We’ll also be partnering with Megavoice to put it on audio players that can also go into prisons.

Have you seen your ministry impact men, as well?

That was another thing that surprised me. One of our partners was in a couple of men’s prisons and was asking some of the male inmates, “You know, would you want to have an audio Bible available on your tablet?”

“Yeah, that would be great,” they said.

He asked, “Would you want it in a male or female voice?” Unanimously, they said “female voice.”

And that was interesting to us. A large percentage of incarcerated men come from broken homes, fatherless homes, or they were abused by men in their life. So quite often, if anyone shared the Lord with them, it was a woman—their grandmother, their mom, or their aunt. So they’re excited to hear the Word of God in a woman’s voice.

Advertisers say that if you want to please 92 percent of the population in an ad, use a woman’s voice. So for various reasons, the female voice is preferred, and God has given us the privilege, the opportunity, and the resources to get this project done.

Have you heard any feedback from your listeners?

In the recording studio, our voiceover actresses and even our producers were often brought to tears from even reading God’s Word. There’s an emotional attachment that happens when you spend that much time with Scripture. You begin to really understand how God relates to the precious creation that he loves so deeply. That emotion begins to stir. Similarly with our listeners, we’ve heard back that this audio Bible has really provided them not only with the opportunity but a desire to be in God’s Word more often.

Conversely, have you faced any pushback to this project?

No, I have not had any pushback. I’m a Southern Baptist at heart, and we’re members of a Southern Baptist community, so I understand what you’re talking about. But even in asking my pastor, “Do you see any reason why anyone would have any objections to hearing God’s Word in a female voice?” he was like, “Absolutely not.” I have had nothing but encouragement, and I guess that’s by God’s grace and his protection.

I know without a shadow of a doubt that this is what he’s called us to do. Even knowing it’d be a half-a-million-dollar project, I never turned back.

Each book of the Bible has a special introduction. Is that your voice?

It is! I’m a teacher at heart. I loved recording the introductions and then the challenges at the end of each book. I want listeners to understand—this is who wrote this, this is who his audience was, this is the context of what was going on. So the who, what, where, when, and why questions. And then the how: How do I read this book of the Bible? I want to help them understand, for example, that the best way to read the Book of Romans is by breaking it down.

We’re working with Tyndale to have a print version of the Courage for Life Bible in the New Living Translation. It will be coming out after the first of the year. I worked with theologians and writers and even seminary professors, just making sure we were very theologically sound with the project.

What’s your ultimate hope for this project?

The work we’re doing is a true blessing. It’s a privilege to do what God calls us to do.

Courtney Ellis is a pastor and speaker and the author of Uncluttered (Feb. 2019, Rose Publishing). She lives in Southern California with her husband, Daryl, and their three kids. Find her on Twitter, Facebook, or her blog.

The Courage for Life audio Bible is available on iTunes, Android, or by texting the word BIBLE to 62953.