Home > 2010 > September
I Failed as a GardenerAmy Julia Becker
expand 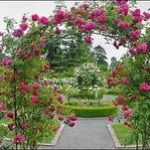 My mother gardens. She has gorgeous flower beds. Everywhere.

Zinnias and lilies and hostas and petunias and daffodils and flowers whose names I've never learned. When I was little, our backyard had more sunlight than it does now, so she also grew green beans and tomatoes and squash and zucchini and lettuce and herbs.

I remember that garden fondly, and I wanted to recreate it for our children. I wanted to give them the experience of pulling the strings off string beans and wiping the dirt off the yellow squash and watching for bugs and bunnies. I had dreams of our whole family feeling more connected to the source of our food, even if only on a symbolic level. I envisioned

vegetable casseroles and digging a second plot for more produce next summer.

And then the reality set it. The crab grass. The abundance of squash–all at once, growing so quickly I couldn't keep up no matter how many casseroles we ate. The need for water almost daily. The tomatoes that never ripened. The parsley. I don't even like parsley. Or green beans, for that matter. When we picked them, they sat in a pile in the refrigerator until they were so shriveled I had to throw them away. 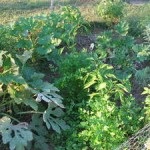 It's the end of the summer, and I have failed as a gardener:

There are all sorts of reasons. My priorities didn't include much time for weeding, for instance. It was easy to dash up the road to the local farm stand and select juicy fresh tomatoes and peaches and corn. The vegetable plot was too crowded for Penny and William to join me inside it. And my pregnancy gave me an excuse to avoid crouching down and tending it all.

But at the end of the day, I just don't delight in gardening. And since it is not a necessity, I don't do it. Next summer, we'll let the land return to grass and support the local farm stand even more frequently.

I don't want to make too much of my failed attempt here. But it does strike me that one of the images used throughout the Bible to describe God is a gardener, with human beings as the plants under his care. One of my favorite passages comes from Jeremiah 17:7-8:

But blessed is the man who trusts in the Lord, whose hope is in him.

He will be like a tree planted by the water that sends out its roots by the stream.

It does not fear when heat comes; its leaves are always green.

It has no worries in a year of drought and never fails to bear fruit.

I may have failed as a gardener. Thankfully, the same isn't true on a spiritual level. God is willing to endure the constant tending and watering and waiting and weeding, that we might grow and bear fruit.

Gardening
September 17, 2010 at 12:34 pm
To add a comment you need to be a registered user or Christianity Today subscriber.

I Failed as a Gardener

I Failed as a Gardener