Majestic Music of the King James

Paul K. JewettNovember 26, 1956
This article is from the November 26 1956 issue. Subscribers can read all of CT's digital archives.

On the eve of the release of the Revised Standard Version, Lowell Thomas, eminent news commentator, read excerpts from the Prophet Isaiah in the King James version and added—prophetically—“Pretty hard to beat.” Time has confirmed his judgment. The older version, like “ol’ man river, he jus’ keeps rollin’ along.”

It is easy to answer that the masses are prejudiced in favor of the old and suspicious of the new. But the King James itself had to begin as a lowly new version, pelted with charges of “bad theology, bad scholarship, and bad English.” It appeared without trumpet blast or public proclamation; it waged a running battle with the Geneva Bible for half a century and in this time completely took the field on the strength of its superior merit alone. In contrast to this the American revisers combined the advantage of organized sponsorship in high ecclesiastical places with access to a more accurate critical text, better scholarly equipment to understand Greek and Hebrew, and the lesson of the American Standard Version, “strong in Greek, weak in English.” And yet for all this, the King James, Gulliver-like, with its Lilliputian burden of colons and commas, verse and chapter divisions, is walking off with the victory. Why is this so? One reason that overshadows all others, it would seem, is the vastly superior literary quality of the older version. The King James is a work of art, the Revised Standard a compendium of scholarship; the one is literature, the other reading material.

To many, the element of literary excellence may seem inconsequential. Was not the New Testament written in vernacular Greek? Is not the Bible the book of the masses, and ...

Majestic Music of the King James

Majestic Music of the King James
expand
hide this 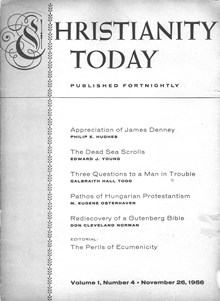 This article is from the November 26, 1956 print issue. Subscribe to continue reading.