The EditorsJune 18, 1965
This article is from the June 18 1965 issue. Subscribers can read all of CT's digital archives.

Evangelical Protestants are increasing their study of larger possibilities for transdenominational cooperation, and a wide door of opportunity may be swinging open for champions of biblical concerns and historic Christian convictions.

In the present ecumenical arena, over which floats the banner of a Protestant-Orthodox pluralistic theology lacking in evangelistic spirit, the substance of evangelical witness has become distressingly thin. But the religious scene in America now shows signs of a new polarization that may in the long run prove as noteworthy as long-standing denominational structures and more recent ecumenical mergers.

This growing desire for coordinate evangelical witness coincides with the emergence of obstacles in American ecumenism. Despite the widely publicized “ecumenical tide” in the United States, membership in the National Council of Churches in 1964 included a smaller percentage (61.7) of the Protestant-Orthodox population ... 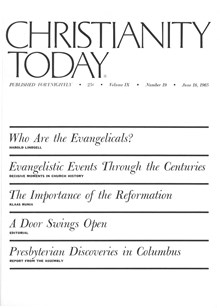 This article is from the June 18, 1965 print issue. Subscribe to continue reading.