In this issue we bring to our readers two essays dealing with the knotty problem of government aid to parochial schools. While the Roman Catholic Church has been the most vocal agency favoring government subsidies of various kinds, some Protestant groups feel the same way. Two questions are involved in this dispute, one constitutional and the other ethical. Even if the Constitution did not erect a wall between church and state, it might still be undesirable to use public monies for non-public education. Our readers can judge for themselves the merits of the opposing essays. And we will wait eagerly for reactions.

Paul Rees’s delightful Easter essay will be appreciated by all. In Current Religious Thought John Montgomery continues his discussion of Lutheran ecumenicity. We have been promised an essay that will open up the issue of altar and pulpit fellowship between the Lutheran Church—Missouri Synod and the American Lutheran Church from the perspective of those who regard it favorably.

The April 11 issue will include the long awaited essay on tongues, plus one on evolution and the Christian faith. 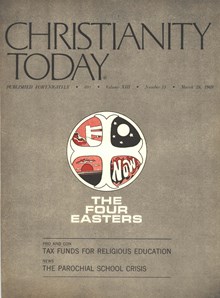 This article is from the March 28, 1969 print issue. Subscribe to continue reading.