Mind-boggling reflection.
Lon WoodrumApril 12, 1974
This article is from the April 12 1974 issue. Subscribers can read all of CT's digital archives.

‟Science, in its brash, spirited explorations of the far reaches of the cosmos, suddenly, to its own amazement, arrived at what may be the ultimate boundary—the very edge of the universe.” So wrote Edward Edel-son, science editor of the New York Times (Saturday Review/World, Oct. 23, 1973). Whether or not man has come upon the far limits of the universe, he has certainly come upon some awesome things and mighty happenings in the cosmic distances. He has found quasars, pulsars, supernovas, galactic clusters, neutron stars, and black holes!

Consider a quasar. It is one of the biggest and most distant bodies in space, capable of producing more energy than a billion suns.

Contemplate a pulsar, the residue of a star that has burned out but still whirls in space with terrific speed. At its center is a density that is mind-staggering: one cubic inch may weigh a billion tons!

Consider also the black holes. Some collapsing stars have such gravitational pull that even light waves are kept in so that they are invisible. They keep on collapsing forever, leaving only a “black hole” in the universe.

Out in space awesome galaxies are ripped asunder by unimaginable agitation; and there are immense clouds of dust and gas that give birth to countless worlds.

Dr. Allan Sandage of Cal Tech believes that the quasars, which are farther out from us in space than any other matter, may well be the last outposts of creation. They may stand at the edge of the universe. Beyond them, perhaps, is nothing at all—just empty infinity.

But as much as the scientists have learned about the universe, many mysteries remain. The majority of the scientists accept the “big bang” theory as the explanation for the origin of the universe. The cosmic mass was once jammed ...

Beyond the Quasars
expand
hide this 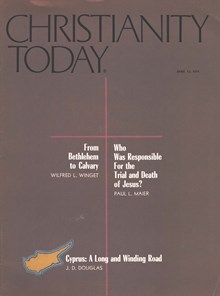 This article is from the April 12, 1974 print issue. Subscribe to continue reading.