Togo: Expulsions Are Less than Meet the Eye

W. Harold FullerApril 20, 1979
This article is from the April 20 1979 issue. Subscribers can read all of CT's digital archives.

Contrary to a report in an American religious periodical, religious liberty continues in Togo, a tiny (30,000 square miles) West African republic. Observers here report that the religious groups expelled last October were mostly spiritualist groups with Ghanaian leadership. The Togo government apparently questioned both the morals and the political bias of the groups.

The anti-Communist American paper reported that “all Gospel churches” were banned by the socialist government. The seventy missionaries in Togo, many of them evangelicals, deny this, pointing out that there are still a number of churches, including Baptists, Assemblies of God, Methodists, Evangelical Presbyterians, Roman Catholics, Seventh-day Adventists, and French Reformed.

“Togo has a socialist government, but it is more nationalist than Marxist,” report observers, adding that “churches and missionaries have liberty to witness.”

Togo: Expulsions Are Less than Meet the Eye

Togo: Expulsions Are Less than Meet the Eye
expand
hide this 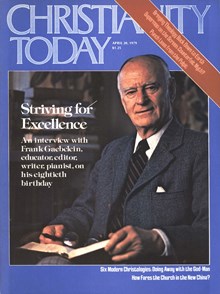 This article is from the April 20, 1979 print issue. Subscribe to continue reading.