The Pagans Next Door

David NeffApril 29, 1991
This article is from the April 29 1991 issue. Subscribers can read all of CT's digital archives.

Many evangelicals (rightly or wrongly) consider Wheaton, Illinois, the nerve center of evangelicalism. With historic Wheaton College and a host of mission agencies and Christian publishers in the neighborhood, there is a grain of truth in that notion.

But Wheaton may also be considered the navel of esoteric religion, for just blocks from CT’s offices sits the national headquarters of the Theosophical Society and their Olcott Library. (We’re told the society’s receptionists get phone calls for the Occult Library.) The society’s expansive lawns and patrician buildings contrast with the office-park functionality of nearby evangelical organizations, making those of us who commute past their brick-and-iron entry arch feel a bit envious.

Modern theosophy is a nineteenth-century esotericism that relied heavily on importing Indian and Tibetan religion. Its founder, Madame Blavatsky, claimed that Christianity “copied all its rites, dogmas and ceremonies from paganism”—except, of course, for eternal damnation and the pronouncing of anathemas. The Theosophical Society’s first leaders saw their mission as making the secret occult wisdom of the ancients available to humanity at large.

Well, that’s the “paganism” in CT’s back yard. There may be renewed interest in assorted forms of pagan religion—whether Celtic or Tibetan or Native American—in your neighborhood as well. We recommend Dave Bass’s essay, “Drawing Down the Moon” (p. 14), as a good introduction to this revival of the true faith’s ancient competition.

The Pagans Next Door

The Pagans Next Door
expand
hide this 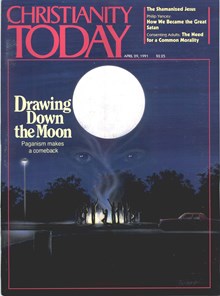 This article is from the April 29, 1991 print issue. Subscribe to continue reading.