Smut Tax Raises Questions, but Not Revenue
by Gordon Govier in Madison, Wisconsin.June 15, 1998
This article is from the June 15 1998 issue. Subscribers can read all of CT's digital archives.

Because pornography is cited as a cause of spouse and child abuse, Wisconsin State Rep. Dean Kaufert thought taxing smut might be a good way to raise up to $1.5 million per year to help its victims.

Legislative colleagues agreed, and Gov. Tommy Thompson signed a law that would add a 5 percent tax to sexual products and services that are "harmful to children." But state officials had no guidelines on how to implement the law.

"We had some difficulty coming up with language that is going to meet the constitutional test in the eyes of the Department of Revenue," says Kaufert, a Republican from Neenah. "It's the first in the nation and we want to do it right."

The law did not cover pornographic movies or magazines because of First Amendment issues. It specifically targeted cover charges at strip clubs, but those businesses quickly devised loopholes. Kaufert wanted to include sex toys sold at pornographic video outlets, but lingerie dealers convinced lawmakers to back off.

Marvin Munyon of the Wisconsin Family Research Institute doubts that the legislature will resurrect the issue. "It will probably fizzle out because they can't figure out what is pornography and what isn't," Munyon says.

Smut Tax Raises Questions, but Not Revenue
expand
hide this 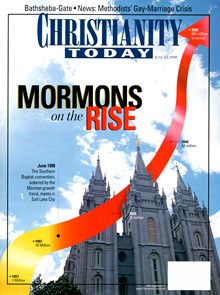 This article is from the June 15, 1998 print issue. Subscribe to continue reading.