Two churches long associated with Babywise author Gary Ezzo denounce his character and fitness for Christian ministry.
By Kathleen TernerNovember 13, 2000
This article is from the November 13 2000 issue. Subscribers can read all of CT's digital archives.

Two California churches have issued statements saying that Gary Ezzo, president of Growing Families International (GFI), is unfit for Christian ministry. Both of the churches have interacted closely with Ezzo.

Ezzo and his wife, Ann Marie, developed the popular yet highly controversial infant-feeding program outlined in Preparation for Parenting. They also developed the bestseller On Becoming Babywise and several church-marketed programs for parents, including Growing Kids God's Way.

The elders of Living Hope issued a statement saying they believe Ezzo is "biblically disqualified from all public ministry" because of a lack of truthfulness, Christian character, and accountability.

Two other congregations have taken similar punitive measures against Ezzo in the past 20 years.

Living Hope is the congregation to which Ezzo said he was accountable when Sun Valley's Grace Community Church, pastored by author John MacArthur, severed its support for Ezzo and GFI.

Grace Community is where Ezzo served as a staff member and first developed his parenting programs. Grace disavowed all association with GFI in October 1997, publicly rebuking him due to divisiveness.

Grace Community also rejects GFI curriculum. "[Ezzo] failed to draw a clear line between what is biblical and what is his preference," Phil Johnson, an elder at Grace Community, told the Southern California Christian Times in September. "The whole thing is fraught with danger. It obscures what is biblical."

MacArthur issued a second statement on July 25, saying he believes Ezzo is disqualified "from Christian leadership ... 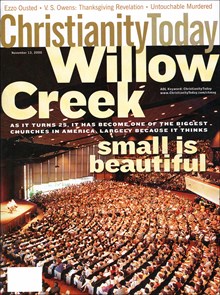 This article is from the November 13, 2000 print issue. Subscribe to continue reading.