October 1, 2001
This article is from the October 1 2001 issue. Subscribers can read all of CT's digital archives.

In late July, Muslim extremists bombed Mount Carmel Catholic Cathedral in Jolo in the southern PHILIPPINES. No one was killed in the bombing. Those behind the attack are suspected of being members of Abu Sayyaf, a radical group seeking independence. Abu Sayyaf abducted American missionaries MARTIN AND GRACIA BURNHAM in May. Abu Sayyaf says it will burn Christian churches in the region until the government ends military actions against the group. The Burnhams are still captive and are believed to be well, New Tribes Mission reports.

JOE HALE, general secretary of the WORLD METHODIST COUNCIL (WMC), has retired after 25 years with the organization. During Hale's tenure, the WMC petitioned South African presidents Botha and de Klerk to end apartheid. In July, Hale received the World Methodist Peace Award for "valiant leadership as a proponent of peace and ecumenical unity throughout the world." George Freeman, superintendent of the Charlotte District of the United Methodist Church's Virginia Conference, succeeds him.

Doctors in CHINA's rural Huaiji province will perform 20,000 FORCED ABORTIONS and sterilizations before the end of the year because of a new edict from authorities. The government does not usually enforce the national one-child policy in areas where families depend on children for farm labor, but census data show that the average family in Huaiji has at least five children. More than 30 million abortions are performed in China each year, according to the Alan Guttmacher Institute.

The Sunday Telegraph of London reports that county officials travel to remote villages with ultrasound equipment to examine women. "What is happening here is the census came out, and this one region had a lot more babies than they were allowed," ... 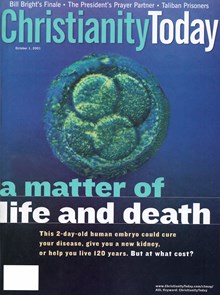 This article is from the October 1, 2001 print issue. Subscribe to continue reading.