But sanctions are at President's discretion
Tim CallahanDecember 9, 2002
This article is from the December 9 2002 issue. Subscribers can read all of CT's digital archives.

Two million people have died and four million have been displaced in Sudan's 19-year civil war. The Islamic regime, whose power is centered in the north, is seeking to impose Muslim law on the mainly Christian and animist south. The regime has broken two truces since September.

Faith McDonnell of the Institute on Religion and Democracy was jubilant about the new law, saying, "I believe the government of Sudan needed an incentive to understand we are serious about peace."

Other observers say the law will do less than advertised. The act (H.R. 5531) condemns human rights violations. It gives the Muslim government six months to begin negotiating an agreement with the rebels. If Sudan fails to negotiate in good faith or blocks humanitarian efforts, the President may choose among several actions: imposing sanctions (including an arms embargo), downgrading diplomatic relations, denying access to oil revenues, or blocking loans that come through international financial institutions. The act also authorizes $300 million in nonmilitary aid.

One of the bill's chief sponsors, Sen. Sam Brownback, R-Kansas, said the law "will be a valuable tool for President Bush, and will aid international efforts to stop the bloodshed."

The administration opposed a stronger, earlier House version. That bill would have prohibited oil companies or their subsidiaries that do business in Sudan from raising money in U.S. capital markets. The regime uses oil money to strengthen its military (CT, Sept. 9, p. 19). 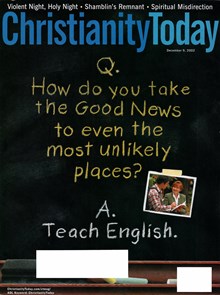 This article is from the December 9, 2002 print issue. Subscribe to continue reading.