For composer John Debney and vocalist/lyricist Lisbeth Scott, the creative talent behind the soundtrack to The Passion of The Christ, scoring the epic film was the experience of a lifetime.
by Mark Moring |August 31, 2004

Now that The Passion of The Christ is out on video, millions will bring the film into their homes, many seeing—and hearing—it for the first time. They'll not only see a graphic but soul-stirring movie about Christ's last hours on earth, but they'll also hear an emotive score that director Mel Gibson says "made my film ten times better." The music was written by veteran film composer John Debney (Bruce Almighty, Elf, The Scorpion King, Princess Diaries 1 & 2), and the lyrics were written by Debney and accomplished singer/songwriter Lisbeth Scott, who also sung throughout the film—in Hebrew and Aramaic. Just before The Passion released to video, the film's soundtrack—which spent three weeks at No. 1 on Billboard's soundtrack charts—reached gold status (more than 500,000 sales), and strong sales continue. We recently talked to Debney and Scott—who sounded like each other's biggest fans during our conversation—about The Passion, the making of the soundtrack, and God's leading hand throughout the process.

The Passion of The Christ was a huge box office hit. Were you surprised at its success?

I was absolutely stunned with the level of success. I hoped people would see it, get what they could out of it and generate discussion—all the good things that can come of seeing art.

All of us who worked on it knew we were working on an incredible moment in history. But none of us really knew the extent to which people would embrace it, because I've seen such beauty and grace in many art forms go unnoticed before in this society. I knew this film was an incredible piece of work from all angles, but I didn't know just how much the world would see that. 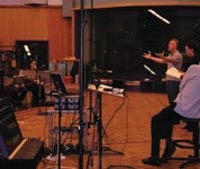