If we forget The Chronicles of Riddick—and odds are you had until I mentioned it just now—this is turning out to be a good summer for sequels, from big-budget blockbusters like Spider-Man 2 to small art-house films like Before Sunset. Somewhere between the sensibilities of those two flicks lies The Bourne Supremacy, an intelligent, action-packed thrill ride which also has the documentary-like feel of a European travelogue. Unlike, say, the James Bond films, which are loaded with product placements and pyrotechnics, and which gravitate toward famous tourist attractions like the Millennium Dome and the Eiffel Tower, the Jason Bourne movies are filmed in a more naturalistic style, and are grounded in more mundane yet familiar locations—train stations, hotels, and housing projects that are believable precisely because they don't seem to have been dressed up for a movie.

Matt Damon and Franka Potente on the run

Matt Damon returns as Jason Bourne, the amnesia victim who discovered, two years ago in The Bourne Identity, that he was, until his memory blanked out, a highly-trained assassin working for an ultra-shadowy branch of the CIA. When last we saw him, that branch had been shut down and his boss (Chris Cooper) bumped off, and Bourne himself had turned his back on his former life and settled down to a life "off the grid" with Marie (Franka Potente), the German woman who not only helped him stay one step ahead of his former colleagues but also humanized him, making him less of a killing machine and more of a person.

Alas, any chance of a happy-ever-after is ruined when a Russian assassin named Kirill (The Lord of the Rings' Karl Urban) begins killing CIA operatives and leaving clues behind, including fake fingerprints, that point to Bourne. This prompts ... 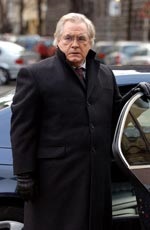