There has always been something a tad absurd about The Stepford Wives, even once you accept its science-fiction premise, but the new film pushes the concept way, way over the top. The original novella by thriller writer Ira Levin (Rosemary's Baby, The Boys from Brazil) tapped into feminist fears that men would gladly exchange their flesh-and-blood wives for domesticated, hyper-sexual robots if they could, and the 1975 film directed by Bryan Forbes went on to emphasize the even deeper horror that takes place within the men themselves: it is one thing to be killed and replaced by a machine, but it is quite another to allow your own soul to be twisted against your conscience. These days, however, it seems the battle of the sexes is either so complicated or so passé—take your pick—that the only thing a mainstream film can do with the subject is to make fun of it all. So, in the hands of Frank Oz—the Muppeteer who gave life to Fozzie Bear, Miss Piggy and Yoda, and the director of the campy musical version of Little Shop of Horrors—The Stepford Wives has become an out-and-out comedy. 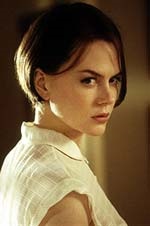 And as comedies go these days, it's actually fairly funny, albeit in a light, superficial way which either hides or exposes the fact that the plot is a thick tangle of mutual contradictions and the social commentary is pretty much all over the place. No doubt the incoherence on display can be blamed on the reshoots that reportedly plagued this production, but one does have to wonder how much of the credit, if that's the word, should go to screenwriter Paul Rudnick (In & Out), whose work in the past has shown a similar preference for zingers over narrative logic.

The first sign that the new film has pretty much nothing to do with the real world comes in the opening scene, in which Joanna Eberhart (Nicole Kidman), now no longer a freelance photographer but the ultra-successful president of a top-rated television network, promotes a new batch of reality-TV shows that all hinge on female empowerment. (In real life, of course, shows that explicitly pursue the gender angle—like Who Wants to Marry a Multimillionaire? and The Swan—have taken the exact opposite tack and perpetuated the very stereotypes that feminists fought thirty years ago.) Joanna's plans are brought to a crashing halt when a man who appeared on one of her shows turns up, brandishing a gun and crying, "Let's kill all the women!" Fearing lawsuits, the network cancels all of Joanna's shows and lets her go—much to her shock. 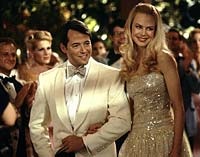 Looking for a change of pace, Joanna and her doting husband Walter (Matthew Broderick) move with their family to Connecticut, and to the gated community of Stepford. At first, Joanna is weirded out by the buxom, blissed-out women in the floral-print dresses, but then she tries to fit in, baking cupcakes and knitting and performing various other tasks while Walter spends his time at the Men's Association, a club whose leader, Mike Wellington (Christopher Walken), offers Walter the chance to give his wife a mechanical upgrade. Earlier versions of this story kept Walter's activities at the club an ominous secret, and one that left him shaking; but in this film, he watches a man withdraw money from a woman's mouth as though she were an ATM, and his eyes go wide with appreciative wonder. Later, when his son is playing and idly remarks that robots are cool, Walter grins with anticipation. Ha, ha, ha.

Joanna does not entirely conform to the Stepford way of life, thanks to two other relatively new arrivals in town—Bobbi Markowitz (Bette Midler), a sassy Jewish author, and Roger Bannister (Roger Bart), a flamboyantly gay man—who bring a bit of spice to her life and keep it unpredictable. But one by one, Joanna's friends are Stepford-ized. Roger, who says there has been trouble in his relationship with his partner Jerry (David Marshall Grant) ever since the latter became a "gay Republican" (which Roger likens to being "gay with bad hair"), even becomes that rarest of specimens, a conservative politician who is both proudly gay and religious. And ultimately, Joanna too comes face-to-face with what her hubby has planned for her.

This is the point where earlier versions of the story pretty much came to their eerie end. But the new film gets to this point awfully quickly, and it keeps right on moving, into a new act that takes all the assumptions and premises of the earlier scenes and earlier versions of this story and blows them all right out of the water. You think the story is all about the subjugation of women by men? Think again. And as much as the new denouement may contradict the premises set down by the rest of the film, it does hark back, thematically, to those opening scenes at the network, where the only executives we see all happen to be female. The world of plastic smiles and simulated perfection, the film seems to be saying, may ultimately be something women impose on each other.

Pretty little robots, all in a row

The film does touch on other current trends, such as the quest for spiritual stability through pharmaceuticals and medical treatments, all of which may tend to reduce human beings to the equivalent of machines that need fixing, as well as the growing interest in robotic pets and automated devices that talk back to us, which raises interesting questions about the kinds of attachments that are developing between humans and machines—and the effect these attachments may have on our human relationships. But it touches on these things very, very lightly. In the end, the film is much more interested in lampooning traditional gender roles, and the debates around them, than in worrying about such things.

The Stepford Wives is rated PG-13 for "sexual content, thematic material and language." The characters often talk about sex and on one occasion they overhear a couple having sex. Some of the humor also revolves around the physical endowment of the robot wives. One of the main characters is a gay man who keeps pictures of Lord of the Rings co-stars Orlando Bloom and Viggo Mortensen; he later runs for political office, touting the "power of prayer" and thanking his gay "partner in life, and partner in the Lord." Except for the opening scene in which a man tries to assassinate Joanna, there is little violence, and most of it is directed against the robots, one of which loses its head, while another sticks its hand in a fire without noticing.

When The Stepford Wives was first published, and when the first film version came along in 1975, it carried with it an anti-establishment attitude, lampooning a chauvinistic society that kept women from seeking careers or from thinking for themselves. Now, it's been re-made under the direction of Frank Oz, the Muppeteer who gave voices to Fozzie Bear, Miss Piggy, and Yoda, and who went on to direct such comedy hits as Dirty Rotten Scoundrels, In & Out, and Bowfinger.

Nicole Kidman plays Joanna Eberhard, a successful TV producer who suffers a nervous breakdown and moves away with her husband (Matthew Broderick) to a community that presents her with a whole new set of challenges. The women of Stepford seem programmed for strange behavior and early demise. The more she gets to know these women (Glenn Close plays the ringleader), the more Joanna suspects there is something sinister at work behind the scenes.

Mainstream critics are giving the film mixed reviews, praising the stars and acknowledging the laughs, but observing that this satire's time may have passed. It may be that the film is no longer criticizing an oppressive system so much as it is mocking the choices of some women to pursue marriage and motherhood.

Peter T. Chattaway (Christianity Today Movies) discusses the themes and contexts of the original story and its first film version. He observes that this new version is playing to a different audience. "These days … it seems the battle of the sexes is either so complicated or so passé—take your pick—that the only thing a mainstream film can do with the subject is to make fun of it all. So … The Stepford Wives has become an out-and-out comedy. And as comedies go these days, it's actually fairly funny, albeit in a light, superficial way which either hides or exposes the fact that the plot is a thick tangle of mutual contradictions and the social commentary is pretty much all over the place. In the end, the film is much more interested in lampooning traditional gender roles, and the debates around them, than in worrying about such things."

Michael Elliott (Movie Parables) says the filmmakers "misstep badly with this adaptation of the classic women's lib horror film. The original film was chilling in its depiction of women being mechanized into subservience by the husbands who resented gender equality. The remake instead tries to go for the laugh but absolutely fails to satirize or spoof the original. This film does not even attempt to comment upon the feminist movement or the woman's role in the world. If anything, this version of The Stepford Wives is about the stupidity of men."

Michael Ray (Hollywood Jesus) says, "The movie never settles into a distinct tone. The comedy is forced … and the dark aspects aren't dark enough. Sadly, the movie gets lost in a mess of its own cuteness, Hollywood shine, and worst of all—it suffers from a lack of inspiration."

Annabelle Robertson (Crosswalk) says the movie "missed a great opportunity to update its message and speak to the very modern issue of what it means to be real in a superficial world. It also could have explored what postmodern husbands expect of their wives, in terms of love, honor and respect, as they face the shared responsibilities of family life in an increasingly hectic society."

Bob Smithouser (Plugged In) observes that it "reinforces the notion that a homemaker is a slave bound by apron strings threatening to cut off circulation to the brain. It also does its best to emasculate and vilify husbands. Other targets include Republicans, corporate America, and insensitive Christians."

1 of 3
Joanna (Nicole Kidman) realizes something's not quite rightMatthew Broderick plays Walter, Joanna's husbandPretty little robots, all in a row