In his first feature film since Lord of the Rings, Viggo Mortensen is an adventurous cowboy in Hidalgo, a yarn that doesn't get all the facts right. But that's just fine with this myth-loving leading man.
by Jeffrey Overstreet|March 5, 2004

"I don't have any long range plans," says film star Viggo Mortensen, his voice as hushed and calm as Aragorn's. "I'm not signed up for any other movies. I haven't had time."

It's hard to believe that the man who played the hero of the title in The Lord of the Rings: The Return of the King would not be the headliner in a parade of upcoming films.

But Mortensen is not what Tolkien's Treebeard would call "hasty." He approaches his career the way he approaches others. He's a quiet, thoughtful man, approachable and easygoing, free of the arrogance and attitudes that sour so many celebrities. A couple of weeks after this interview took place, Mortensen and the rest of Peter Jackson's "fellowship" won Oscars for their third and final Tolkien adaptation. But it was clear at this particular meeting that Mortensen had already put Middle-Earth behind him. Now, he's focusing on his passions and enjoying the ride.

This interview, taking place in a sun-drenched room of Seattle's Fairmont Hotel, was just the latest stop on a whirlwind promotional tour for Mortensen's new film Hidalgo. And he makes it very clear that he wouldn't be doing this kind of thing if he were not happy with the movie. "I have a hard time trying to sell someone on something anyway … but at least it's a movie I like. Otherwise I'd have to be talking about something else: Seattle, the weather…. I like Hidalgo. I think it works on a lot of levels."

The tour has taken its toll. "Literally, every day for the past few months … it's almost been a different place every day, or for two days, or going to the airport. I never thought it would be possible, but I've been to more countries and more cities for Hidalgo than I ever visited for The Lord of the Rings. ...

Tags:
None
Posted:
March 5, 2004
More From: by Jeffrey Overstreet 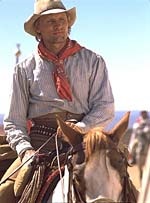