Is it possible to make a good movie for a measly $7,000? Yes. Shane Carruth proves it with his film debut, Primer, which is stirring up buzz-the good kind-at film festivals everywhere.
interview by Mark Moring|October 22, 2004

In a day when blockbuster movies often cost well over $100 million to make, a "low-budget" film might cost, say, less than $5 million. Rare is the film that cost less than a "measly" $1 million. There's the occasional shoestring budget smash hit, like 1999's Blair Witch Project, which was made for $40,000. But now along comes Shane Carruth, an introspective dreamer who has proven you can make a good movie for $7,000. That's not a typo: Carruth made Primer, his film debut, for seven thousand bucks. Carruth, 31, took three years, working 18-hour days, to make the film, wearing just about every hat himself; he conceived it, financed it, wrote the script, directed, edited, scored it and even acted in it, playing one of the lead roles—all (mostly) to save money. The result is a heady-but-quirky sci-fi gem that is fast gaining acclaim, winning the Grand Jury Award at Sundance, and receiving high marks at other festivals and by critics everywhere.

Primer (PG-13) features two young engineers, Aaron (Carruth) and Abe (David Sullivan), who work for a large corporation by day and do experiments in the garage at night. When one of their experiments turns into a time machine, the guys discover they can have anything they want. Taking advantage of the opportunity is their first challenge; dealing with the consequences of their choices is the next. It's a fascinating story, though not a simple one. Esquire exclaimed, "Anybody who claims they fully understand what's going on in Primer after seeing it just once is either a savant or a liar." But Esquire also called it "the headiest, most singular science-fiction movie since Kubrick made 2001." Heady praise indeed. 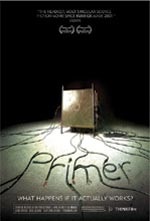