Subjective and Objective Perspectives in The Passion of The Christ

The Passion of The Christ takes the subjectivization of Jesus even further, while at the same time restoring some of the divine objectivity that has been missing from recent films. Director Mel Gibson starts the film on a very human note, by beginning with Jesus's last moments before his arrest in Gethsemane. This episode, as we have seen, is one of a handful that have allowed filmmakers to underscore the humanity of Jesus without straying from the biblical text; however, Gibson adds a few details that emphasize his humanity even more. Jesus, played with emotional intensity by James Caviezel, is first seen praying fervently. Then he goes to check on three of his disciples, who have fallen asleep. These three are members of Jesus's inner circle and are closer to him than the other apostles; when one asks if they should alert the others, Jesus replies, "No, John. I don't want them to see me like this." This unique bit of dialogue emphasizes the very human, and very intimate, bond between Jesus and these fellow human beings. 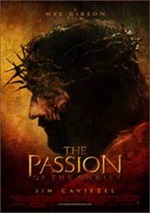 Similarly, the first flashback emphasizes the bond between Jesus and his mother, Mary, in an earlier time when Jesus was a carpenter plying his trade and had not yet embarked on his ministry. The scene underscores the humanity of Jesus partly by underscoring his physicality: He sits and hops on the table he is building, to test its strength; he splashes Mary with water; he even draws her to him and gives her a playful kiss. In one striking sequence, Mary and Jesus peer at each other through the table's decorative carvings, their eyes framed in a way that suggests they see and know each other in a special, intimate way that no one else can share.

The subjectivity and humanity of Jesus are also conveyed through the prayers he offers at various points throughout the film. Before he is scourged, he prepares himself by whispering "My heart is ready, Father. My heart is ready." And as he holds his cross for the first time and embraces it, he says, "I am your servant, and the son of your handmaiden." Although these prayers are perfectly consistent with the orthodox Christian belief in the divinity of Jesus, the use of first-person pronouns and the references Jesus makes to his "heart" and to his earthly mother draw our attention primarily to his humanity and to his submission, as a human, to the will of God.

But the most significant, and most cinematic, technique through which Gibson encourages our subjective identification with Jesus is his use of point-of-view shots and flashbacks. Gibson uses point-of-view shots from the very beginning of his film, when Jesus is praying in Gethsemane and looks up at the moon. In later scenes Jesus goes on to draw strength from some of the other people and objects that he observes. As the priests make their charges before Pilate, Jesus looks up and sees a dove flapping its wings, which presumably represents the Holy Spirit. Later, after the Roman soldiers have beaten him with rods, Jesus sees Mary watching him from the crowd, and the sight of her empowers him to pull himself up and stand tall before the next round of beatings begins.

Sometimes the point-of-view shots encourage us to share with Jesus in his suffering. When Judas runs away after betraying Christ, he looks over his shoulder in the direction of the camera, and the film cuts to a shot of Jesus's face, marked by sadness and disappointment—indicating that the earlier shot of Judas also was seen from Jesus's own perspective. After the scourging, Jesus is dragged on his back out of the courtyard, and we see it from his point of view, upside-down. Similarly, there are several point-of-view shots of the hostile crowds and the backs of the Roman soldiers as Jesus carries his cross—and when Jesus falls over on his back, we see another point-of-view shot as the world turns upside-down. All of these images enable us to share in the frailty and disorientation that Jesus experiences in those moments.

Gibson also reverses the visual approach of earlier films such as The Greatest Story Ever Told. In that film, George Stevens invited us to gaze at Jesus by pointing the camera directly at his face and by keeping the face of Jesus alone within the frame; he also differentiated Jesus from the other characters by shooting their faces from a slight angle and allowing the back of Jesus's head to occupy one edge of the frame. But Gibson does the exact opposite with the healing of Malchus, the temple guard whose ear is cut off by Peter in Gethsemane: When the camera points at Malchus, it looks directly at his face, which is isolated within the shot; and when the camera points at Jesus, it looks at him from more of an angle, with the back of Malchus's head visible on the right side of the frame. Instead of gazing directly at an otherworldly, objectified Jesus, we are encouraged to see other people through Jesus's eyes.

Point-of-view shots are also key to the film's use of flashbacks. Every flashback represents a memory, and each memory is triggered by something that someone witnesses during the events between the arrest and death of Jesus. Jesus himself has several flashbacks, nearly all of which are preceded by point-of-view shots. When he observes a carpenter in the Temple, he thinks back to his own days as a carpenter. When he falls to the ground during the scourging and sees the soldiers' feet, he thinks back to that moment during the Last Supper in which he taught his disciples to be servants by washing their feet. When he observes the bowl in which Pontius Pilate is about to wash his hands, he thinks back to the washing of hands that took place during the Last Supper. When he carries his cross and sees the hostile crowds filling the streets of Jerusalem, he thinks back to his triumphal entry, when just a few days before people welcomed him with palm branches. When he leaves the city and sees Golgotha in the distance, he thinks back to the sermon he gave on another mountain, about forgiving one's enemies. The cumulative effect of all these flashbacks is to give us the feeling of being drawn into the flow of Jesus's own thoughts; thus, the film subjectivizes Jesus and draws us toward his humanity.