Ken Carter made headlines when he benched his high school basketball team for failing to make the grade, a story told in Coach Carter, opening Friday. We talked to Carter about the film and his journey.
by Mark Moring |January 11, 2005

Ken Carter made national news in 1999 when, as the boys basketball coach at Richmond (CA) High School, he benched his entire team for not meeting his academic standards.

Carter decided the school's 2.0 minimum grade point average wasn't demanding enough, so he raised the bar to a 2.3, insisting that every player meet that goal, or no one would play. Halfway through the season with an undefeated team, several players missed the 2.3 mark-and Carter locked the gym and called off all practices and games. The move was unpopular with the players, their parents, the community and, surprisingly, even Carter's fellow teachers. He received harsh criticism in the Richmond community, but high praise throughout the nation for sticking to his principles.

The true story is coming to the big screen this week in Coach Carter, a Paramount Pictures film starring Samuel L. Jackson in the lead role. Jackson has said, "This is definitely not your typical story, and Ken Carter is not your typical guy. Both the story and Ken are about teaching young people to expect more from themselves and to see beyond their present."

We wanted to know more about the man behind the story, so we talked with Carter, who says Jackson was the only name on his "very short list of actors" he wanted to portray himself in the film. Carter, who insisted that his players call him "Sir," brought that same manner to our interview, using "Sir" frequently in our conversation.

How accurately do you think the film and Samuel L. Jackson portrayed you?

Ken Carter: Ninety-eight point five percent. I was there every step of the way with the production, with the writers, with Thomas Carter, the director. And Mr. Sam Jackson and I spent four months together going to basketball games and ... 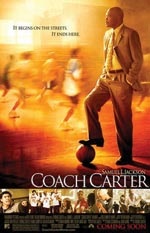