The Cost of Democracy

Christians suffer for joining the cry of 'Syria out.'
by Dale Gavlak in Amman, JordanApril 7, 2005
This article is from the May 2005 issue. Subscribers can read all of CT's digital archives.

Christians are suffering for their outspoken support of independence from Syria. Prominent Druze opposition leader Walid Jumblatt says Syrian-backed Lebanese security forces are now targeting Christians in the same way they targeted the assassinated former prime minister Rafik Hariri. A recent example: the Easter Eve bombing in a predominately Christian area north of Beirut. It was the third of fourbombings of a Christian area in two weeks.

The murder of Hariri, a Sunni Muslim businessman and Lebanon's best-known post-war politician, has sparked the largest popular democratic protests in the Arab world in modern times. The country's sizable Christian community has helped lead the charge by calling for the complete withdrawal of 14,000 Syrian troops and intelligence officers from Lebanon. The opposition also wants an international inquiry into the February 14 assassination of Hariri.

Evangelicals have joined their Catholic and Orthodox brothers and sisters in both political protests and corporate prayers.

"Of course we are involved," said a prominent female worship leader serving in both Catholic and evangelical churches who did not wish to be named. "But we are engaged as individuals, and not on a congregational level."

One evangelical pastor, who also requested anonymity, said the community has been galvanized to pray for Basil Fuleihan, the only Protestant evangelical member of Parliament, who was with Hariri and sustained serious injuries.

Patriarch Nasrallah Sfeir, who heads the country's 900,000-strong Maronite community (the largest Christian denomination in Lebanon), first championed Lebanon's independence more than five years ago. The 1989 Taif accord ended Lebanon's sectarian civil war. It called for the withdrawal of ...

The Cost of Democracy

The Cost of Democracy
expand
hide this 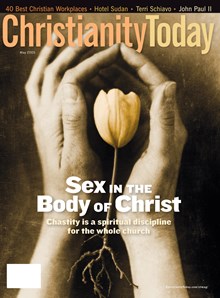 This article is from the May 2005 print issue. Subscribe to continue reading.