Fear Not the Disabled

We all benefit when people with disabilities are valued in our churches.
A Christianity Today EditorialOctober 25, 2005
This article is from the November 2005 issue. Subscribers can read all of CT's digital archives.

Imagine walking down the street and hearing a child say to his mother: "Mom, why does he walk that way?" Or, "Why is she in that wheelchair?" Or, "Why does he have that cane?" People with disabilities don't have to imagine such questions. They hear them regularly—at least those who can hear.

But it's not the queries of curious youngsters that bother those facing physical or mental challenges. It's the indifference, discrimination, or outright hostility that often comes from adults. During the public debate over Terri Schiavo, one especially blunt blogger wrote that Michael Schiavo had been "chained to a drooling [excrement]-bag for 15 years."

Blinded by media-induced visions of health and rugged individualism and by films such as Million Dollar Baby, many people see disability as a fate worse than death. Joni Eareckson Tada, left paralyzed after a diving accident 38 years ago, knows such private attitudes inevitably impact public policy.

In the debate over human embryonic stem cells, Christians are right to defend the humanity and dignity of the embryo. But our well-reasoned words are unlikely to convince people who fear disease and incapacitation if we do not also demonstrate real pro-life compassion for a whole class already here—people with disabilities.

These neighbors are all around us. And we must not, like the Levite and the priest in Jesus' parable, pass by on the other side of the road. There are an estimated 50 million people with disabilities of all kinds in the United States, and 600 million worldwide. Each one, to borrow a phrase from the late Mother Teresa, is Jesus in "distressing ...

Fear Not the Disabled

Fear Not the Disabled
expand
hide this 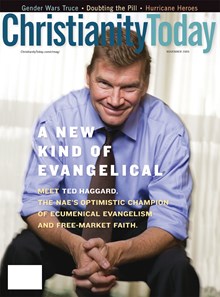 This article is from the November 2005 print issue. Subscribe to continue reading.